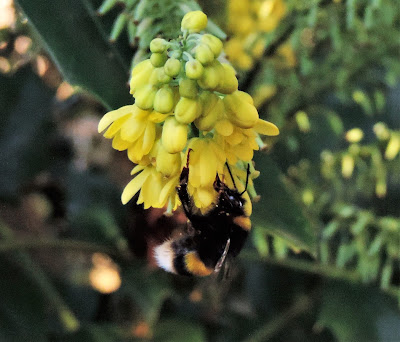 On milder days the flowers on the Oregon grapes in the garden are attractive to late flying bumble bees.  The example above is, as far as I can tell, a buff-tailed bumble bee (Bombus terrestris) worker.  One feature of this is that it has a very narrow band of buff hairs between the black and white bands at the end of the abdomen.  The species is also known to have a third, winter-flying generation whose workers visit oregon grape and other winter flowering shrubs.

This Oregon grape is Mahonia x media 'Charity' which originated in a nursery in Northern Ireland and was selected in a Surrey nursery.  We have several different Mahonia species and hybrids in the garden but 'Charity' is among the most attractive.  The fruit of Oregon grapes can be used to make jams, jellies and in other recipes.  It has both an Award of Merit and a First Class Certificate from the Royal Horticultural Society, so it ticks nearly all the boxes: ornamental evergreen foliage and fragrant flowers in winter; edible fruit; attractive to wildlife.

Posted by Patrick Roper at 6:54 pm