A memory of Rosebank 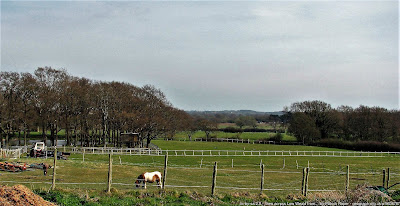 At Christmas in 2017 I came across this photograph which I had taken nearly ten years previously on 4 April 2008.  I had forgotten that I was ever there and would not have remembered where it was had I not been able to find details of my visit buried in my computer.  At first, I had no idea about when or why I had taken the picture, but I gathered fragmented recollections after a while.

The picture was taken looking east from an abandoned depot or lorry park called Rosebank beside the A22 just north of Polegate in East Sussex.  The fields run down to the Glynleigh Levels, a western branch of the larger Pevensey Levels, and the distant horizon is where the village of Hankham lies on a spur of higher land projecting northwards into the levels.  In the past it was spelt 'Handcombe' and was part of a 'Limb of the Cinque Port Liberty of Hastings'.  In the mid-distance the dark, straight hedge marks the line of the Cuckoo Trail, a cycle and pedestrian path along an abandoned track of the London-Brighton South Coast Railway.

This is a Low Weald landscape with little to excite the imagination: fields and trees (with a tree house), a Shetland pony, various fences and, on the left, a water-filled clay pit dug when the long-closed brickworks nearby was active.  Perhaps the significance of the scene is that it would not win any prizes, would not embellish the wall of a gallery or the page of a magazine.  Its somewhat nondescript virtues do, perhaps, have a Low Weald feel.

It is also represents only a fragment of time.  The camera shutter was open for maybe 100th of a second and that exact scene will never return.  It might be possible to go back to the site and frame a similar picture, but it would not be the same.  The pony would have gone, the tree house might not be there and the trees and fences would have changed.  And who knows what alteration might come over centuries and millennia?

The picture reminds me too of the huge volume of data that lies locked up in our brains because there is no reason or no one to open the door.  I have posted the picture in ‘the Cloud’, so others may look at it for one reason or another, but they will not have the memories I had of the afternoon I spent alone in that forgotten depot, recording the flora and fauna and its ecological significance for a proposed development.  As Virgil said sunt lacrimae rerum et mentem mortalia tangunt (there are tears in things and life’s transience moves the mind).
Posted by Patrick Roper at 3:55 pm