After the very wet autumn and early winter we entered a period of cold, dull weather, punctuated by rain and snow that seemed to go on forever and ever. As I write on Maundy Thursday the temperature has not exceeded 15⁰C since 24 October last year and there have only been 30 days rising to between 10 ⁰C and 15 ⁰ C. At night lowest temperatures seem to hover between -2⁰C and +2⁰C. There was heavy, drifting snow between 11 and 14 March and snow flurries on many days including today.

The problem is a huge anticyclone that delivers modest to strong winds from the east so that the wind-chill factor makes it seem much colder than the thermometer reading. Tonight a low of -1 ⁰C is forecast but the wind-chill will take it down to -4 ⁰C. According to the forecast the whole of April is likely to remain cold. The warmer, Atlantic weather lies to the south and, so the meteorologists say, the jet stream would normally have moved up to the north of Britain by this time of year allowing the milder westerly winds to move in. This may be a natural variation or something to do with the climate change phenomena of a warming ocean or more ice-free water in the Arctic. 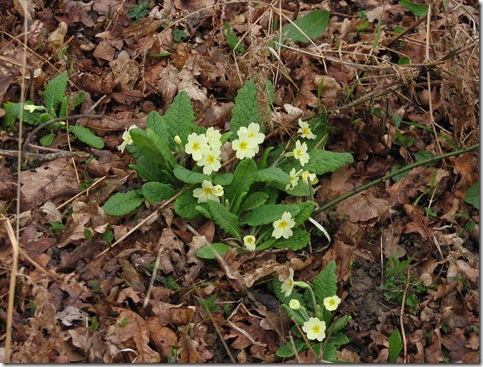 The countryside is variously affected. Spring flowers are coming out slowly and primroses are doing quite well, hazel catkins have struggled through and wood anemones are starting, but I have not seen any sallow blossom. The cherry-plums, Prunus cerasifera, are blooming well around Hurst Lane with their delicate white flowers coming maybe a week or so later than normal. However, the grass in the fields is not growing and insects are virtually absent which will be bad news for birds, some of which have already died of cold and hunger and must be particularly stressed if they have started nesting. An absence of early spring moths could mean a dearth of caterpillars just when the young birds need them and I wonder what might be happening to migrant species heading north from Africa. At least, on 5 March when the temperature topped 13 ⁰ C, I saw a fine male brimstone butterfly enjoying the sunshine at the corner of our local Churchland Lane and Killingan Wood.

Farming and gardening are also affected and, apart from poor sowing and growing conditions, there is no pleasure in pottering around the home plot. If I go outside, by the time I have written down the temperature, fed the birds and had a quick look at the houseleeks and other potted plants, it is time to head indoors. And, of course, it is not just Britain that is suffering. Much of Europe has been seriously affected and I have read that Russia is experiencing its coldest winter since 1938, the year I was born.

The seemingly endless cold, grey and windy weather is quite depressing and, with rising energy prices, expensive. We are currently using between £6 and £9 per day on electricity heating just one room and have a log fire most evenings, but even indoors I still have to have five or six layers of clothing on my upper body and thermal long johns and fur lined boots to keep warm.

The media tell us about records being broken and, apparently, it is the coldest winter since 1962/63 but the worst aspect is that it seems to go on and on in an unvarying way as though it is completely stuck with no intervening periods of warmth and sunshine as harbingers of better times. Very cold winters in the past have, in my experience, differed from this one with some nights of extreme cold bringing averages down. We have had nothing like the low temperatures down to -20 ⁰C that I have recorded here or at Robertsbridge in the past.

Posted by Patrick Roper at 11:06 pm No comments:

I fear the cold is taking its toll of some of our wildlife.

This afternoon I found this small, huddled corpse of a hedge sparrow in the log pile on the back wall of our house.  It must have crept in among the wood overnight, but the frost was just too much for it especially as it might have been weakened by hunger. 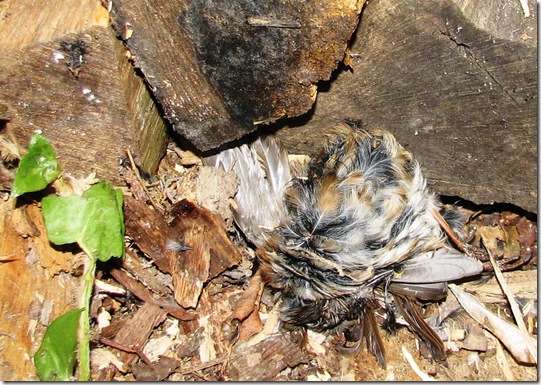 Tomorrow morning it will be gone: a tasty snack for a fox or badger.

Posted by Patrick Roper at 6:42 pm No comments:

Since 11th March we have had arctic weather, with snow, frost and fierce winds from the east and north.  Today it is melting quite quickly, though it is far from warm, making the drifts show up along the hedges and picking out shallow furrows across the fields with green parallels.

The animals and birds, some of which have already started nesting, are having a hard time and one of our garden wild rabbits climbed into a bush to browse on the rather unappetising looking shoots of a Coprosma from New Zealand. 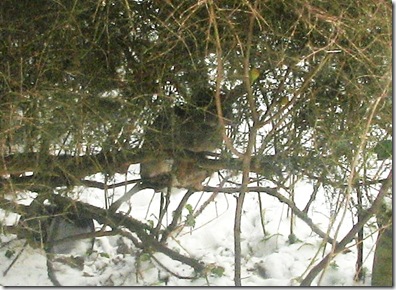 The squirrels seemed relatively untroubled and carried on scampering about and  twitching their snow sprinkled tails. 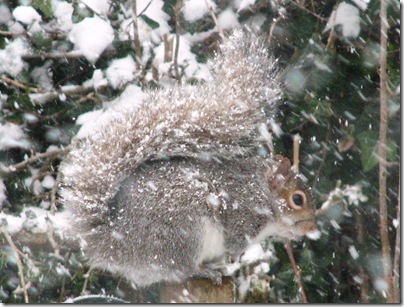 Posted by Patrick Roper at 4:24 pm No comments: