In mid-May the countryside is splashed with white as many of our native and exotic trees come into flower.  Round my circuit we have hawthorn (Crataegus monogyna), sour cherry (Prunus cerasus), Japanese snowball (Viburnum plicatum f. tomentosum 'Mariesii') and bird cherry (Prunus padus).

The hawthorn in the northern hedge (below left) flowers about 5 days earlier than those in the southern hedge and has differently shaped leaves, so it may have had a different, exotic origin (as is the case with so many hawthorns planted recently as hedges.) 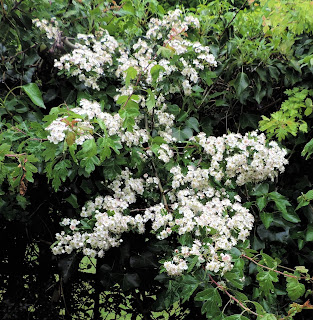 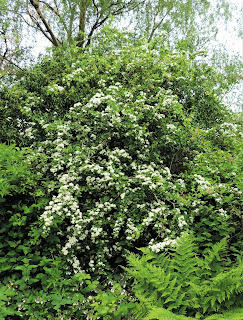 The morello cherry, or perhaps more correctly, the sour cherry has grown for many years in our southern hedge.  In the past there were many different cultivars in England and elsewhere, most of which now seem to have gone.

The name 'morello' seems to have been applied to one cultivar only but then became the name for all of them.  The word 'morello' is from the Italian and means 'small black', so true morello cherries should be very dark or black.  The fruit of ours is red, so it must derive from some other cultivar. 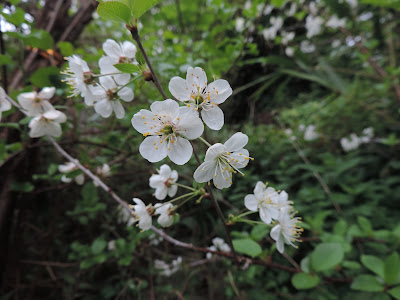 One of our most magnificent garden plants is the Japanese snowball 'Mariesii' (Viburnum plicatum f. tomentosum 'Mariesii)'.  The plant, which has an Award of Merit from the Royal Horticultural Society, was introduced by Charles Maries who collected in China and Japan in the late 19th century.  As well as fine flowers it has a lovely spreading tabular habit. 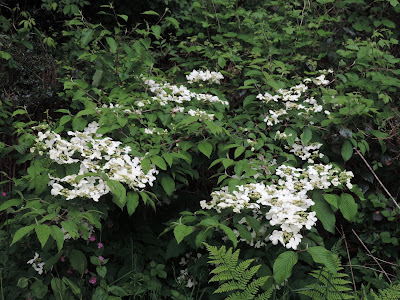 Finally among the white-flowering trees and shrubs is our old bird cherry (Prunus padus).  The word padus is ancient Latin for the river Po in Italy along whose banks many of the trees grow, but I found mine as a seedling in the Yorkshire Dales 40 years ago and it was planted to mark the grave of our cat called Big Bill.  He liked trying to catch birds, so a bird cherry seemed appropriate.  Its shape is such, with the first branches not much about ground level, that generations of children have had great enjoyment climbing it.  Often I have come home and heard, rather than seen, these youngsters chirruping away in the foliage like the singers I once saw in a tree in a performance of the Carmina burana by Carl Orff.  For many years the tree has flowered, often profusely, and when the wind blows the small white petals flutter onto the lawn like whirling snow. 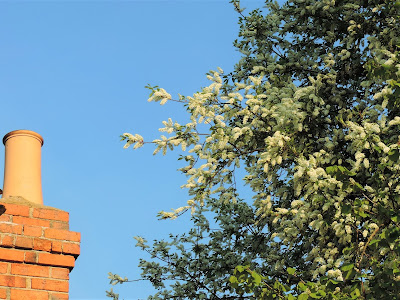 The 17th C  Flemish herbalist, Dodonaeus wrote that people planted them because "they were reputed to be highly effective in warding off sorcerers and malefactors", a sort of early Neighbourhood Watch.  Another source said that young girls who had been bewitched could stand under a tree before sunrise and shake it so that the dew fell on them.  Sounds like a good excuse for being out all night and getting wet.

The bird cherry is described as preferring moist woodland, scrub, stream sides and shaded rocky places, most frequently on damp calcareous or base-rich soils, while it avoids very dry or very acidic conditions.  Our tree, however, grows vigorously on a dry, acid, sandy soil.  I have often noted that plants which prefer specific habitats in the wild grow well in quite different conditions in the garden.  The explanation might be that there is a quite complicated limiting factor or factors. There might, for example, be a climatic phenomenon, or a disease every fifty or a hundred years or more that wipes out all examples except those growing in optimal conditions.  In other words the one in my garden might die due to 'growing in the wrong place', but those where mine originally came from survive.

There is a weevil Anthonomus rectirostris and an attractive little moth, the bird-cherry ermine (Yponomeuta evonymella), that both feed exclusively on bird cherry.  The gregarious larvae of the moth can completely defoliate a tree, as I once saw when we lived in the Peak District.  Neither species is found in Sussex as the tree is not considered a native species in the county, so we hope our bird cherry is safe from attack here.
Posted by Patrick Roper at 10:19 pm