We were digging about in the garden the other day when we discovered a nice crop of leek bulbs on the roots of a Babington's leek (Allium ampeloprasum var. babingtonii).  Leek bulbs form underground from the second year of growth of both Babington's and the ordinary garden leek.  In the past they were part of the vegetable armoury for the gardener and allotment holder, but in recent times they seem to have sunk into obscurity.  These bulbs are not formed in concentric rings like onions but have even white flesh all the way through like water chestnuts. 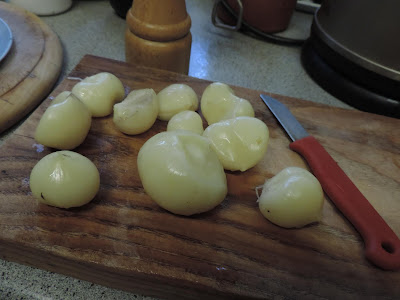 W.W. Weaver in his Heirloom Vegetable Gardening (Voyageur Press, Minneapolis, 2018) wrote: Leeks left in the ground to overwinter normally produce an epicurean delight the second year.  This is known as the "leek bulb", small bulbs that form about the base of the leeks that are ready to bloom.  Some of the bulbs can grow quite large, perhaps 1" in diameter, and make a perfect substitute for shallots.  The longer the leeks are in the ground, the larger the leek bulbs become, and they can be further increased by breaking off the flower spikes.

Babington's leek as a wild plant is endemic to south west Britain and Ireland but is widely available in the nursery trade.  The bulbs are quite mild tasting and, to me, somewhat of a cross between leek and garlic.  We used those illustrated above to make leek and potato soup with 50% bulbs.  It was very good.  Here is the recipe:

Unpeeled potatoes give a slightly earthy flavour to the soup.

METHOD  Chop the vegetables and fry gently in butter without browning for 4 or 5 minutes.  Put in a saucepan and add water (for two people, two mugfuls).  Boil for about 25 minutes then process to a smooth texture in a blender or with a blending stick.  Stir in some cream or crème fraîche to taste and adjust seasoning.  Some vegetable stock powder will give a slightly deeper flavour.

In addition to its gastronomic and conservation interest, Babington's leek makes an interesting ornamental plant.  Its flower heads rise on slender stalks to  about 2 metres in height and carry a globular head mainly of bulbils with a few flowers scattered about on longer stalks.  As they extend these tall stems look like long-necked birds and the developing heads move during the course of the day to different orientations as though searching for something.  For their size these stalks are remarkably strong and never seem to get broken by summer winds. 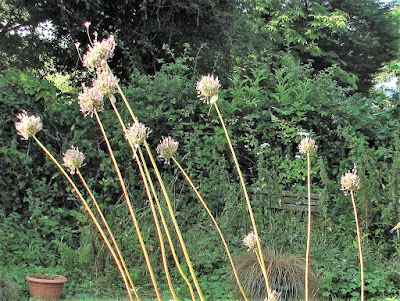 The flower heads are composed of tightly packed bulbils each of which will produce a new plant. 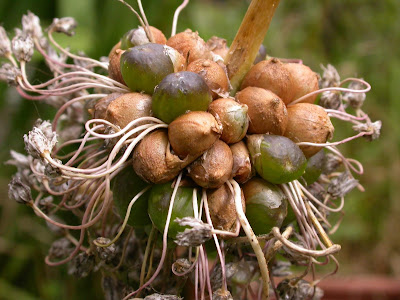 Babington's leek is a winter green plant with leaves that appear above ground in December. 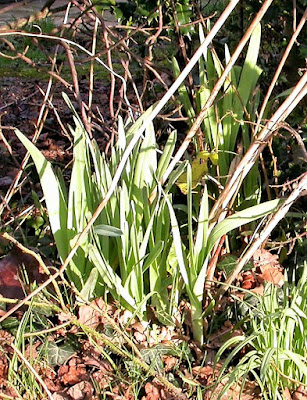 Posted by Patrick Roper at 7:03 pm No comments:

Marsh spurge (Euphorbia palustris) is one of the most fascinating and beautiful plants in our garden.  As I write on a sunny 3rd September, the third day of meteorological autumn, I can see a couple of the plants in a large black cubical box.

This spurge always seems to be doing something, often several things at the same time. The largest plant in the box is about one and a half metres tall.  It has small but complicated yellowish flowers (technically 'cyathia') on many of the upper parts of each cyme and the flowers are often accompanied by green and ripe brown seed pods. 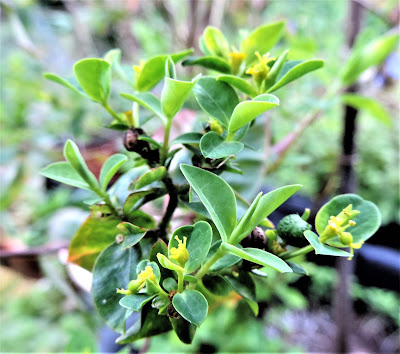 Lower down the dusty red stems new shoots of green leaves with a central white stripe are appearing and I imagine these will be heading towards flowering next spring when the plant puts on its greatest show with acid yellow bracts around the flowers.  (In fact many of these new shoots were flowering by 21 September, so the plant was flowring on both the older stems and the ones that had developed after midsummer).

Throughout the summer many of these early bracts and older leaves fade to complex and subtle shades of old rose, faded orange and tired green..  Although the name indicates that it is a marshland plant, it grows perfectly well here in ordinary and often very dry soil.  I do have one plant that I keep very wet.  It grows well and in due course I will be able to see how it does compared withe others.  If plants get very dry they die back to woody rootstocks from which shoots appear very quickly if water is restored.

In mid-September the lower leaves turn colour on my plants that are growing in wet conditions. 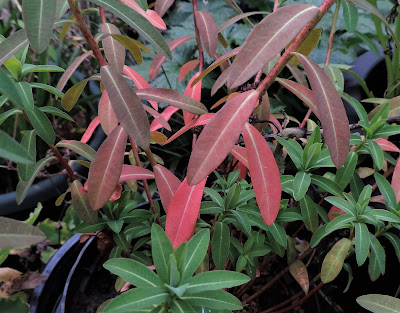 According to the Biological Flora of Central Europe it is an endangered river corridor plant whose natural habitats are being destroyed.  However, plants are very widely available in the nursery trade in the UK 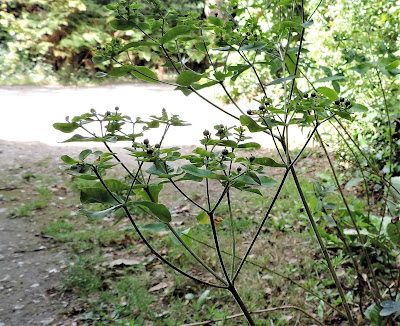 It has been described as a hemicryptophyte, a perennial having its overwintering buds at the soil surface.

The plant is not a British native, though it seeds itself readily and has been recorded from various places in the UK.  The only 'wild' record I can find here in East Sussex is on a verge at Gray Wood (TQ5316) east of East Hoathly.  It is widely distributed across central and eastern Europe and western Asia.  There is a cultivar of E. palustris called 'Walenburg's Glorie' which apparently turns proper red in autumn and is described as 'dazzling' by the Royal Horticultural Society.

There is also a cultivar called 'Zauberflote' (Magic Flute) which is assigned both to E. palustris and Balkan spurge, Euphorbia oblongata, and I wonder if the two species have been conflated.  Monty Don, well-known for his TV gardening programmes, describes 'Zauberflote' as smaller than normal E. palustris and 'fabulous'. On her web site horticulturalist Sarah Raven says of E. oblongata (which she calls 'eggleaf spurge') 'the all round best-looking, longest-flowering foliage plant you can find anywhere in the world. It forms the base of 95% of my floral arrangements, and lines most of the beds in my garden at Perch Hill.  You never tire of their brilliant acid-green flowers and bold, strong shapes. It is really a short-lived perennial, but it flowers best in its first year, so we treat it as a hardy annual.  One nursery says E. oblongata is almost identical to Euphorbia coralloides which does not seem to be the case, but I think the relationship between these various spurge species needs a more critical look. 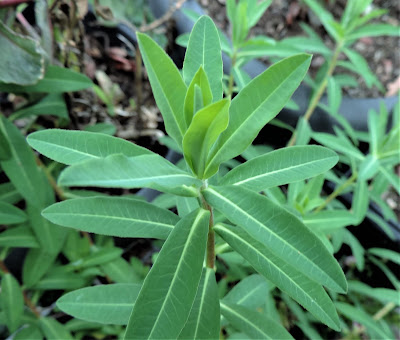 On 21 September 2018 some seedlings of Euphorbia oblongata from the Sarah Raven Nursery came up in a square of nine small pots.  They were shiny little humps of reddish chestnut brown and the seeds had been recommended for autumn sowing.  The following day I went to see how they were getting on and every one had been pulled up.  Those I found scattered around the area appeared to have had the cotyledons 'bitten' off, but otherwise remained intact.  There were many other seedlings of different plants in this area and none appeared to have been touched.  Also various spurges sow themselves liberally in our garden and do not appear to suffer these depredations.

It is difficult to imagine what might have attacked the spurges and why?  I suspect a bird, but spurges contain toxic juices and would not, I imagine be very attractive.  My daughter suggested that their shining brown colour might have simply interested a bird or, perhaps, been mistaken for a small worm or similar, but that does not really account for the disappearance of the cotyledons.  I have planted the sad remains of one or two seedlings back in a potlet and placed the whole in a mini greenhouse for protection and in the hope that there are still some seeds to germinate.  I have also tried to germinate five seeds on damp paper in a small polythene container in a dark drawer and saved a few seeds for spring sowing.

Email: patrick@prassociates.co.uk
Posted by Patrick Roper at 7:59 pm No comments:

More on the drought

There has been scarcely any rain since the beginning of May and this has affected the more open parts of M3.  The rush plant on the left of the picture has collapsed but many plants survive. 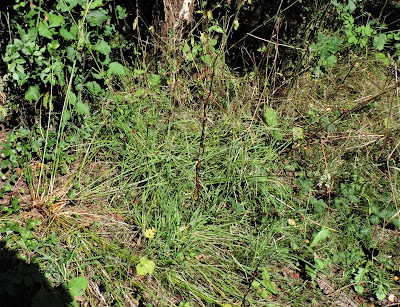 Today I noticed that the large birch tree was struggling.  The branches are hanging much lower than usual and the leaves look dry and dull.  In the picture below the sallow has the bright green leaves and appears to be doing much better than the birch.  I would have expected the reverse to be the case. 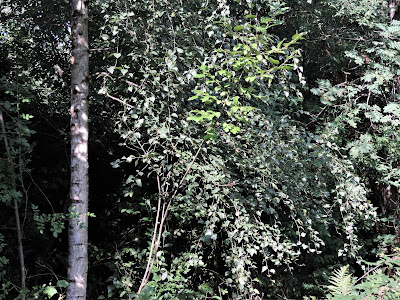 Posted by Patrick Roper at 6:54 pm No comments: