Galls in the grass

Strolling yesterday on the fringes of St. Leonard's-on-Sea I noticed some of the fading grasses dangling through a wire mesh fence were swollen and distorted at the tips where the flowering spike might have been. 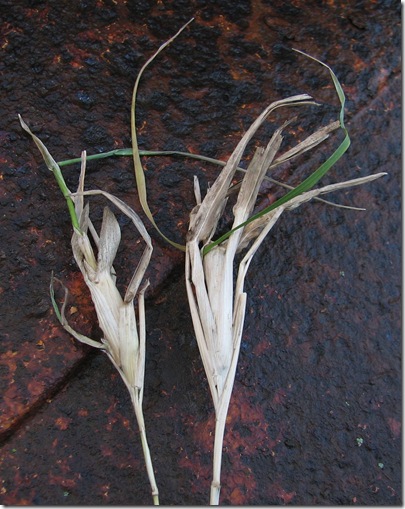 Further investigation showed that the grass was common couch grass (Elytrigia repens) and that the galls were caused by the small Eurytomid wasp Tetramesa hyalipennis.  The books and papers on galls indicate that this is a widespread and common species but there are no records on the Sussex Biodiversity Record Centre database and the National Biodiversity Network has records only from Merseyside and Northern Scotland.  It has also been recorded from Cornwall and I am sure it has simply been overlooked elsewhere.

Now is the time to get out and see if you can find any.

I have brought those in the picture home to see what hatches out.  It will not necessarily be T. hyalipennis as various parasites and squatters have been recorded from these galls and the child or children of the original gall causer may have been consumed in its prime.

Posted by Patrick Roper at 8:30 pm No comments: