The photo below shows many of the features in the Second Meadow that are mention in this post.  The stone row  just to the left of centre is Cynthia's Ridge. Travelling clockwise the flat area to the right is the Dust Bowl. The dark circle at 3 o'clock is Second Meadow Pond.  Just below this is the singled Eastern Dandelion just above the ragwort plant both growing in what I call Conservation Lawn.  At about 7 o'clock there is the cardboard Amazon square and at about 8 the western dandelion between two non-interference grass tufts.  The grey brown area to the left of these is where the woodchip from the entrance path encroaches.  At about 11 o'clock past the fern and the irises the black bryony climbs up into the darkness and already has a few yellow autumnal leaves. 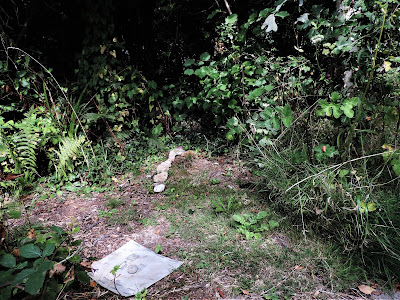 19 July 2019                Quite cool with rain approaching: its first intrusions could be felt in the wind.  A muscid and an ichneumon sat each on its own rock in Cynthia’s Ridge, presumably enjoying the stored warmth.  There was also a fragment of snail shell on one of the rocks indicating a thrush had been in action.  Second Meadow Pond was half empty again.  Many of the sorrel seedlings are marked with red to a greater or lesser degree.

20 July 2019                Heavy overnight rain has wetted the Dust Bowl and given the seedlings a better chance of survival.  There were two springtails on thePost settings pond and a cream spot ladybird, Calvia quattuordecimguttata, on a hogweed leaf.  One living feeler of ivy has reached Second Meadow Pond. 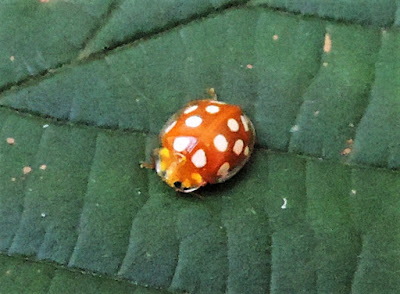 21 July 2019                Warm again – good growing weather.  Three Rhagonycha fulva, red soldier beetles, and a male social wasp on hogweed flowers.  A red blood worm tumbling through the water in Second Meadow Pond plus a dead burying beetle (Nicrophorus sp.) in the grass. I wonder what it had been burying.

22 July 2019                There are green aphids on some hogweed stems and a potter wasp on the flowers.  I am letting a few grass clumps develop naturally in the Second Meadow in the hopes that they will grow into an interesting feature.  The first harvestman of the year appeared in the vegetation north of Troy Track.

26 July 2019                Thunderstorms overnight and heavy rain that refreshed Emthree after the heat.  Politics has been as lively as the weather with Boris Johnson becoming Prime Minister and appointing what looks like a very right-wing cabinet.

29 July 2019                Windy and rather cool.  The first knapweed is in flower.  There was a visit from a meadow brown butterfly.  The grass tufts in Second Meadow are now starting to differentiate but I do not think they will anthesise this year.

30 July 2019                We have moved my little gardening seat back further into the Brambly Hedge area so I can get more into focus with my close-focus binoculars (now essential equipment).  There are many solitary wasps among the hogweed flower visitors and a scorpion fly put in an appearance.

1 August 2019             Light rain today. A large black beetle in the pond.  Creeping buttercup in flower.  I surveyed the area with my old Zeiss monocular which allows very close focus.  I selected a few more  plants of grass to be given a kind of zen landscape treatment.

2 August 2019             I have three square metres now: the original, what I call ‘The Waste’ to the south of it, and the Second Meadow to the west of these.  There are many insects jostling on the hogweed flowers and male and female Gasteruption seem more abundant than usual. I noted a marmalade fly, Episyrphus balteatus drinking from Second Meadow Pond.  The eastern dandelion leaves are being attacked by the rust fungus Puccinia hieracii but so far it does not look too debilitating. 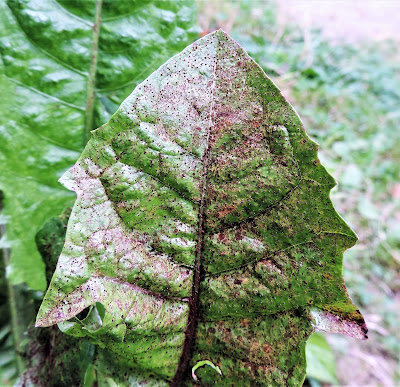 3 August 2019             The seed pods of the gladdon irises in Medlar Wood hang like green hand grenades.  There was a visit from a speckled wood butterfly.  An ivy shoot has started to climb the trunk of the birch up a rough patch of bark. 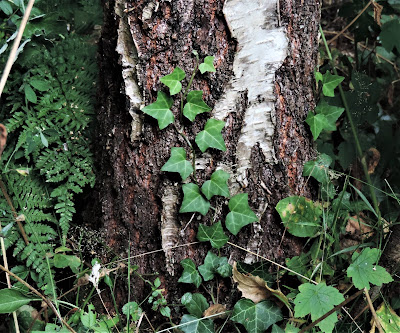 A small hedge woundwort plant on the western edge of the Second Meadow has had most of its leaves eaten during the night.

4 August 2019             This would have been (and was) our 60th wedding anniversary.  There was an orange rowan berry like a punctuation mark on the Conservation Lawn in the Second Meadow.  Meadow Pond was only half full.  The black bryony up its iron pole is quite splendid: a bright green column of leaves hiding still green berries.  Some of the leaves have dark brown blotches, probably caused by the fungus Cercospora scandens.

5 August 2019             Honeybees quite frequent visitors to knapweed flowers.  A large white butterfly made a visit.  The spindle suckers are heavily infested on their lower leavers by the yellow spots caused by the scale insect Unaspis euonymi.  There has been a small amount of rain and the eastern dandelion has, perhaps as a consequence, cocked up its leaves at an angle of about 45°.

6 Aug 2019                 Cool and showery but much action on the American willow-herb, Epilobium ciliatum with some aphids attended by a wrinkled ant.  The aphid is, I suspect, Macrosiphum tinctum.  There are a few yellow spots on some of the hornbeam cordon leaves, maybe a fungus – I will have to wait and see if they develop.

7 August 2019             The western and eastern dandelions in the Second Meadow are quite different in character.  The eastern has more shiny leaves that often stand up at 45°, whereas the western one has nearly matt leaves of slightly paler green that lie flat.  The eastern also has markedly red streaks on the midribs of the leaves, but there is little red in the case of the western one.  Cooler and showery.

8 August 2019             Still cool with mist and rain on the way.  I weeded out sorrel seedlings from the Dust Bowl and cleared round the self-heal plant near my seat.  Found another small ragwort plant near here.  This really is gardening with wildlife – but why not?  Co-operating with nature.

9 August 2019             Just before 3pm and earthworm emerged on Troy Track into the full sunshine of a warm afternoon.  It did not seem to like it much and hid most of its body under a low grass tussock.  Overnight there had been heavy rain which might have flooded the worm holes or otherwise tempted it out.  Shortly afterwards a young grass snake poked its head out, tongue flickering, from the bottom of Brambly Hedge and after it had tasted the air slithered back again.

10 Aug 2019               A summer gale with winds of around 50mph.  More sound than fury.  The tutsan berries are turning from orange-red to black.  With the continuing wet there are many small seedlings appearing in the Dust Bowl.

11 August 2019           The tallest stem of the American willow-herb has decided to lay flat on the ground but still looks healthy.  Troy Track is also developing a surprisingly g=rich flora despite regular trampling.  Calm after yesterday’s high winds but much leaf and twiggy litter.  The dead ash sapling must have broken at the base and is leaning westwards with its burden of small-flowered sweetbriar in the upper branches.  There was a black and scarlet Necrophorus burying beetle drowned in Second Meadow Pond (I would not have thought it had much to bury) and a 4th instar green shield bug on one of the small ashes.

12 August 2019           Frequent overnight showers.  Ground quite wet.  Many hogweed flowers but little else.  None of the vast quantity of birch seeds on the ground seems to have germinated.

13 August 2019           Grass clipping across Conservation Lawn today.  I thought about taking up drawing and painting but decided the next day I would not be good enough.  The eastern dandelion I have named ‘Shuttlecock’ and the western one ‘Green Star’, this latter has the shorter leaves of the two and today a perfect white fluff feather was caught under one of the leaves.

15 August 2019           The Rosa sp. hip has turned greenish orange as it begins to ripen.  There are also some glandular hairs on the hip pedicel.  Sammy saw a grass snake in the garden to the west of Emthree and also reported a frog from the nearby tortoise pen potato patch.  The two dandelions continue to differ: the easterly is losing some of its leaves to the rust fungus (Puccinia hieracii): the western specimen has none of the fungal speckles and its leaves still lie quite flat on the ground.  Very mysterious the ways of dandelions.

16 August 2019           Incoming rain from the west.  The figwort in M3 is flowering again and another ’Lammas’ shoot has appeared on the cordon oak.  This particular oak branchlet has extended three times so far this season.

17 August 2019           At Emthree I am fishing for thoughts and like the sun on my back.  The eastern dandelion leaves are standing up even more proudly now, perhaps because of the wet weather.  Another difference from the western plant is that the eastern has slightly undulating lead surfaces whereas in the western they are completely flat.  The plant with shuttlecock leaves will direct rainwater to the centre of the crown more efficiently than the plants whose leaves lie flat.  There was a dead worm beside one if the self-heal plants.

18 August 2019           Emthree is getting more like an arboretum every year.  The hornbeam is still growing strongly and is over 2 metres tall (it will be cut back to 1 metre in autumn).  One of the hazels has extended nearly as much.  The rose hip has lost all but one of its sepals and a green shield bug is still about.  One of the hogweed  umbels attracted a congregation of solitary wasps.

19 August 2019           A small female sawfly, black with a yellow body, busily explored every leaf of the easterly dandelion.  Black muscid flies pursued their various dispositions on the stones of Cynthia’s Ridge – an ever-changing drill.  I caught glimpses of something blue beside the red stone.  It proved to be a chewed-up petal of some nearby flower.

20 August 2019           Flowers out: hogweed, knapweed, self-heal, Epilobium montanum, E. ciliatum, herb robert.  The rust fungus continues to pull down the easterly dandelion.  There was a small shining copper orange beetle on a knapweed leaf.  A flesh fly drank from Second Meadow Pond. Fifteen years ago the area was much busier and on 20 August 2004 I spoke of the grasshopper and ground hoppers that were abundant that summer.  There are none so far this year.

21 August 2019           A scarce snout-faced hoverfly Rhingia rostrata and a bumble bee hoverfly Volucella bombylans on knapweed flower (and another on 22nd) and a black spider hunting wasp Anoplius nigerrimus resting (they are usually in perpetual motion) on a stone on Cynthia’s Ridge.  Warm and summery again.

I have started a new experiment by placing a rectangle of cardboard 35 x 27cm (used to send me a book by Amazon) on the ground on the south west edge of the Second Meadow and where I can easily see it from my seat.  The idea is to study what happens to it.  Today a kite-tailed robber fly Machimus atricapillus rested for a while on the rectangle – a new record for Emthree.  I also noted some bright blue glittery thing in the grass nearby and discovered it was part of the thorax and body shell of, I think, some kind of fly, like an empty, blue crab shell on a much smaller scale..  I reflected, as I often have, on the large quantity of dead insects that must rain down to the ground every day to be hoovered up by flesh eating scavengers – birds, shrews, spiders and other invertebrates.

22 August 2019           Warm wind from the south-east.  There are many butterfly species about in the wider garden.  Emthree was visited by an exploring-for-hibernation-place peacock and there was a ragged large white on Brambly Hedge.  The first Lammas shoots on the oak cordon have been quite severely damaged by the  powdery mildew Erysiphe alphitoides.
Posted by Patrick Roper at 5:36 pm No comments: