Effects of the rain?

Many of the wild plants in our beautifully tidy garden have grown much taller than usual, perhaps as a result of the very wet last three and a half months. 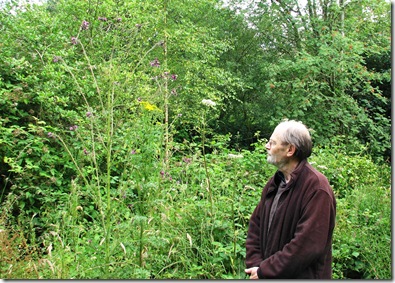 I am about 1.8 metres tall and the marsh thistles, ragwort and hogweed behind and to the left of me are as tall or taller.

Behind me, in the distance, the berries on the rowan tree are starting to turn red.  I always take this as a sign that summer is moving into autumn, but at least it is happening at the usual time this year.

The wool carder bees (Anthidium manicatum) are on the wing again and, as usual, seem particularly fond of my houseleeks.  We have provided them with plenty of woolly leaved plants for the females to ;card' and line their nests. 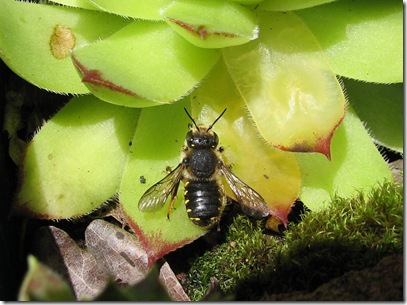 Posted by Patrick Roper at 11:17 pm No comments: 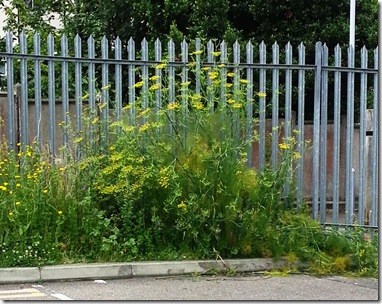 Coming out of Hastings station car park today I caught sight of a fine stand of fennel (Foeniculum vulgare) and stopped to take a snap out of the car window.

The flowers are very attractive to a wide range of insects (grow them with one of the taller varieties of mint in a herb garden and you will have a wonderful insect party on sunny days when both are in flower).

The leaves and seeds can, of course, be used in a wide range of recipes and herbal teas.

Fennel is not a native British plant but hails from the Mediterranean.  However, it has been happily established here probably since Roman times.

I have read that it inhibits the growth of other plants, but there is clearly a large number of perfectly healthy plants growing next to it here, so I take it that it does not normally, if ever, have this quality.

It seems a fitting sort of plant to have seen on the day the Olympic torch arrives in Hastings.  A stately species originating from the Mediterranean and mixing well with other plants.  It even seems to be approaching the fence as a kind of high jump.  Apropos of the Olympics, our eight year old granddaughter on being told that the Olympic flame was transported by coach from place to place, was concerned that the vehicle might go on fire.  A blazing bus would certainly be a newsworthy story.

Posted by Patrick Roper at 5:24 pm No comments:

Standing idly in the garden in a rare sunny moment, I noticed a bank of flowering hedge woundwort (Stachys sylvatica) was attracting many hive and bumble bees to its flowers. 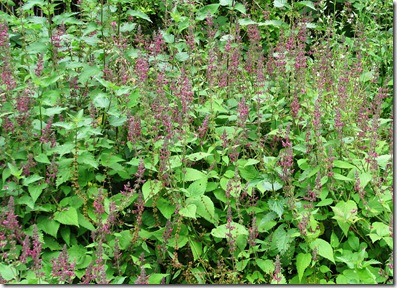 The plant is common and widespread in our area and elsewhere in Britain and has a solid reputation as a bee plant.

It also has, or had, medicinal virtues.  Nicholas Culpeper, the renowned 17th C herbalist wrote that this plant "stamped with vinegar and applied in manner of a pultis, taketh away wens and hard swellings, and inflammation of the kernels under the eares and jawes."

Thomas Green (1832) in The Universal Herbal says "Toads are thought to be fond of living under its shade" which, coupled with its attraction to bees and its curative properties, gives me a good excuse not to cut the plant down.  Even more so as the Ecological Flora of the British Isles lists 56 insect species associated with the plant, including 5 that are monophagous as well as (snap) 56 fungi, mostly rusts, moulds and the like.

If my arithmetic is right that is 112 species but this does not include visitors to the flowers.  In contrast, Anne Pratt in her book Wild Flowers (1860) writes "no animal is known to eat it, save the snail" but I take it that (apart from molluscs) she was referring to mammals. 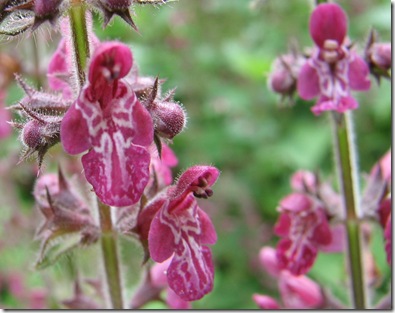 Posted by Patrick Roper at 5:34 pm No comments: