Never corny, the flowering of our bluebell woods is always spellbinding.  Despite the erratic weather in the 2015/16 winter the plants seem to be doing just as well as ever.  This is from Killingan Wood in Sedlescombe. 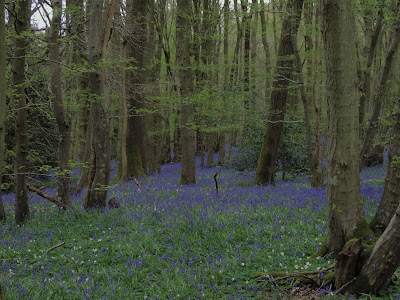 Butterflies continue to appear.  Today I had a chat with this splendid comma (below) resting head down and wings spread to catch the sun's warmth on dead bramble stalks in a blackthorn thicket.  Although so familiar, I ruminated on the jagged edges to the wings which hardly seem designed to enable the insect to fly better.  If they are supposed to disguise the insect by making it seem like a fallen leaf then come on Evolution pull your socks up.  The butterfly is more cryptic if the wings are closed allowing only the dark underside to show, but then why is the upper side not dark also? 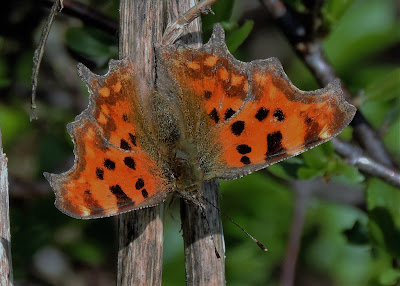 Posted by Patrick Roper at 2:59 pm No comments: 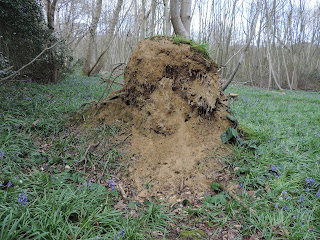 In ancient Churchland Wood just at the end of our garden there is a root plate on  a sweet chestnut that was toppled in the 1987 great storm. 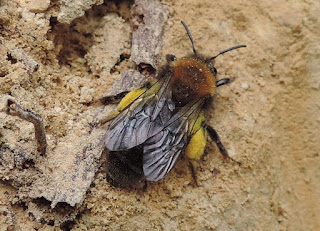 Microhabitats like this can be interesting and are important to species of plants and animals that need the conditions they provide. I have often looked at it for wildlife and this year was pleased to find that there were many females of Clarke's mining bee, Andrena clarkella, digging out nest holes, mostly near the top of the plate, as comfortable, well-stocked quarters for their progeny.  These bees are fond of pollen from sallow flowers and will visit dandelions and other species for nectar.  We have several sallows in the garden and, combined with the root plate, a breeding opportunity is created that is becoming increasingly scarce.  I worry though that in 'well-managed' woodland (now often thought of as a essential conservation requirement), root plates would be levelled (might get in the way of forestry machines) and sallows removed as tree species of little worth.

Andrena clarkella is widespread in the south of England.
Posted by Patrick Roper at 10:28 pm No comments:

Late last spring I found some tiny plants among short grass on an earth bank running down from the front garden of a house in a modern estate on the edge of Sedlescombe village.  It was a very dry, sunbaked spot and the plants were brown and dry too, but had clearly been flowering. 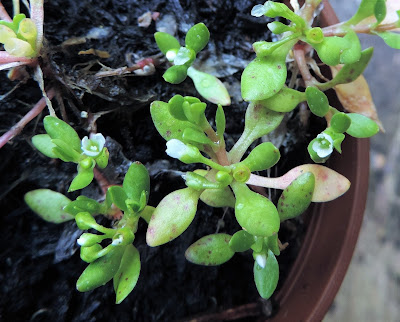 I brought a few small pieces home and potted them up, though I had little hope that they would grow. However, some tiny seedlings appeared in the autumn and developed gradually, coming into flower in late March.  They appear to be blinks, Montia fontana, probably the subspecies chondrospermia which grows in drier places, but it is not an entirely accurate fit and I will have to wait for seeds as their outer casing is diagnostic for the subspecies.  There are also various foreign species of Montia and I will have to bear that in mind as members of the genus appear to travel well.

M. fontana is a wintergreen plant and, with its rather larger sister subspecies (which grow in wet places) has been used as a salad, though one would have to pick a lot to get any satisfaction.  In some places it is known as 'annual water miner's lettuce'.
Posted by Patrick Roper at 7:38 pm No comments: