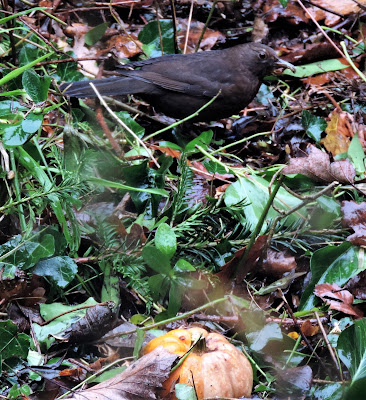 Our granddaughter has recently cleared the area outside our kitchen window between the path to the backdoor and the hedge as part of our intermittent attempts to manage it as a mini nature reserve.  A couple of days ago we put a small slightly rotten orange pumpkin (sold as a munchkin) in the centre of the area.  I bought in October as a small gesture towards Halloween and wanted to watch what would happen to it as it decomposed.  Yesterday the female blackbird at the top of the picture put in an appearance and was flicking leaves over in search of food.  Among other things she found fallen berries from the nearby rock whitebeam tree (Sorbus rupicola).  Her activities started to bury the munchkin (which she did not touch) with a layer of leaves and I reflected that birds must often help objects laying on the surface slowly to get covered up and buried. 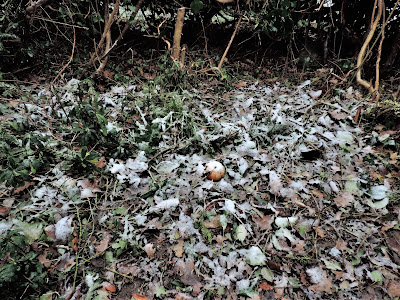 Today we had our first snow of the winter accompanied by much hysteria on TV.  We caught a snow belt that moved in from northern France (closing the port of Calais) but we were right on the edge and it all melted quite quickly.  However, I think it is one of the coldest spell we have had in December for a long time.  The photo is a wider shot of the munchkin area much patronised by Mrs. Blackbird and, today, her mate.

Posted by Patrick Roper at 4:43 pm