In Churchland Wood (TQ782189) I found a circular patch of green liverwort two metres up on the smooth trunk of a sweet chestnut.  After an exchange of emails with my old friend Howard Matcham it was identified as dilated scalewort (Frullania dilatata), a species which I am more familiar with in its brownish purple form.  It is quite common in our area. 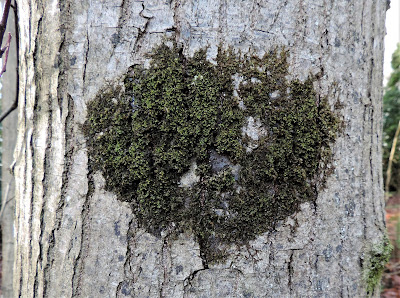 I brought a small piece home with me and, to my surprise, discovered a tiny shieldbug nymph nestling among the fronds.  It is an overwintering forest bug (Pentatoma rufipes) - one of the few species that overwinters here as a nymph - and quite how it normally gets through the winter has been a subject of some speculation. 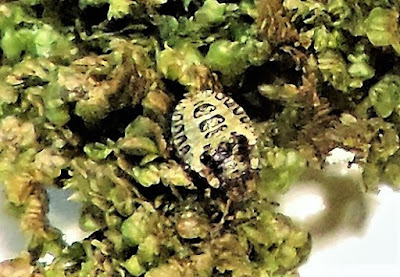 Roger Hawkins in his book Shieldbugs of Surrey. (Surrey Wildlife Trust, 2003) says "The Forest Bug is unusual in that it passes the winter as a small nymph, high up on the bark of forest trees."  There follows a discussion of the various things these nymphs might feed on and materials such as tree sap, small invertebrates and honeydew are cited.  Southwood & Leston in their Land and Water Bugs of the British Isles say "it is not known if the first instar larvae feed.  The second instar larvae feed, but the nature of their food is not understood."

It seems to me that, among other things, they might well be sucking the contents of the leafy lobes of some of these tree hugging liverworts, especially as they are well-camouflaged in such situations.  The liverwort pads are also not well-placed for insectivorous birds to explore and contain a variety of small invertebrates such as springtails and mites that would vary the bug nymph's diet.

As another twist I learnt that Frullania dilatata and F. tamarisci cause a dermatitis known as 'woodcutter's eczema' and it occurred to me that the bug nymphs, if they are sucking the sap, may be building up some sort of chemical defence against predators.