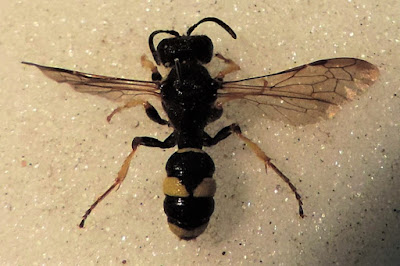 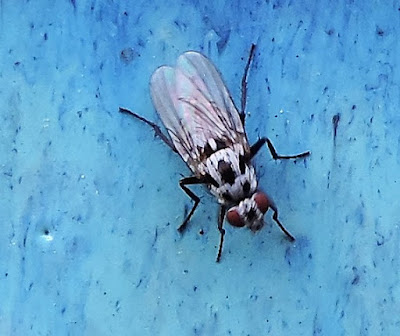 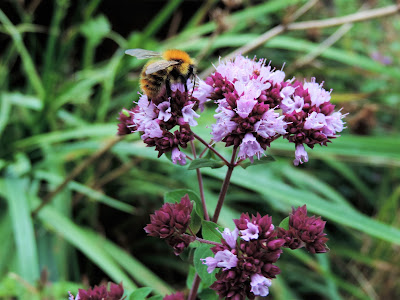 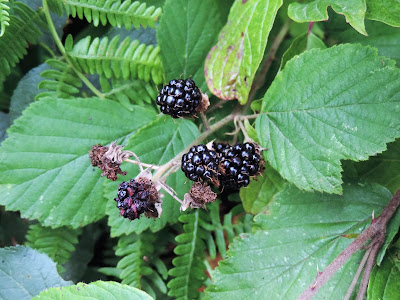 Posted by Patrick Roper at 10:42 pm No comments:

I recently found a rather strange and distinctive fly in our garden that turned out  to be Stomorhina lunata a member of the Calliphoridae, the bluebottle family, though it does not look anything like a bluebottle and has been compared to some of the hoverflies. 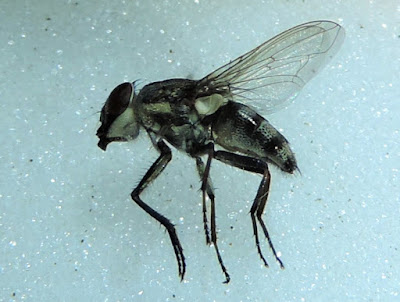 (There are many better pictures on line).

Widespread in England, especially the south, it is said to be scarce, though Steven Falk has found it in many locations on the South Downs in recent years.  Most accounts say that it is probably a migrant from mainland Europe or even further afield.

In Africa the species is known to breed in the egg cases of locusts and some suggest that it turns up in Britain when large swarms of locusts are on the march in Africa.  This hypothesis has metamorphosed into the idea that since the early stages have only ever been found in locust egg cases, the adults must be migrants in the cooler parts of Europe - a good example of the absence of evidence being taken as the evidence of absence (in this case of the fly breeding in Europe).

In this Internet age, the Food and Agriculture Organisation of the United Nations monitors locust swarms and there does not appear to have been anything exceptional, or close to Europe, in 2015 or 2016 (http://www.fao.org/ag/locusts/en/info/info/index.html).  I therefore suggest that Stomorhina lunata can breed in places other than locust egg cases, though maybe in mainland Europe rather than the UK, so our records could still be of migrants.

Posted by Patrick Roper at 1:20 pm No comments: 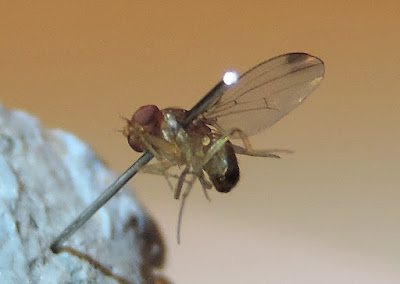 A small fruit fly (Diptera: Drosophilidae), Drosophila suzukii, was found by the author of this blog in his garden in Sedlescombe, East Sussex (OS grid ref. TQ782188) on 10 September 2016.  It was the first Sussex record submitted to the Sussex Biodiversity Record Centre of this species which is spreading globally from its original home in the Far East.  It was first recorded in the UK in 2012.

In general appearance it closely resembles the Drosophila species associated with overripe fruit, vinegar and wine bottles but is distinctive on account of the dark area at the tip of the wings in the male (hence its English name -.  this name is often abbreviated to SWD).

The female lays her eggs within a wide range of ripening fruit and the larvae then develop inside the fruit.  Because of this it is regarded as a major pest, or potential pest, of soft and stone fruit both on a commercial scale and in gardens.  It can also attack blackberries and other wild fruits so it may have an effect on the wider countryside.

Much research into this newly arrived species is being done by the Agriculture and Horticulture Development Board (AHDB) and East Malling Research (EMR). Details of the fly and its habits are summarised here: http://horticulture.ahdb.org.uk/swd-identifying-pest  One of the problems of identification is that it is not featured in any of the European pre-2012 literature dealing with the Drosophilidae.  The females in particular are likely to be overlooked or misidentified because they do not have spotted wings.
Scott Raffle of AHDB currently works as the industry co-ordinator for much of the SWD work that AHDB fund and says (September 2016) “the pest has been present in the South of England since 2012. It can be found everywhere in the South irrespective of whether the location is near to commercial fruit growing farms.”   Accounts of the spread of the species have been published in Dipterists Digest, but few records seem to have got through to the National Biodiversity Network (NBN) and other national and regional wildlife recording agencies.

This new species may not be very tolerant of winter cold, so its survival here could be of limited duration.  Records are however important in showing how far north it might have reached thus indicating areas that are (so far) free of the pest.