Today I spotted several parasol mushrooms (Macrolepiota procera) on the verge of the lane to the village.  They often appear here and have formed quite a large colony over the years.  Mid-November seems very much later that usual though. 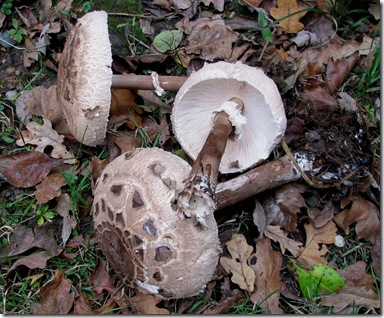 I brought three youngish ones home and we had some excellent parasol fritters.  If fried, or used in other recipes for mushrooms, parasols tend to grow rather soft and watery, so fritters is a good way of using them - a crisp, slightly spicy outside with a soft, fungus-fragrant interior.  The sort of food that is almost impossible for a restaurant due to the fragility of the parasols and the irregularity of their appearance.

I just remove the stalk and cup the cap into eight wedges.  These are then dredged with plain flour, dipped in batter and deep fried in fat somewhat less hot fat than for potato chips.  In the picture of the fritters below, I am amused by the little mushroom-like protuberances made by batter trying to escape. 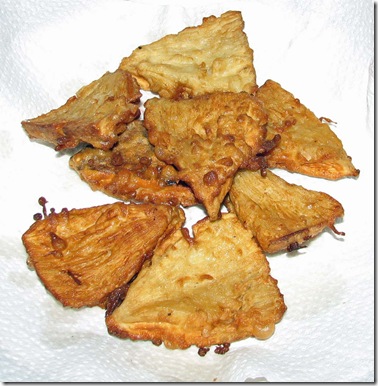 Some care has to be taken over consuming parasol mushrooms as they have several decidedly poisonous lookalikes, though this is more of a problem in mainland Europe and North America than in the UK.  Also some people may have an allergic reaction, so try a very small amount first if you are tempted.

Posted by Patrick Roper at 11:59 pm No comments:

I found a young elder tree (Sambucus nigra) today growing in the fork of the trunk of the wild service tree (Sorbus torminalis) just outside our house. 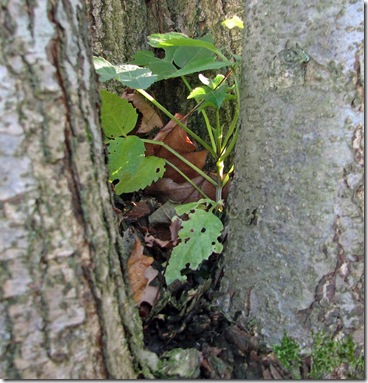 The elder has found sufficient nourishment and water trapped in the trifurcation of the trunk to grow well in it its first season and it may persist for some years.

The fork in the wild service is at chest height and came into being when the single stem of the young tree (which I grew from seed sown about 1974) was toppled by a bright blue weevil called Rhynchites caerulea.  These cut right round the young green shoot which topples over and usually falls to the ground.  The adult weevils lay their eggs in these fallen shoots which subsequently feed their larvae.

The following year two or three stems arise from the damaged maiden in the absence of a leading bud and this creates the fork.  As leaves and water, not to mention baby elders, gather in the fork it makes a weak point from which decay can easily get into the centre of the trunk and ultimately bring about the death of the tree.

So it goes (as Kurt Vonnegut would say).

Posted by Patrick Roper at 9:37 pm No comments:

The purchase of most of Brede High Woods lying between Sedlescombe and Brede in East Sussex was completed by the Woodland Trust last December and there continues to be full public access to these wonderful woodlands and other habitats. 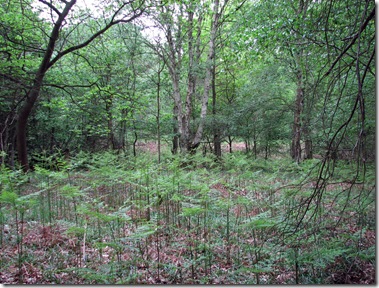 I live within easy walking distance of the woods and have been exploring them since the late 1950s, so I am very pleased that they have been secured for everyone to enjoy in perpetuity. As well as ancient woodland, the area has unimproved grassland, heath, sphagnum bog and a variety of streams and ponds, all of which goes to ensure a rich and important biodiversity.

I have worked closely with the Trust over the last couple of years and have now started a Brede High Woods weblog to alert as many people as possible to the delights of the place.

Posted by Patrick Roper at 11:36 pm No comments: