I was asked recently by a friend if there was anything he could do about the rats that had turned up on the ground under his bird table. 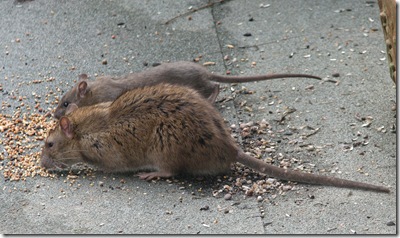 Cats, terriers, traps, guns, poison, ultrasonic devices- there a plenty of options, most of them with drawbacks. And, of course, he could stop feeding the birds.

The rodents there are brown rats (Rattus norvegicus) which, despite the specific name, did not reach Britain from Norway. They arrived here and elsewhere in Europe, from their native home in the Far East, probably in the early 18th century and have spread to most of the world apart from the Arctic and Antarctic and a few islands.

In Britain some reckon there are 81 million of them, more than the human population and many, of course, live in urban areas. They have a bad reputation because they steal our food (as well as that of the birds), forage in smelly places and can transmit various diseases, especially when they live in sewers. They do, however, have a plus side. Some people think the decline of bubonic plague was due to the arrival of brown rats since, like us, they can apparently catch plague but not transmit it. Transmission was normally accomplished by fleas on the black rat and other rodents and the displacement of the black rat (Rattus rattus) by the brown rat has been equated with a decline in the plague (aka black death).

Rats have also contributed much to medicine through their role as laboratory animals and in many countries they are popular pets.

The disgust felt for these animals by many people seems to be a culturally derived habit and not one like a fear of things that can be genuinely harmful like venomous snakes. Their name has also been used as a widespread insult -"You dirty rat" etc. Maybe they are too much like us. Many people do have a sort of general fear of wild animals, even mice and spiders, but the rat is in a class of its own.

Robert Browning in the Pied Piper of Hamelin didn't do much for their image:

They fought the dogs and killed the cats,
And bit the babies in the cradles,
And ate the cheeses out of the vats,
And licked the soup from the cooks' own ladles,
Split open the kegs of salted sprats,
Made nests inside men's Sunday hats

But the puppet Roland Rat, created by David Claridge, has had a spectacular career as a TV character since the 1980s and his markedly ratty personality and home in a ratcave under Kings Cross station seems to make him more rather than less popular. It is us that are peculiar creatures rather than rats. Still, we both go in for bruxing (the sound made by grinding one's teeth), a new addition to my vocabulary.

Posted by Patrick Roper at 7:41 pm No comments:

For 12 days the night time temperature has fallen below freezing with over a week of unbroken snow cover. In the garden on several days it has reached -6 degrees C, and once -8, unusually cold for our area. It was snowing again this morning, but a thaw is forecast so hopefully it will feel a little warmer next week.

Yesterday evening the temperature fell very rapidly as the sun went down. There was an Irish tradition of a small ‘western room’ in the house where mementoes of members of the family that had passed on were kept so that one was reminded of them as one faced the setting sun, the direction the dead followed on their journey to the Otherworld.

The coldness and stillness of the subzero winter world echoed this mood as I watched the sun set over the churchyard across the valley from our garden. However, the dark 'sunspot' of a rook's nest silhouetted against our life giving star reminded me that spring is not far away. 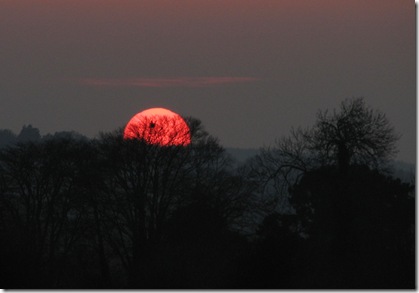 Posted by Patrick Roper at 11:54 am No comments: