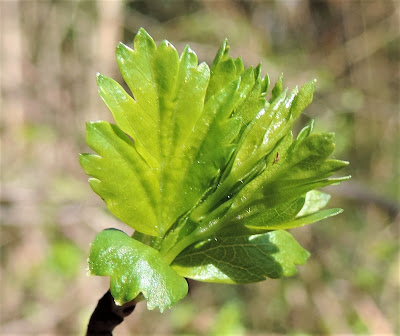 Hawthorn leaves (Crataegus monogyna) are now sprouting liberally in the garden.  Every year I think they are earlier than ever, but this may just be a delusion as I do not keep any proper phenological records.  To be of any value I think the first record of anything in a particular year should be made under the same conditions as in previous years.  One should return to the same hawthorn bush and be sure that local conditions round about it have not changed.  Around our lane there is a 50 metre stretch of hawthorns that always seems to sprout before any others.  I suspect this is because they are an early leafing clone that was bought in and planted, but roadside plants often behave rather differently from those elsewhere.  The road and its traffic perhaps creates a microclimate or possibly more carbon dioxide and other exhaust gases accelerate growth.

As a child my friends and I used to eat young hawthorn sprouts and called them 'bread and cheese'. This seems to be a very widespread habit in the British Isles and the shoots are quite palatable, if not very exciting.  How they came to be called 'bread and cheese' I have been unable to discover - they are certainly nothing like bread and cheese either in appearance, in shape, or in colour.  A probable explanation is that they were eaten by the very hungry as a replacement for bread and cheese.  The expression is also not confined to hawthorn - much wild leafy food has the bread and cheese accolade.

Posted by Patrick Roper at 7:15 pm No comments: 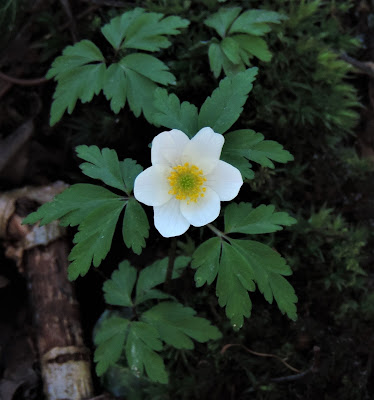 Posted by Patrick Roper at 5:21 pm No comments: 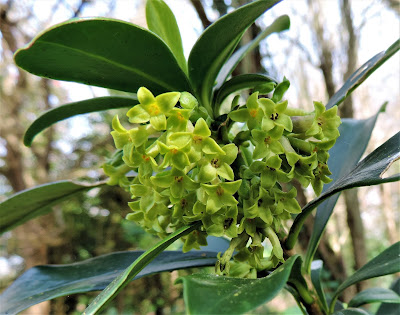 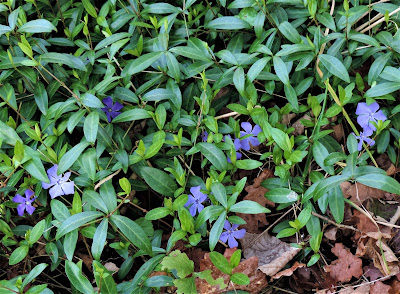 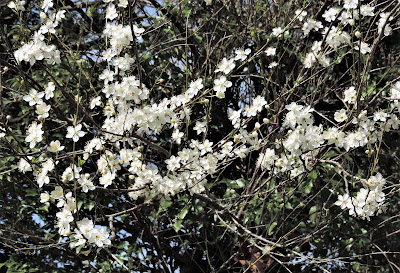 Posted by Patrick Roper at 4:35 pm No comments: 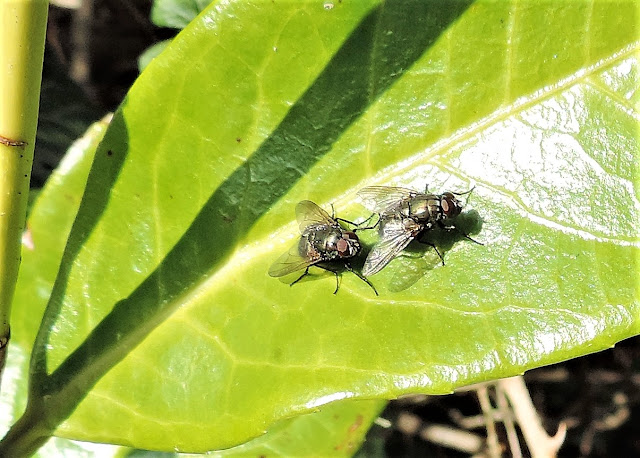 Eudasyphora cyanella, a muscid sometimes known as the green cluster fly, emerges from hibernation at this time of year.  I noticed twenty or thirty of them yesterday settling on shiny sunlit leaves of cherry-laurel in our lane.  They did not seem to be interested in other leaves and, if disturbed, quickly returned.

I think the attraction might be that they think the leaves are wet and they might be thirsty.  Some years back I made, in our garden, an artificial tree hole in a bucket filled with water and dead wood over which I hung a sleeve cage so that insects could get in via the lower open end. 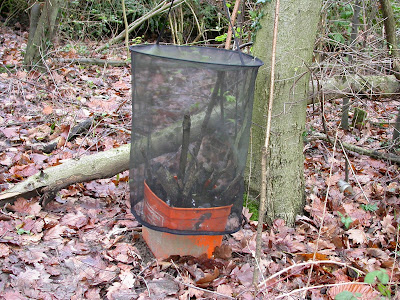 I wrote the below at the time:

On 18th April 2000, a cold, grey day with heavy showers there were, unexpectedly, seventeen of the distinctive muscid greenbottle  Eudasyphora cyanella (Meigen), all female, in the trap.  Several females of this species had occurred during the autumn, but none had been recorded since then.  E. cyanella breeds in fresh cow-dung and larvae have also been recorded from sheep dung .  Both cattle and sheep graze regularly in pastures about 100 metres from the trap, but the insects would have had to fly through woodland and scrub to reach the rot-hole.

During the next few weeks numbers of E. cyanella rose steadily, though there were several days when none, or few appeared.  Females were quite quickly joined by males and, on the 25th April, there were at least 200 examples in the trap showing a marked clustering behaviour as they gathered on the ‘roof’.  Though they were extremely active, no mating was observed.  During this period several other species of Diptera were, as usual, found in the trap but in nowhere near the quantity of E. cyanella.

On 24th April, a reasonably sunny but quite cool day, I spent some time watching the trap area in the early afternoon.  E. cyanella were sunning themselves on leaves at ground level near the trap and some would rest on the side of the bucket.  On one occasion one was observed on the rim of the bucket apparently drinking from the moisture there and on one of the projecting pieces of wood (these had by now absorbed much water).  On leaving they tended to fly up into the hanging sleeve.  The flies seemed to make little distinction between warm, sunny days and cool, cloudy ones, but numbers were much lower during or after rain, the inference being that there was plenty of free moisture available to drink from vegetation.

By 18th May the numbers of E. cyanella had fallen to virtually nil, but the species was frequently observed in the wider countryside and singletons turned up in the trap until mid-August.

One of the characteristics of Eudasyphora is that, unlike nearly all other Muscids, the adults hibernate in winter.  One of the possible explanations of the observed behaviour was that, after their winter rest, they needed to drink, though why they should be particularly attracted to a rot-hole at a period when plenty of alternative sources of water were available is not clear.  Whatever the reason for their behaviour, it had some further ecological consequences.  They produced, for example, a substantial amount of excrement much of which must have finished up in the rot-hole, thus significantly increasing the nutrient-level of a habitat which is normally nutrient-poor.  At this time the trap also attracted a considerable swarm of the biting midge Culicoides obsoletus (Meigen). They would settle in some numbers on the black netting and in rather smaller quantities on my arms and face.  They bit occasionally, but their main interest seemed to be the trap.  On looking carefully at these midges, they seemed to be more interested in the droppings of the Muscids (which adhered to the netting) than the flies themselves, though I did see them settle on some of the larger species as though to bite.  C. obsoletus breeds in a wide range of moist decaying matter and it has been reported from both rot-holes and sheep dung.  It was not, however, biting in other parts of the neighbourhood and would therefore appear to have been attracted by E. cyanella and the other flies, rather than by myself.

Posted by Patrick Roper at 5:16 pm No comments:

The other day, while walking in the 'ancient' wood at the end of our garden, I came across two iron structures with no apparent function that I could guess. 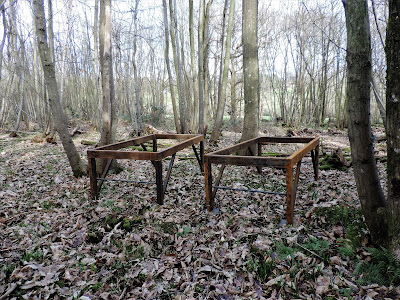 I have discovered today that they are temporary protectors to go over coppiced stools where dormice might be hibernating to protect the animals from any accidental damage.  Electricity wires run right through the wood and the power company has to clear the trees back to stop them fouling the wires.  Because it has had dormouse records over a long period to 2016, special precautions have to be taken as it is a legally protected animal and I am told that a licensed dormouse worker oversees the felling and cutting operation throughout.

The work looks pretty drastic, but it should open up the habitat in the traditional way and make it easier for the dormice to flourish. 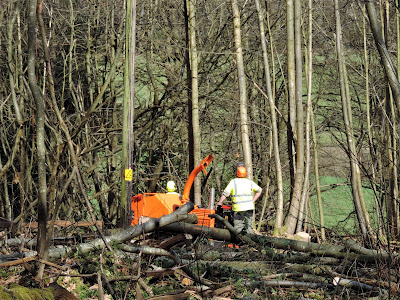 Posted by Patrick Roper at 3:24 pm No comments: