I found this procumbent yellow-sorrel (Oxalis corniculata) growing in a corner of Battle market square.  It is the form with dark leaves known as var. atropurpurea. 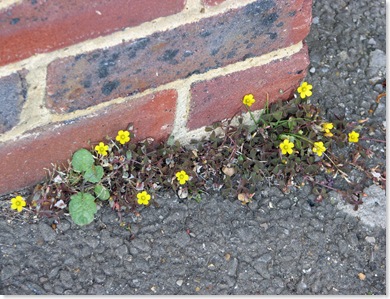 It is not a native plant and, although found all over the temperate and tropical world, no one seems to know its original home.  Its success is partly due to the fact that its explosive seed pods can expel the seeds for up to 2 metres.

Like many other Oxalis species the leaves are said to be edible and can be made into a herbal tea.

Often regarded as a pernicious weed, procumbent yellow-sorrel is said, by the Royal Horticultural Society to be "strongly resistant to the range of selective lawn weedkillers."  Hooray!

Posted by Patrick Roper at 9:29 pm No comments:

The fields to the east of the Pestalozzi International Village in Sedlescombe were today alive with St. Mark's flies (Bibio marci).  Some hovered in the air with others of their species and often they settled on the leaves of shrubs and brambles along the field edge.  These all seemed to be males. 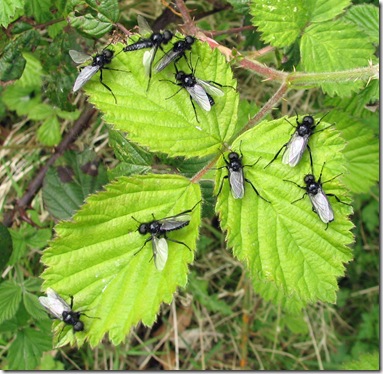 They are quite large, black flies and seem a bit threatening, but are quite harmless and indeed beneficial as they can help pollinate fruit trees.

They are named after St. Mark because they emerge around St Mark's Day, 25 April.  Prior to the 16th century calendar adjustments this was ten days earlier than it is now so 4 May is pretty much on cue.

The larvae feed on the roots of grass and decaying vegetable matter and are characteristic of old, unimproved pasture such as that at the top of North Clays on the Pestalozzi Estate.  Part of this area is a living illustration of the 'Vera Hypothesis'. 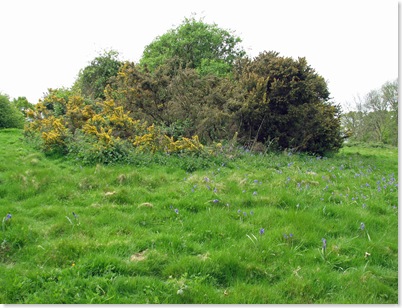 Here a clump of bushes and a tree have developed in an area ringed by nettles, brambles and gorse .  These have prevented grazing so that trees and shrubs can get away in the centre.

The grass outside this prickly grove is grazed by rabbits and, occasionally, by sheep and, because it is all humps and bumps, will not have been ploughed (at least not for a very long time).  Interestingly bluebells are scattered across the sward to the right of the picture and the plants are quite widely separated unlike the way they crowd together in woods.

It makes me wonder if the bluebell was originally a plant of open places that has been able to exploit coppicing and other woodland operations.

Posted by Patrick Roper at 11:03 pm No comments: