Generally a fine, warm and frost-free autumn.  I was pleased to see that I have managed to establish a colony of the grey ermine moth, Yponomeuta sedella, on some plants of orpine, Hylotelephium telephium. This is a nationally notable species with rather few Sussex records with gregarious larvae (see below) that eat cultivated orpine plants (e.g. Sedum spectabile) as well as the wild ones.  When young they mine the orpine leaves then form a web, like other Yponomeuta species. 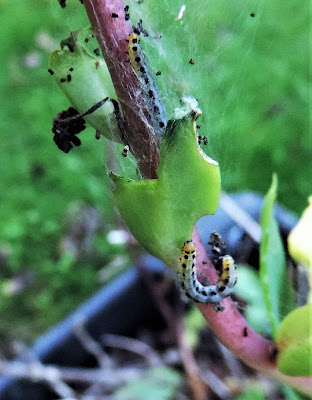 Another exciting find was an oak leaf that had been galled by the Cecidomyiid fly Macrodiplosis volvens.  In the picture below the distinctive galls are the rolled and swollen parts on the edge of the oak leaf (something else had grazed the middle) and this is the first record for Sussex known to the Sussex Biodiversity Record Centre.  I have not seen it before so it would seem genuinely scarce and I noted only one galled leaf on the young oak in Churchland Lane where I found it (TQ782188)

Another leaf modifier new to me was the microfungus sycamore silver spot, Cristulariella depraedens, whose round spots I found in abundance on fading leaves of young sycamore trees by the lower path in Killingan Wood. 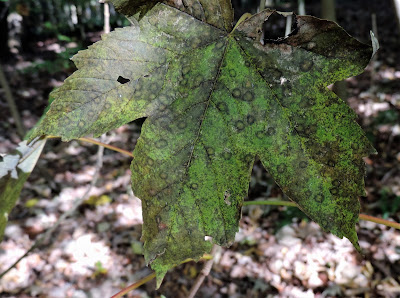 A curious 'macro' fungus was the specimen below which seems to be Scleroderma verrucosum, the  scaly earthball. The stem (or pseudostipe) was completely buried in the soil and is composed of compressed mycelial threads.  Not all examples of this species have such an elongated base. 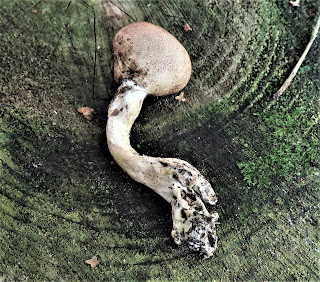 Among the many other fungi noted in November, there was a large crop of a small Mycena toadstool on our neighbour's lawn.  They were probably drab bonnets, Mycena aetites, and they had all disappeared after a couple of days (I reckon something ate them).  The leaf in the photo below is of a wild service tree that had wrapped itself around the trio of toadstools - it was not something I had arranged.  The donor tree was one I had grown from seed many years ago and planted on the verge bordering our lane. 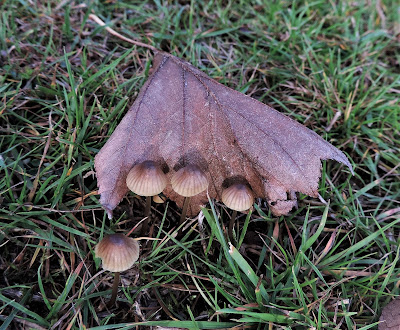 Another November surprise was of a recently arisen plant of broad-leaved helleborine, orchid Epipactis helleborine, growing on a shady bank in Killingan Wood (TQ782189).  This plant is normally larger and darker and flowers in summer.  Difficult to say what induced it to flower at such an unseasonable time of year, especially as it seemed to be a one off. 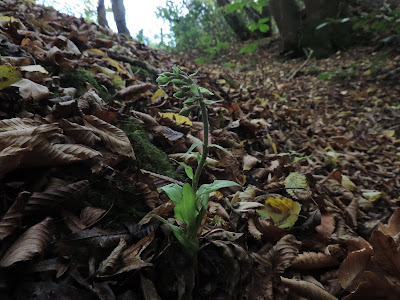 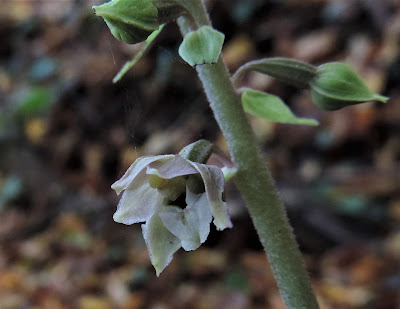 This orchid, whose identity was confirmed by David Lang, the Sussex orchid recorder,, is quite common in our area, but I have found no more November flowerers.

Posted by Patrick Roper at 12:49 am No comments: