A yellow-line quaker moth (Agrochola macilenta) settled on the outside of our kitchen window yesterday night.  It is an autumn-flying species, but rather infrequently recorded as late as December.  It is said to be attracted to decaying apples.  A. macilenta is a widespread species in England with larvae that feed on a variety of deciduous trees or, in the north, heather (Calluna). 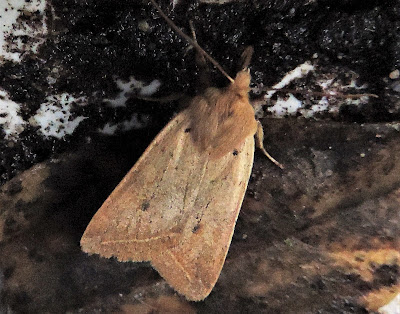 The adult moth is rather sparingly and inconspicuously patterned (macilenta means 'lean' or 'meagre' referring to the markings), they are however distinctive especially the yellow and red almost straight submarginal lines that do not quite make it in good order to the wing tip.
Posted by Patrick Roper at 7:17 pm