I have often wondered at the striking resemblance between the fading , autumnal leaves of alder buckthorn (the food plant of the brimstone butterfly in our area) and the yellow of the butterfly itself.  Even the antennae of the insect are the shape and colour of the buckthorn leaf stalks. 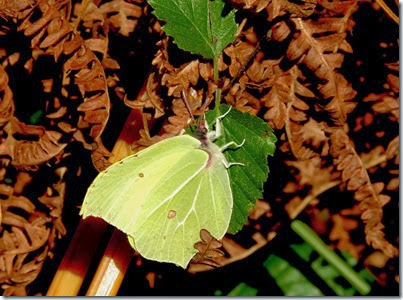 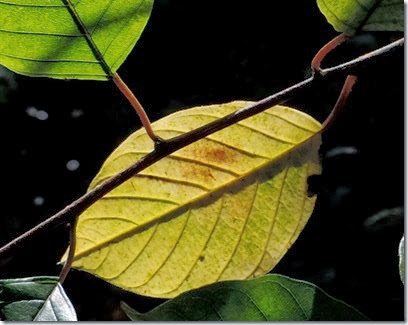 I have wondered because brimstones do not seem to be on the wing when the buckthorns are turning yellow, but on 30 October I saw the fine fresh male above fluttering around a bramble patch in nearby Brede High Woods.  This is the latest I can remember seeing an adult on the wing though, according to the literature they have often been recorded in mild weather into early November.

The male I saw was in that part of the woods where alder buckthorn reaches its greatest abundance, and these butterflies are common here in spring.  My interpretation of this late October event is that the male was looking for somewhere to hibernate (bramble patches are a frequent choice) but was positioning himself near the buckthorns that would attract the females after hibernation in spring.  The butterfly I saw was visible from a long way off, but I think I would have been hard put to it to spot him if he had chosen to settle in a buckthorn like the one below. 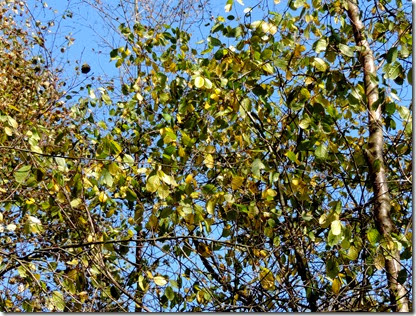 On this principle I suppose one of the butterflies settled among the buckthorns in spring or summer might be thought to be an unseasonal dead leaf.

On a slightly different point, I wonder why the females are paler than the males.  Does this dimorphism convey some evolutionary advantage?

Posted by Patrick Roper at 10:19 pm No comments: