The berries on our native ivy seem to be ripe already. 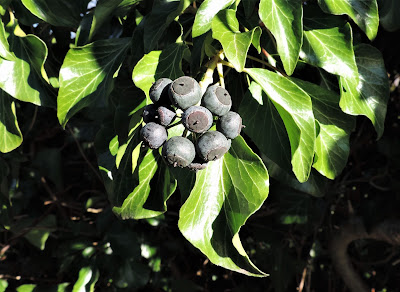 This is quite early for them, often they will not be ripe until well into spring.  There are many birds that eat the berries though the seeds pass through their gut (seed dispersers).  Woodpigeons are also very fond of them but they digest the seeds (seed predators).  The fruits are nutritious with a high fat content but they are toxic, though birds normally seem to be able to deal with the toxins.  Barbara and David Snow in their splendid book Birds and Berries (T & A D Poyser, Calton, Staffordshire. 1988) say that woodpigeons destroy most of the ivy berry crop.

We also have a bush of arborescent Persian ivy (Hedera colchica) but the seeds on this are still unripe.  It makes a non-climbing dome-shaped bush about two metres high that is convenient for watching the various insects that gather on the blossoms in the autumn. 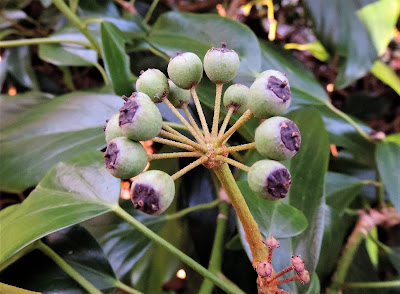 One conundrum regarding ivy berries concerns the holly blue butterfly (Celastrina argiolus).  Many books say that the larvae feed on these berries among those of other plants.  Jeremy Thomas, for example, says in his Butterflies of  Britain and Ireland (1991) that "larger ivy berries may also be completely devoured, but the cups remain as evidence."  He also says the eggs of the summer generation are laid on ivy buds.  The larvae occur in May and June and August and September so they are not normally present when there is any appreciable crop of ivy berries and I wonder if the flower buds are sometimes confused with fruit.  Whether buds or berries, holly blue larvae eat the insides rather than the outsides and the 'cups' to which Jeremy Thomas refers must be the outer layer of the buds (or fruit) as they do not have cups like acorns.

Richard South in his classic 1915 The Butterflies of the British Isles quotes extensively from a paper by Adkin describing how the second brood larvae tackle ivy buds, saying in conclusion that they quit the buds in order to pupate.

Posted by Patrick Roper at 6:18 pm