Yellow archangel: more than meets the eye (or nose). 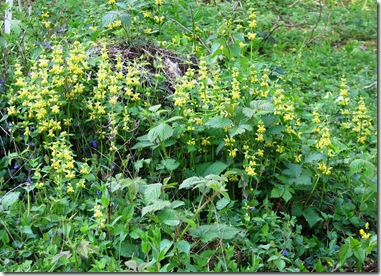 It has done very well indeed this year in the area of coppice just up the road and makes a wonderful contrast to the bluebells.

It did not, however, seem a very exciting plant - few insect associates, few medicinal properties and, like many plants that are not actually poisonous, said to be edible when young.

The specific name is also not very inspiring as it is supposed to indicate that the plant smells like a weasel or marten and some claim that weasels smell worse than skunks.

However, after a few minutes research I discovered that yellow archangel is used as a garnish by the celebrated Danish chef René Redzepi, of the Copenhagen restaurant Noma, winner of this year's Restaurant of the Year Award.  See here for some of his recipes:

Apparently Redzepi sprinkles raw flowers and shoot tips of yellow archangel over a dish of baked celeriac and black pudding also garnished, of course, with salted ramsons seeds pickled in vinegar.  I am sure that the mustelid aroma would add greatly to the quality of this dish.

My family is in for a gastronomic treat this weekend. 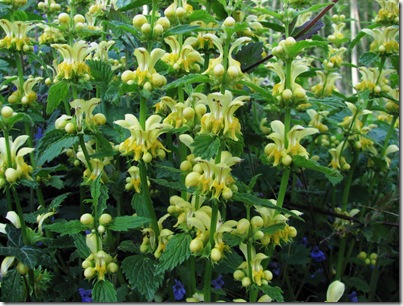 Since penning the above I have, in the interests of both science and gastronomy, sampled leaves and flowers of yellow archangel.  I am happy to report that I could detect no unpleasant aroma and the taste was leafy and slightly nutty - a bit coarse, but not disagreeable.

So, maybe galeobdolon (a name coined by ancient Greek physician Dioscorides) has nothing to do with the smell of weasel unless it was used mischievously to deter people from collecting the plant for the kitchen.  Alternatively the word may have something to do with galea the Latin (and ? Greek) for a helmet from the shape of the flowers.  And anyway, perhaps Dioscorides didn't mean yellow archangel as we know it.

Posted by Patrick Roper at 8:55 pm No comments:

In Killingan coppice today I started to look for orange-tip butterfly eggs on the stand of lady's smock (Cardamine pratensis). 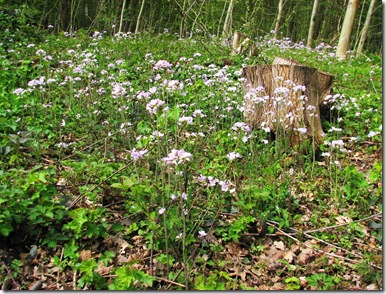 It was almost too easy.  On the first plant I looked at there was a solitary characteristically shaped orange egg carefully placed beneath a flower stalk (see picture below near centre).  They are usually put on their own like as though the mother knows that her caterpillars will have strong cannibalistic tendencies . 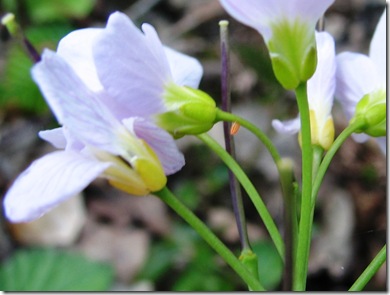 With a good deal of luck this will have turned into a butterfly by next May.  Below is a female of the species. 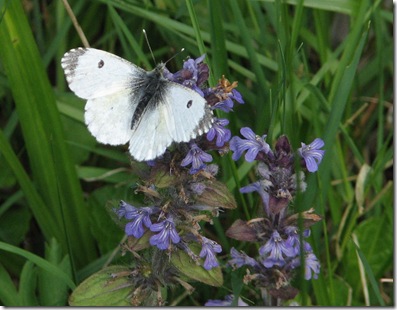 Posted by Patrick Roper at 1:20 am No comments:

Today, Bank Holiday Monday, was showery and cold.  Great dark clouds rose up to the east of our garden showing off to perfection the flowers on the wild cherry (Prunus avium).  As Housman wrote "Loveliest of trees, the cherry now/is hung with bloom along the bough," 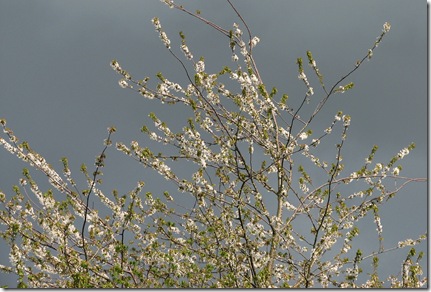 Cherry trees are the subject of a 3-year survey being organised by the Natural History Museum, though they are largely interested in garden cherries as part of a general interest in the significance of gardens for biodiversity.   See here: http://www.nhm.ac.uk/nature-online/british-natural-history/tree-survey/index.html 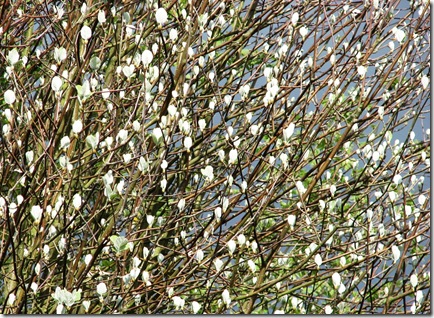 Also foregrounded by the clouds and sunshine were the opening leaf buds of whitebeam (Sorbus aria).

Posted by Patrick Roper at 6:36 pm No comments: