A week ago I found a mine in the folded edge of an oak leaf on a tree growing near the end of Billingham Lane, Udimore (first field trip of the new Udimore Wildlife Society). 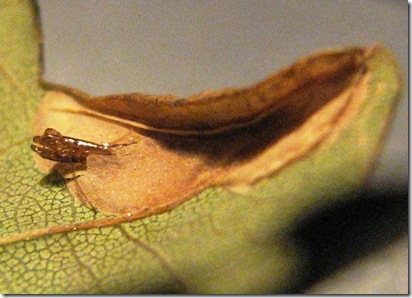 I identified it tentatively as being caused by the white oak midget moth (Phyllonorycter harrisella) and kept it in a box to see if anything emerged.  I was rewarded today by this tiny but beautiful insect hardly bigger than a grass seed.  Its pupal case can be seen in the top photo. 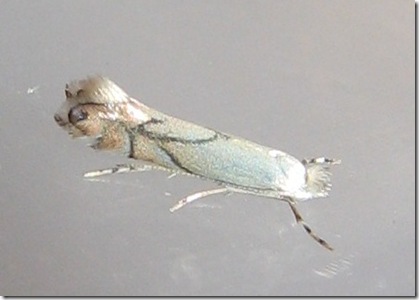 Like many insects, the eye spots at the end of the wings create a false head which is more likely to be attacked by a predator allowing the moth to escape relatively unharmed.  The wing stripes also seem to make it point in the wrong direction.

Leaf miners like this usually appear only in very small numbers on their host plants, an I wonder why this should be when there is so much food available.  The infamous horse-chestnut leaf miner (Cameraria ohridella) which is a species of about the same size and in the same family - Gracillariidae - was first recorded in Britain in 2002 having spread rapidly from the Balkans.  Although it was described as a new species only in 1986, specimens in herbarium collections of horse-chestnut date back to 1879 but it was well-behaved until very recently.  Cameraria now seems unstoppable and every single leaf on every horse-chestnut is often infected with several mines.  Why do our long-standing native species like the white oak midget show such commendable restraint?  Is it due to parasites, predators or pathogens that Cameraria does not yet have?  Some believe it is and that the current massive infestations of horse-chestnut will decline as the years go by.

Of course, the relative scarcity of the white oak midget with, say, only a few mines per oak tree may be an advantage inasmuch as it makes it quite difficult for predators and parasites to find it and hardly worth the energy-wasting search for such a small morsel.  That makes me wonder about the dynamics and practicality of remaining at a low-level without being wiped out altogether.

Posted by Patrick Roper at 10:06 pm No comments: