House circuit (14) The day of the butterfly 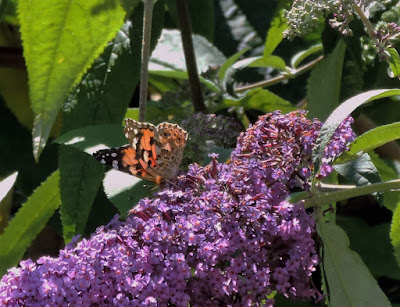 It has been warm, but not heatwave level.  In the early afternoon it was 26 C.  The number of butterflies in the garden seemed unusually large and I noted 8 species: peacock, red admiral, painted lady, meadow brown, gatekeeper, large white, small white, green-veined white, brimstone.  There are also commas and holly blues about but I did not see them today.  Mostly they seemed attracted to the purple spikes of buddleia, but Geranium x oxonianum 'Claridge Druce' was also popular, especially with the whites.  This is, perhaps, a good example of how important gardens are as there seem to be rather few nectar sources in the countryside round about at the moment.

The picture at the top is a painted lady and the one below two small whites courting on a grape vine leaf. 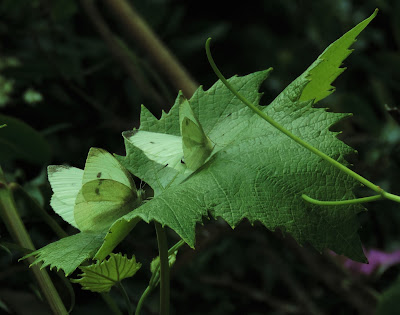 Posted by Patrick Roper at 10:34 pm No comments: 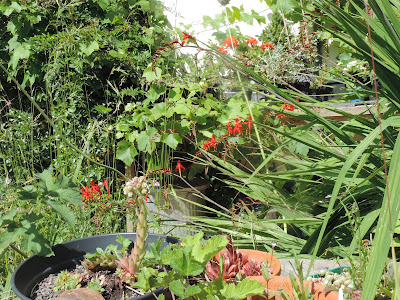 A female brimstone .... Rust on rose leaves.  The Babbington's leeks.  Koromiko, Hebe salicifolia, full of bees and bloodsuckers; meadow browns and spiders, it has a sweet, elusive scent.  Wool carder bees are hovering above the columns of houseleek flowers.  Lolium perenne, perennial rye-grass.  Brachypodium sylvaticum, false brome grass, has lovely spikes with spikelets that dangle creamy anthers, the whole making troupes of elegant mobiles measuring the air.  I walked in Tony & Marion's garden next door. Tony has been confined to his house in Caterham lately and has not been able to give the lawn and hedges his usual attention.  Big Ian from just down the lane does his mowing for him.  I picked a bunch of chives in our plot as I had run out of onions for a stew.  The chameleon plant, Houttuynia cordata, named after the 18thC Dutch botanist Martinus Houttuyn, has flowered by the back door.  The leaves are edible.  It was very hot 30.3C at midday I walked to the village through the sunshine.  The meadows are rich with tawny brown seeding grass with red clover in small patches. Insects seem scarcer than ever meadow browns, gatekeepers and whites in small quantity, but the skippers have all gone and the umbels of hogweed are uncharacteristically empty of their jostling fauna.  At night only the occasional moth visits the kitchen window pane where in the past we had many different species over the year.  All these small creatures through their various stages had a biotic affect on the countryside that must now be dangerously altered and the natural cycle of growth and decay slowed with unknown consequences.  Allium bulbils, holly blue, crested dogstail like some ancient oath.  The ground was strewn with bird cherry fruit - glittering beads of jet; morellos ripened in the hedge, cherry red temptations for the birds.  The garden of sin.  The wet warm summer has produced large quantities of slugs and snails that are eating their way through the more palatable plants.  A butterfly, victim of a white crab spider hung motionless among the white spikes of the koromiko.

Posted by Patrick Roper at 5:13 pm No comments:

Outside the sitting room window we have a large, waist-height black bin which fills with water and mosquito larvae.  To reduce the mosquito problem I bought two fish last year, a goldfish and a shubunkin (which is a type of goldfish).  These fish of the carp family are omnivores, eating both insects and plants. The goldfish seems to have disappeared, but the shubunkin looks happy and healthy and I say hello to it every day.  I add various water weeds with their attached fauna to the bin if I bring examples from my field trips and the whole makes a low-maintenance ecosystem. 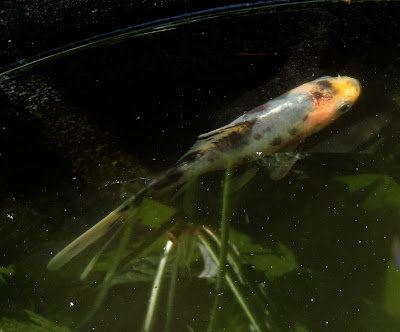 Shubunkins, with their characteristically mottled colours, were bred in Japan just over 100 years ago (the name is Japanese for 'red brocade').  Amazing how one can get quite fond of a fish (see centre left below).  The object in the water on the right is, I think, a dead leaf. 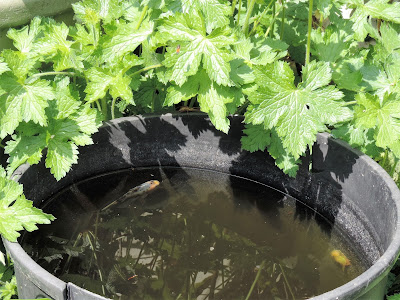 Posted by Patrick Roper at 8:49 pm No comments: 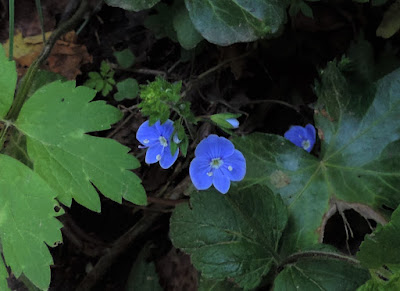 One of the prettiest flowers of late spring in our area is the germander speedwell, Veronica chamaedrys.  The word 'germander' derives, through Latin and French, from Classical Greek khamai drus meaning 'ground' or 'creeping oak'.  The word 'germander' on its own is used to describe many of the plants in the genus Teucrium.  At Rye Harbour near here there is, for example, a small population of wall germander, Teucrium chamaedrys, which has mauve flowers and leaves shaped like small oak leaves.  There is also a speedwell from mainland Europe, saw-leaved speedwell, Veronica teucrium (the scientific name translates as 'germander speedwell') with bright blue flowers.  I suspect that in the past when these plants were valued by herbalists the various names were confused and our Veronica chamaedrys came out as germander speedwell.  Phew!

The word 'germander' rarely occurs in other contexts, though John Donne, the 16th/17th C English poet refers to a Sir Germander Pool in one of his letters.  May be he made it up to describe a particularly blue eyed knight.

Modern taxonomy, for those of you that like interesting information, has transferred the plant from the family Scrophulariaceae to Plantaginaceae, though it does not look anything like the plantains (but nor does it look like scrofula).  All to do with DNA no doubt.

It is the foodplant of the larvae of a tiny, but attractive Adelid moth Adela fibulella, sometimes called Frisch's gold long-horn (after, I think, the 18th century entomologist Johann Leonhard Frisch). It is  often seen visiting germander speedwell flowers and I watched one earlier this year wandering about on a bramble leaf on the lane to our village.
For a picture of the moth see here: http://ukmoths.org.uk/species/cauchas-fibulella

Unsurprisingly the plant features frequently in alternative medicine sources as being useful to staunch wounds and to alleviate, among other things, indigestion and jaundice.  I am suffering from both after political events in the UK over the past few weeks and might try a cup or two of germander speedwell tea to calm my spirits.

Posted by Patrick Roper at 3:56 pm No comments: