A trip to the Brick Pit

Bright sunshine punctuated by heavy rain squalls today.  I walked to the Killingan Wood brick pit and found some galls of the mite Eriophyes laevis on the leaves of some of the alder trees. 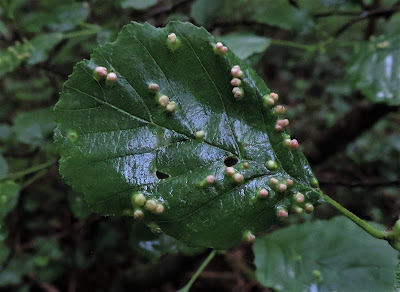 On the way I noted the first flowers out on field rose (Rosa arvensis) a species that can be distinguished by its creamy white flowers, sea green leaves and purple tinged stems.  One such stem can be seen to the right of the flower in the photo below. 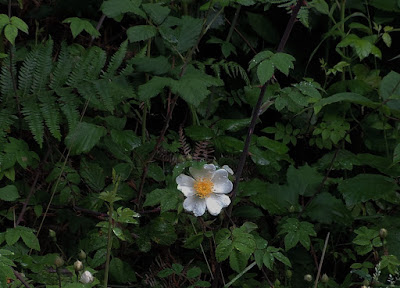 The storms have blown hundreds of yellow and brown leaves from the wild service tree (Sorbus torminalis) that grows in the lane outside our house.  The problem is fire blight caused by the bacterium Erwinia amylovora and this particular tree suffers every so often.  All the yellow leaves blow off quite quickly and about 75% remain green and healthy while the tree as a whole appears to suffer little permanent damage. 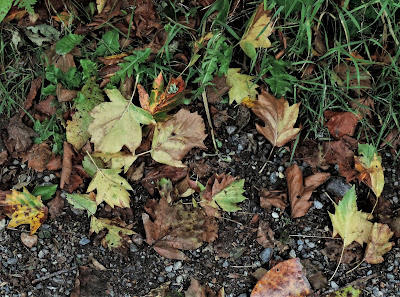 On the way home I inspected the great mullein (Verbascum thapsus) plant by the hedge that is home to a substantial colony of mullein moth (Cucullia verbasci) caterpillars.  I hope they don't completely devour the plant before they are fully grown.  Great mullein is not a common plant in our area and it is remarkable that the females are able to find it to lay their eggs. 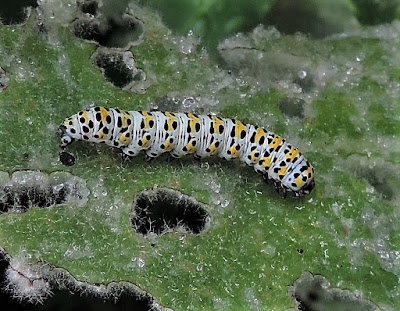 After a period of some personal turmoil I have decided to merge \ramblings of a Naturalist and the Square Metre blogs into one.

Today, 11th June 2019, was quite an eventful one at Emthree (an alternative name for the Square Metre) as my little garden bench fell over backwards and deposited me in Brambly Hedge.  On the wildlife side the small wild rose that grows on the edge of Troy Track has opened its first flower (see photo below), but I shall have to wait until it is a hip to attempt to put a name to it.  The rose that grows immediately behind it is a different species resembling a field rose (Rosa arvensis) but there is no purple staining on the stems (one of the characteristics of this species).  Towards the back of M3 there is the now quite large small-flowered sweet-briar (Rosa micrantha) which has flowered in the past but not this year.  It grows high up in the ash tree which has died of, I assume, ash die back disease.  I do, however, have two younger ash plants in The Waste that look perfectly healthy. 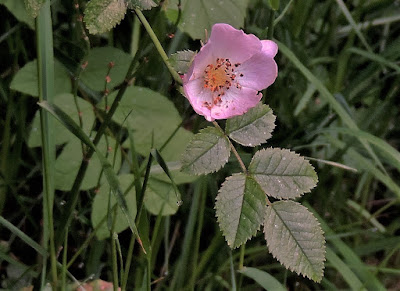 In addition to the rose, the first flower opened on Emthree's cinquefoil on the edge of Troy Track.  I think it is Potentilla anglica, but this is another tricky species to separate from other cinquefoils.  There is also a sprinkle of purple flowers on narrow- leaved vetch (Vicia sepium ssp. nigra) and a few white herb roberts (Geranium robertianum)

A month or so ago I made a small pool out of a wide-necked, glass jar that had contained Polish pig's head terrine.  So far it has attracted some small black mites, a very lively meniscus-walking springtail and a mosquito that stood with legs spread on the water surface.  It reminded me of Yeats's poem Long-legged fly:


Like a long-legged fly upon the stream
His mind moves upon silence.

Another exciting development in Emthree is my construction of a stone row along the top of what I call Churchland Ridge. 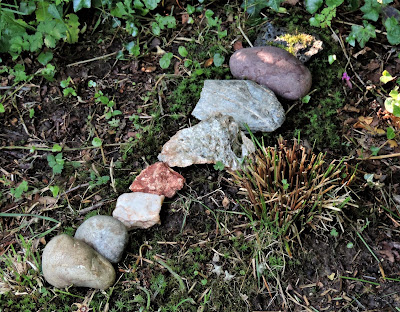 The installation comprises some assorted stones given to me by Michael Hawkes, a friend from Canada, plus two large beach pebbles I found locally.  Both these pebbles were on the side of a local footpath running between two gardens and I suspect there had been some landscaping with stones of this sort and animals (for reasons best known to themselves) were transporting them to the footpath.  Anyway they both go towards making a mini Andy Goldsworthy creation, though I claim no particular skill in this genre.

After a day of cold, heavy rain the woods were fresh and samp during my afternoon walk.  A few fungi are even starting to appear and by the Churchland Wood path there was a somewhat nibbled example of what looked like a panther cap (Amanita pantherina), though it may be the very similar Amanita excelsa.  I shall have to check.
Posted by Patrick Roper at 8:24 pm No comments: