In my small Native Sussex Fernery outside our kitchen window the fronds of the royal fern, Osmunda regalis, are climbing rapidly.  The taller ones rather remind me of Henry Moore's famous sculptures of Three Standing Figures.

These shoots are edible and were/are an ingredient in namul a dish of steamed vegetables used in the cuisine of the Korean royal court.  In Japan they are called zenmai.  In the interests of gastronomy I boiled a stalk with head for 5 minutes in water with bicarbonate of soda (it turned the water pale mauve), then rinsed it and ate it.  It was very bland with a faint nutty taste, but not unpleasant.  A good vehicle for oriental seasonings maybe.

As the picture shows they are a distinctive purple colour.  The name 'royal' is said to derive from the imposing size of the fern when fully mature, though mine are not that impressive, so I wonder if the name comes from the colour of these young stems.  Purple has long been associated with royalty.  On the other hand, as my plant came from a local nursery stall, it may be that I have the form 'purpurescens', though the leaves when expanded are plain green. 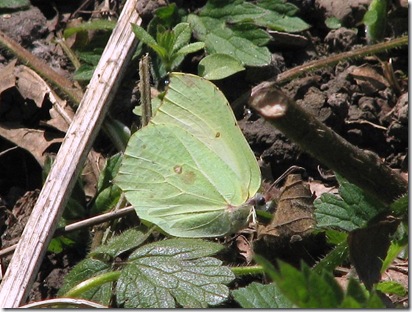 After a while she settled on the ground for a rest, tilting over on one side so that she was not very obvious despite her colour.

Later she returned to egg laying in the buckthorn bush until chased away by an irritable-looking blue tit.

Posted by Patrick Roper at 9:56 pm No comments: