One of the more modest spring manifestations  is the fruiting of some of the liverworts.

This one is variable-leaved crestwort (Lophocolea heterophylla) a common species often found on damp decaying logs.  This example was in our Sedlescombe garden. 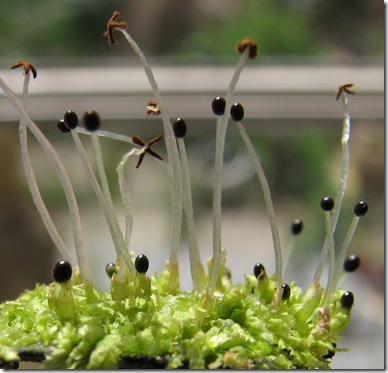 Posted by Patrick Roper at 1:24 pm No comments:

On the south eastern edge of Footlands Wood, Whatlington this afternoon I found a series of magical ponds, perhaps the remains of old iron ore workings.  The Footlands site is known to have been active in the Iron Age before the Romans arrived and that great authority Henry Cleere says it appears to be a site worked by the Regni, a British 'tribe' possibly set up by the Romans. 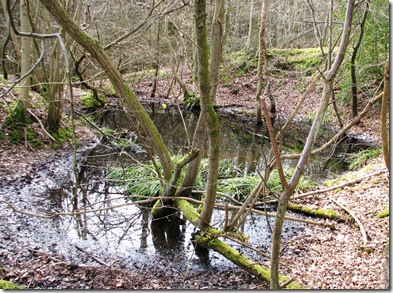 A few metres from this a Roman road from Compasses Gate curves close to the wood where these ponds are and a short distance further down the Rusty Brook valley ancient flint arrowheads and Bronze Age artefacts were once found.

It was all very peaceful today, the only sound being from the birds and the frogs hopping lively into the water as I approached.

My enjoyment of this mysterious and really rather remote place was crowned by the discovery of an ancient wild service tree (Sorbus torminalis) coppice on a bank at the southern end of the pond (see below).  I have been to Footlands Wood many times, but this is the first wild service I have found - and it was my birthday. 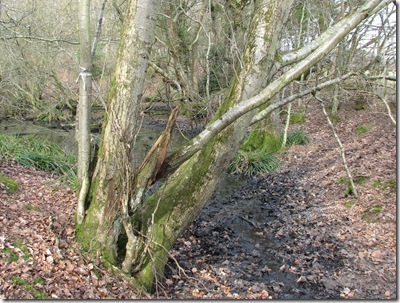 Posted by Patrick Roper at 9:18 pm No comments:

At last some spring-like weather has arrived, with warm sunshine this morning, though little is moving yet and gorse is about the only obvious flower.

For the last couple of weeks they have been laying the hedge at the top of the lane. 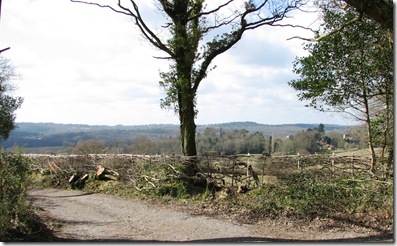 This has opened up the view to the west and south west and it is very impressive as one comes round the Killingan Wood corner on the way home.

Our Sedlescombe parish church across the fields is on the right under the holly.  The lowest point on the horizon, towards the left of the picture, is where the Battle of Hastings was fought in 1066: Anglo-Saxons on the right, Normans on the left.

Posted by Patrick Roper at 12:40 pm No comments: 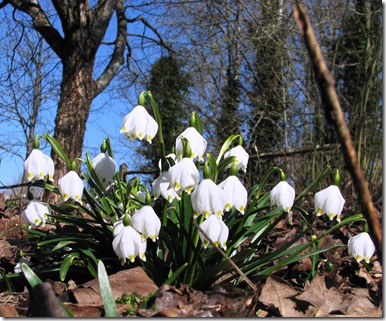 Outside the Sussex Wildlife Trust's offices at Woods Mill near Henfield there are a few clumps of spring snowflake (Leucojum vernum) that are putting on a particularly fine show this year.

This is not a native plant, but it does escape from gardens from time to time and has become naturalised in  parts of the UK.

These examples are slightly unusual inasmuch as they have yellow instead of green spots towards the tips of the petals and might therefore be the form known as var. carpathicum, also quite widely grown.

The larger tree second from left behind the clump is a wild service, Sorbus torminalis.

Posted by Patrick Roper at 2:06 pm No comments:

Today was lovely and sunny, quite a change after the cold and wet we have been enduring for many weeks.  They say it has been the coldest winter for 30 years and it is not really over yet.

Looking out of one of our sitting room windows I was pleased to see how it framed some hazel catkins in the hedge beyond. 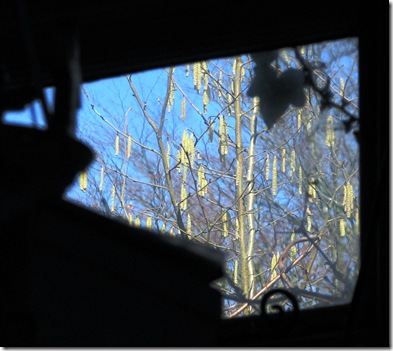 Inspired by this I took a walk in the woods past two strange trees that I see almost every day.  One is a large oak with branches derived from epicormic shoots sprouting from the trunk. 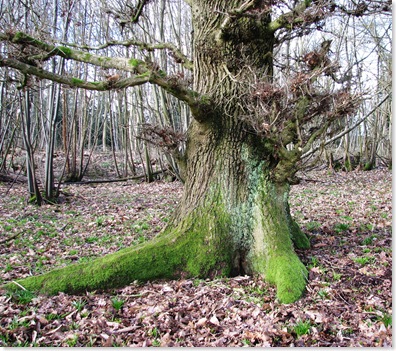 The other a high coppiced sweet chestnut, almost a pollard.  This is usually done to mark the edge or corner of a coup and not because the woodman could not be bothered to bend. 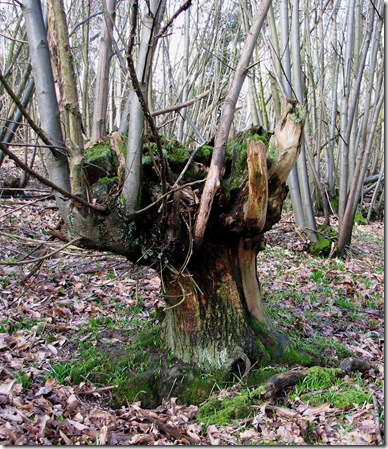 Back in the garden the sunshine had provoked the snowdrop flowers to expand fully, albeit about a month late. 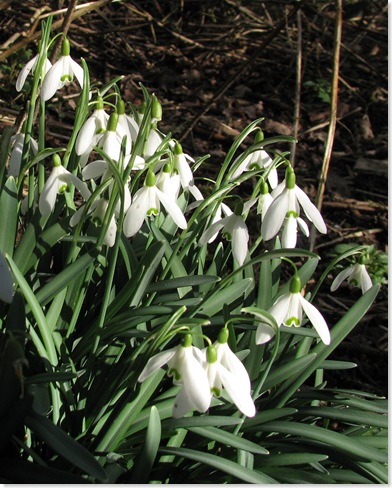 Posted by Patrick Roper at 7:29 pm No comments: