Despite the mild and rather drab days we are having, I find much to ponder in my short walks round the neighbourhood.  I was entranced by two trees, a birch and a field maple, the latter still holding its leaves.. 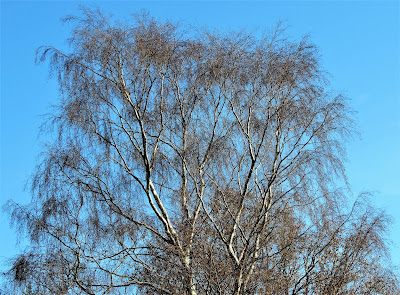 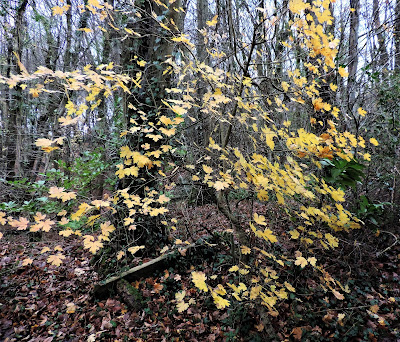 It led me to Robert Frost's poem about birches in which, among much else, he says:

I’d like to go by climbing a birch tree,
And climb black branches up a snow-white trunk
Toward heaven, till the tree could bear no more,
But dipped its top and set me down again.

I also liked the phrase by poet Marchant Barron where he describes the golden-yellow leaves of the field maple "as if touched by Midas in the season of alchemy."

In Killingan Wood, which seems very brown and quiet at this time of year I noticed some almost military lines of slime-mould fruiting bodies on a log. 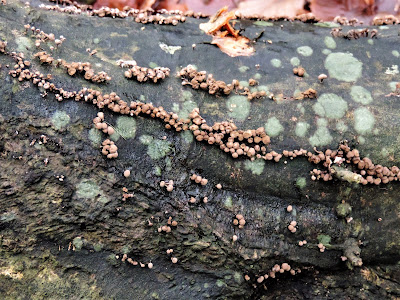 Later in Churchland Wood I found an extraordinary sky blue 'lichen' (below).  I wondered if something had happened to a normally grey or green species to cause this and will try to find out more.  On 23 December my friend Howard Matcham suggested it might be cobalt crust fungus, Terana caerulea this seems a possibility, but it has also been suggested that it could blue paint that somehow was splashed on this branchlet.  I do not think it is paint as there is only a small quantity here and searching as I do almost every day I would have been likely to see anything marked with such bright blue elsewhere. 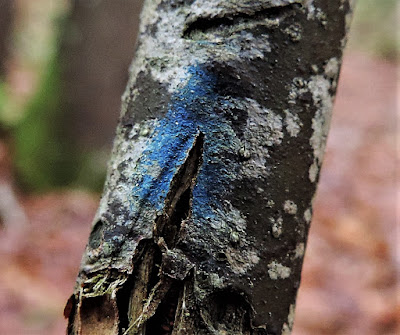 Posted by Patrick Roper at 6:26 pm