Veteran oak in the High Weald 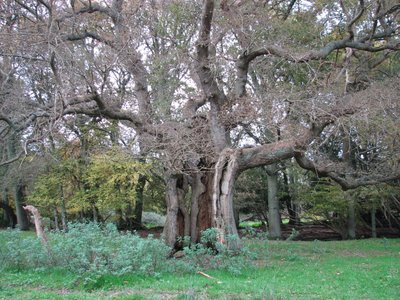 As it is National Tree Week (22 November - 3 December), I thought I would post a picture of a wonderful ancient oak tree I came across a few days ago. It is deep in the countryside to the south of Burwash Weald, East Sussex and clearly has been pollarded long in the past. Despite the fact that its trunk is half missing and hollow it seems to be in robust health, though the more horizontal branches will be getting very heavy and will eventually fall.

It probably should be re-pollarded in stages, but this is a tricky course of action and it will be essential to get advice from experts in the management of ancient trees. The longer it survives, the more chance there will be for some of the invertebrates and lower plants associated with this kind of habitat to colonise the middle-aged oaks behind as they grow older.
Posted by Patrick Roper at 5:36 pm No comments: 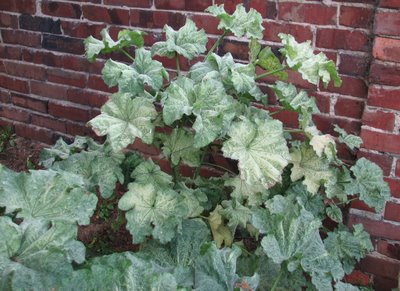 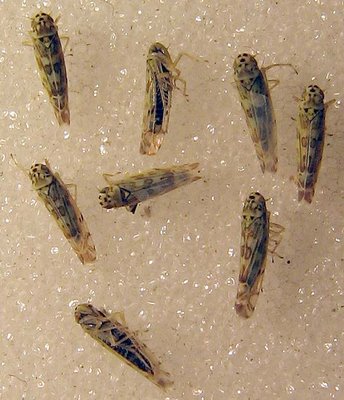 Another discovery from my epic field trip to the suburbs of Bexhill-on-Sea. In an abandoned garden I found many large plants of tree mallow, Lavatera arborea. Their leaves were an unusual whitish green (see top picture), undoubtedly the effect of locust-like numbers of the plant hopper Eupteryx melissae that flew from the mallows in clouds evey time one of the plants was shaken.

This hopper, which also feeds on labiates, has not often been recorded in Sussex and,though I have frequently come across tree mallow, I have not seen the insect before.

People sometimes ask how I identify some of these more obscure insects. In a case like this where the species is clearly associated with a plant whose name I know I usually go to the Ecological Flora of the British Isles.

Under tree mallow there are only two options among the insects that enjoy eating this plant and one of them is a leaf hopper (Cicadellidae) called Eupteryx melissae. There are some pictures of this on the Internet and I get confirming details from the Royal Entomological Society's Handbook on the Cicadellidae.

Posted by Patrick Roper at 10:36 pm No comments: 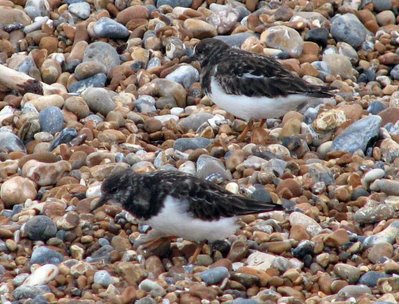 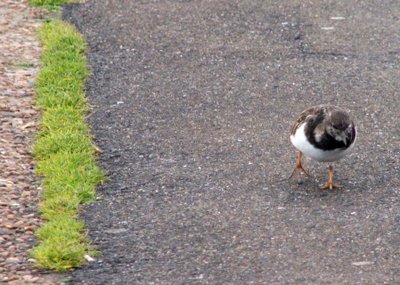 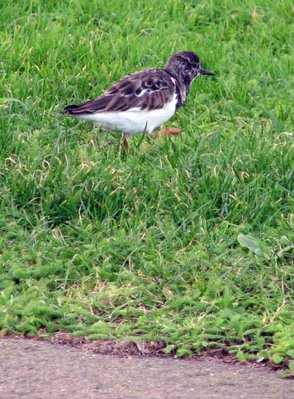 I was watching a small flock of turnstones working their way over the shingle beach in a very urban part of Bexhill-on-Sea this afternoon.

I was surprised when they hopped up on to the promenade and wandered about like so many little town pigeons. Eventually they crossed to the wide strip of close-mown amenity grassland backing the promenade and were still busily feeding there when I left.

This small water-bird is generally widespread round the coast of Britain in winter.
Posted by Patrick Roper at 6:28 pm No comments: 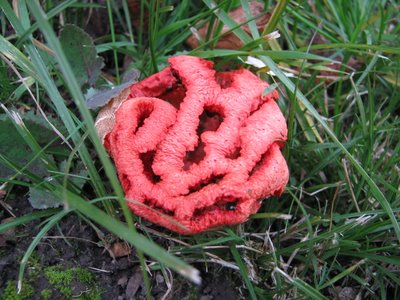 Walking down to the village shop in Sedlescombe, East Sussex today I was surprised to see a perfect fruiting body of a red cage fungus, Clathrus ruber.

It was growing among grass at the base of a hedge by a well trodden path close to the main road and it is the first time I have ever seen one.

Roughly the size of a tennis ball, this strange vegetable is a type of stinkhorn and does have a very bad smell to attract the flies that spread the spores found in the gooey black slime inside the lattice. From a distance it did not look like a living thing at all but more of a convoluted and twisted piece of plastic the product, maybe, of a 5 November bonfire.

The red cage is another one of these 'Mediterranean' species that are extending their range supposedly due to the warming of the climate and has followed very much the same route as the ivy bee, Colletes hederae, appearing first in the Channel Islands then later along the south coast and the West Country. I have not yet found any previous Sussex records, but I am sure there are a few and would be interested to hear from anyone if they know of any.
Posted by Patrick Roper at 8:46 pm 5 comments: 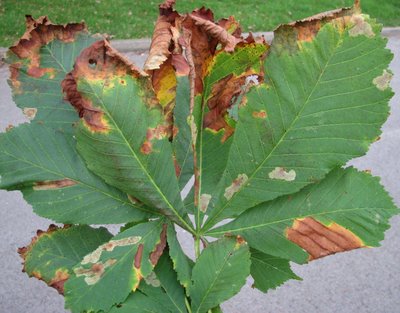 Today I found a large horse chestnut in Oaklands Park, Sedlescombe, quite heavily infested by the fairly-new-to-Britain leaf mining moth Cameraria ohridella. I think this must already have been recorded in Sussex though I have not been able to find anything specific.

This species, which has been much in the news lately due to the damage it is doing to horse chestnut trees, was was first observed in Macedonia in the late 1970s and was described as a new species of the genus Cameraria in 1986. In 1989 it appeared unexpectedly in Austria and has since spread throughout central and eastern Europe. It was first found in the UK in Wimbledon in July 2002 and has since been recorded in many parts of south-east England.

Brown patches on horse chestnut leaves are also caused by the fungus Guignardia aesculi and these may be confused with mines of C. ohridella. However,the blotches caused by the fungus are often outlined by a conspicuous yellow band and do not appear translucent when held up to the light.

In the picture above the difference between the greyish white blotches of the leaf mines and the darker brown, yellow edged patches caused by the fungus can be clearly seen.

For more details on the moth and of the Forestry Commission survey of its spread follow this link.
Posted by Patrick Roper at 6:21 pm No comments: