20 August 2016.  Very windy and showery after the warm summer spell.  I did see one butterfly – a holly blue - from the sitting room window.  Despite the cool, hoverflies and bees seemed to remain active.  I noted Bombus pascuorum on orpine flowers – I have a growing list of insects visiting the plant.  Among the hoverflies the snout-faced, Rhingia campestris and the long-tailed, Baccha elongata, seemed to enjoy the cooler weather.

On a hazel leaf I found a long, narrow mine characteristic of the tiny moth, the least nut-tree pigmy, Stigmella microtheriella.  According to A. Maitland Emmet in his book on the scientific names of British Lepidoptera the specific name derives from Ancient Greek micros (small) and therion (a small creature) – splendid example of a tautology.  When the name was given to the insect by Stainton in 1854, it was thought to be the smallest moth.

There is a rather fine honeysuckle flowering outside the back door.  It looks like Lonicera periclymenum ‘Graham Thomas’, with its dark green leaves and late flowering habit.  It seems to agree with many of the pictures on the Internet.  It is certainly a cultivar, probably one that Sammy bought in a pot that has somehow managed to survive in the dark recesses on the north of the house.

19 August 2016.  Rain showers for much of the day bring some needed refreshment to the countryside.  Because of my leg ache from yesterday, I went out rather little.

18 August 2016.  The blue pimpernel, Anagallis arvensis ssp. foemina was flowering in the Old Woodyard and later, at home, I found the rather fine plume moth Amblyptilia acanthadactyla, the beautiful plume, on the lighted kitchen window pane.

17 August 2016.  Two moths late last night on the kitchen window the common grass veneer Agriphila tristella, and the red twin-spot carpet, Xanthorhoe spadicearia.  The identity of the latter had to be checked via an examination of the genitalia.

Butterflies remain rather scarce, though a brimstone put in an appearance on the buddleia and I saw a small white briefly visiting the orpine flowers (which are still regularly patronised by bumble bees).

There were several holly blues in our large buckthorn bush.  They were flying from one place to another and constantly settling as though laying eggs.  Alder buckthorn is an alternative foodplant and in France the butterfly is called the 'buckthorn blue' (azuré des nerpruns).

16 August 2016. Butterflies rather scarce again, though I watched a holly blue laying eggs on ivy in the northern hedge.  A migrant hawker hung itself up here and I found a very dark worker middle wasp very sluggish on buckthorn flowers.  I found a figwort beetle, Cionus scrophulariae, on flowers of Buddleja x weyerana ‘Sungold’.  Usually found on figwort, it also occurs on yellow and orange buddlejas, and these plants formerly belonged to the Scrophulariaceae.  Perhaps the beetles know something the taxonomists don’t.  A brimstone moth, Opisthograptis luteolata, on the lighted kitchen window.

The single flower on the globe thistle, Echinops ? bannaticus, in the northern border (it has been there for about 25 years) is very attractive to bumble bees, with often three on it at any one time, but the flowers are over quickly.

I have a bit of mint found in the Old Woodyard in Brede High Woods yesterday.  It looks a bit like pennyroyal, but I shall have to try and grow some on to get a conclusion.  It isn’t anything I am familiar with.

15 August 2016.  The vanessid have returned in small numbers with small tortoiseshell and red admiral around the buddleia.  I also saw a meadow brown and there was a gatekeeper visiting the orpine plants.

14 August 2016.  It remains very warm but, strangely, most of the vanessid butterflies so abundant yesterday seem to have disappeared and I only saw two rather sluggish red admirals resting on buddleia leaves.  Non-vanessid species seemed to be at about their normal level.  There was the hoverfly Rhingia campestris visiting flowers of orpine and Syritta pipiens on the mint I moved yesterday.  I caught a light brown apple-moth, the tortrix Epiphyas postvittana, on vegetation outside my study window.  Originally an Australian insect it has spread widely through England and Wales since it arrived in Cornwall in 1936.

On a dusk expedition around the house I netted a mother of pearl moth, Pleuroptya ruralis.

13 August 2016.  I moved the strawberry mint Mentha x piperata ‘Strawberry’ to the area opposite the kitchen window as it is in bloom and attracts some interesting insects.  I bought the plant last year at the Blackbrooks Garden Centre but there does not seem to be much strawberry in its smell.  Looking at pictures on the Internet there seem to be many shapes and sizes of mint called 'Strawberry'.  I caught a small hoverfly attracted to it later.  I also found a large number of very active pollen beetles and took a good set of photos of the butterflies on the buddleia.  Also a neat picture of Episyrphus balteatus, the marmalade fly, attracted to a flower head of orpine.

Queen bumble bees are quite abundant just now – feeding up for hibernation I suppose.

There was a meadow brown nectaring on the orpine flowers, the plant from Hurst lane.  It was there for around 2 hours and, I suspect, only departed when disturbed by a bumble bee.

For the first time since last year I went out with the sweep net and, among other things, caught a reduviid bug, the wandering thread-legged bug, Empicoris vagabundus in the hedge by the lane, a new species for me that feeds upon other small insects.  Another tiny (under 3mm) lace bug was Physatocheila dumetorum.  It seems to like lichen covered trees, especially Rosaceae, though where I found it is not noticeably lichenised.  I have found it in the garden before.

11 August 2016.  Muggy after a rather cool night.  The first flower has opened on the orpine (Hylotelephium telephium) from Horns Wood.  I also noted some jasmine flowers, white convolvulus (Calystegia) rapidly smothering the back of the house and the first ripe blackberries in the hedge by the lane.

Yesterday I saw a solitary wasp attacking a solitary bee in a flower of Geranium ‘Claridge Druce’.  I grabbed both plus flower; one stung me in the palm, but later I managed to identify the wasp as Cerceris rybyensis, the ornate tailed digger wasp.  This makes a burrow in the ground which it stocks with paralyzed solitary bees to feed its young.

A mining bee was discovered burrowing into a blue planter on my houseleek table.  I think it is Megachile versicolor from the orange pollen brushes underneath its abdomen.  I also got some photos of a carder bee on a marjoram flower.  Bombus pascuorum I think, but difficult to separate from B. muscorum with a specimen.
Posted by Patrick Roper at 4:56 pm No comments: 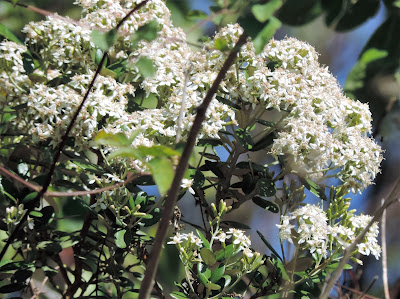 The other day I noticed a clump of off-white flowers thrusting itself up, like an aerial cauliflower, from somewhere at the overgrown rear of our old caravan.  I got as close as I could and concluded that it must be an Olearia, a daisy bush, and one of the many New Zealand plants I had acquired over the years.  It looked most like Olearia x haastii, a natural hybrid.  Searching my computer I found a diary entry for the plant and discovered I had bought it from a local nursery in 1981 and planted it at the back of this self-same caravan. Presumably it has been struggling through brambles and nettles for 35 years finally to emerge into the sunshine. 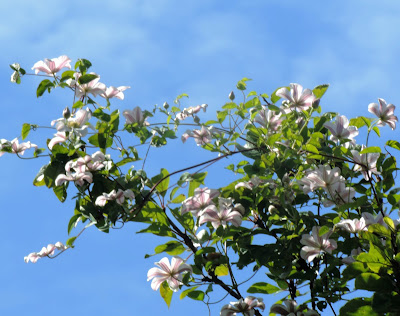 Whilst scrambling about at the rear of the caravan I spotted some clematis flowers high in an old damson tree here.  It turned out to be Clematis viticella 'Huldine'.  This may be a plant I bought as C. flammula at the same time as the Olearia above.  I certainly have no record or recollection of putting C. 'Huldine' anywhere else in the garden. 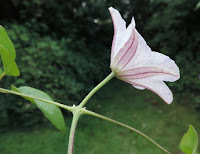 Posted by Patrick Roper at 10:14 pm No comments:

Garden delights continue.  Today on one of my circuits I met this splendid insect, a fine female hornet hoverfly, Volucella zonaria, sipping the nectar from a hogweed umbel.  A hundred years ago it was a great rarity, but now seems well-established in the southern parts of England and Wales. 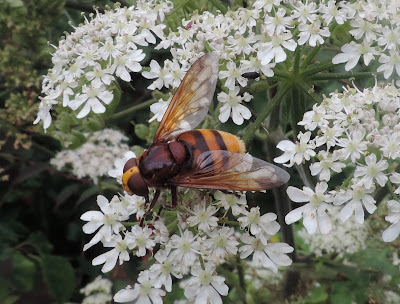 These splendid creatures breed in wasps and hornets nest and we have had the females come searching about indoors when their hosts are nesting in the attic, as they often do along with the tree bees..
Posted by Patrick Roper at 8:28 pm No comments:


Almost at the end of one of my circuits today, there was a papery rattle and a fine migrant hawker dragonfly (Aeshna mixta) land on the hedge beside me.  It stayed there long enough for me to go indoors and get a camera.  Isn't it remarkable how well such large and colourful insects blend into the background against jumbled vegetation? 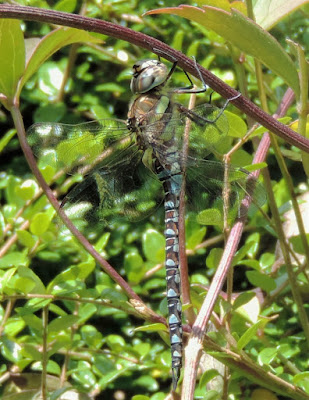 No sooner had I taken this shot when a large butterfly zoomed over my shoulder and landed on the hedge quite close to the dragonfly.  It was a silver-washed fritillary (Argynnis paphia), a woodland species that occasionally ventures into gardens in Churchland Lane, and is always a very welcome sight.  I tried to photograph it without lining up the camera properly and the below is all I managed before it took off again and sailed away over the hedge. 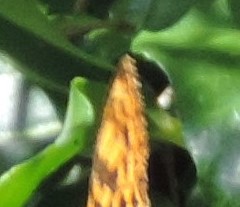 Posted by Patrick Roper at 11:44 pm No comments: