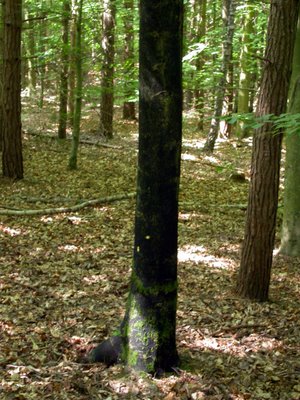 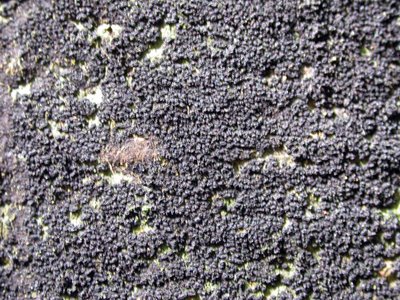 I have led a number of walks through Flatropers Wood reserve near Rye in East Sussex recently and several people have asked why the bark of one beech tree in a plantation of many trees is covered practically all over with a black, lichen-like encrustation and, indeed, what it is.

If it isn't a lichen, and I tend to think it isn't, I wondered if it might be some sort of alga or fungus. But whether alga or not, why does it only grow on one of the trees? The tree, by the way, is very much alive and appears to be in perfect health and the black encrustation is wholly superficial and quite easy to rub off.

Note: A week or so after publishing this I concluded that the black encrustation was the microfungus Ascodichaena rugosa.
Posted by Patrick Roper at 11:00 pm No comments: 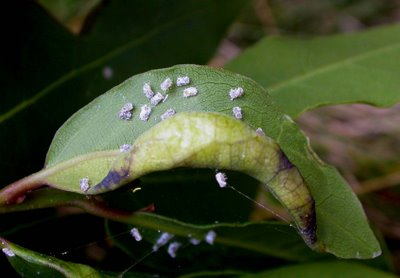 I found in Bexhill that the leaves of many bay trees, Laurus nobilis, were heavily infested with galls of the Psyllid plant hopper Trioza alacris.

I have often seen these galls on the bay trees that are, or used to be, so popular in suburban areas, but this is the first time I have seen the nymphs of the little creatures that cause them. They are covered with a grey, waxy material and a fluffy white extrusion.

This is an introduced species (as of course are bay trees) that has been spreading northwards in Britain.
Posted by Patrick Roper at 11:50 pm No comments: 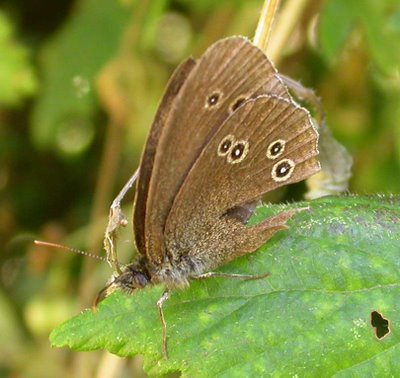 The ringlet butterfly, Aphantopus hyperantus, seems to be having a particularly good year here in East Sussex. I have seen it quite commonly in five or six different places.

The one in the photo was in the Brede Valley part of our village of Sedlescombe and it is a butterfly that prefers damper grassland.

Part of the reason why butterflies often have eyes on their wings is so that predators will attck these rather than the head proper. The photo shows that this works as the butterfly has lost a chunk out of its wings where the 'eyes' are situated.
Posted by Patrick Roper at 11:58 pm 7 comments: 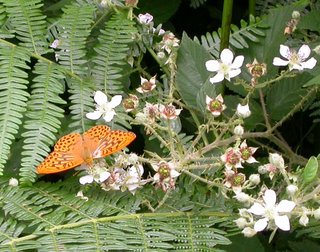 This year, 2006,is proving a very good one for some of our woodland butterflies such as the silver-washed fritillary, Argynnis paphia (above) and the white admiral, Limenitis camilla.

Both species are quite abundant in Bixley and the adjacent Flatropers Wood (see here) in Beckley and in Pond Wood, part of the Brede High Wood complex (see here).

Hopefully they will spread even further over the next few years. Part of the reason for their success is, I believe, that they are powerful fliers and can recolonise new areas fairly easily whereas the spring fritillaries, wood whites and other butterflies with less powerful flight are continuing to decline.

Posted by Patrick Roper at 11:56 pm No comments: 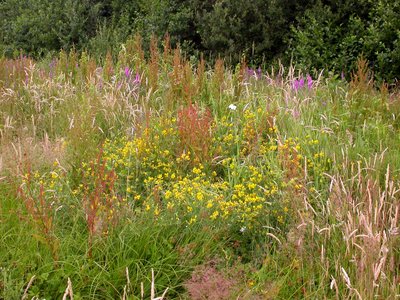 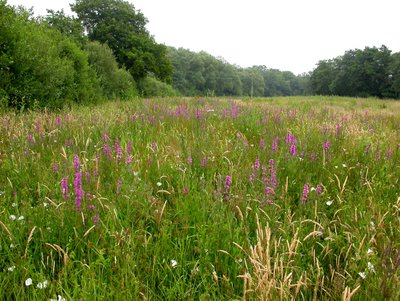 Yesterday I walked from the small village of Whatlington in East Sussex along the footpath that follows the tiny river Line to the east. About half a mile from the village there is the most astonishingly splendid wet meadow, though fairly dry after the recent summer heats. There is such a riot of colour here that it looks more like a large herbaceous border than a field. The purple loosestrife, Lythrum salicaria, is magnificently abundant and there are masses of perennial sow-thistles, meadow vetchling, hogweed and other summer flowers with plenty of bird and insect life.

This field is really unclassifiable and I have never seen anywhere quite like it. I suspect it has simply been abandoned in the sense that it is no longer grazed or cut (apart from the path) and the rising scrub indicates that it will be woodland in a few years time unless managed as rough grass. Like the bomb sites in post World War II London, transitional habitats often have an astonishingly rich biodiversity, but only for a short while. In the case of the Line valley (and many other places) it would be good if areas could be allowed to get to closed canopy woodland, then cleared back, even ploughed, so that the whole process of succession could start again. The different habitat phases would not be in the same places for long but, over a given area, there would always be some areas at the bare earth stage and some at the closed canopy stage and everything in between.

This field is at TQ766180 and there is full public access via the footpath. Parking is not easy in Whatlington village, but there is a small lay-by on the main road by the church. Follow the river bank eastwards from the village hall and cross left over the first bridge you come to, then turn right and follow the path to the meadow. A bonus before you reach the meadow is the quantities of beautiful demoiselle damselflies flitting about the brambles. If you feel like it you can walk right through to the A21, but I could stop in a meadow such as the one described for ever.
Posted by Patrick Roper at 8:28 pm No comments: