The other day I found a caterpillar of a campion moth (Hadena rivularis) nestling comfortably in the opened seed pod of, guess what, a red campion (Silene dioica).

I kept if for a day or two so that I could get a photo of it stretched out. 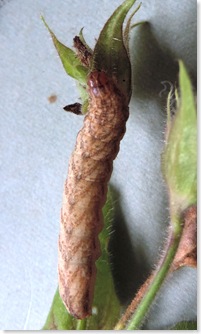 After our studio session had finished I gathered some fresh campion leaves and pods and the caterpillar immediately 'got its head down' as they say (see below).  It is now, of course, too big to fit completely into the pods as it did when I first found it. 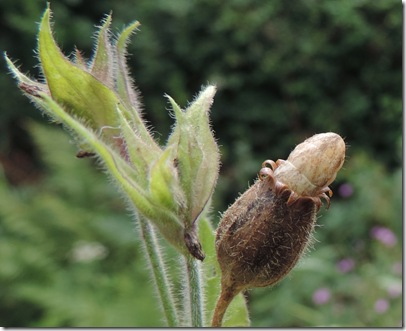 Moths seem to be even scarcer this year than before.  In a wonderful, still, heatwave dusk I walked round the garden and saw no moths at all.  It is now rare to find them on our windows after dark whereas 30 or 40 years ago one could expect to see a great variety of species here.

As well as moths, many other insects seem to be down in number.  Our first hogweeds are out, but are hardly jostling with species as they used to be and honey bees are very few, though the recently arrived in Britain Bombus hypnorum, the tree bee, has had a good season and must have done much of the pollinating that is usually the province of the honey bee.

One of the few moths I have seen round the house is the small dusty wave (Idaea seriata), kindly identified by one of the experts on iSpot. 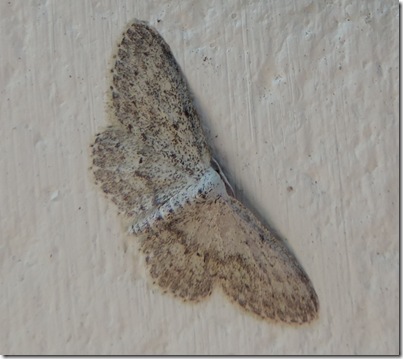 While yesterday a spotted a micro under a leaf (difficult to photograph) that turned out to be the Oecophorid Esperia oliviella. 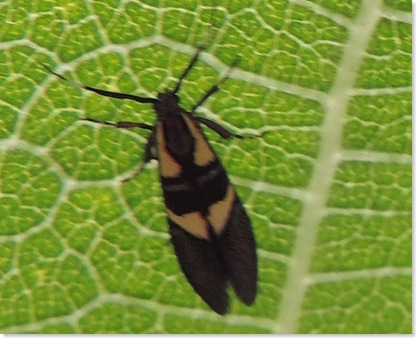 Often caterpillars seem easier to find than adults.  On the corner by the lane there is a hogweed almost completely eaten to pieces by larvae of the parsnip moth (Depressaria pastinacella).  They seem almost to have created their own problems by being too many for the food supply. 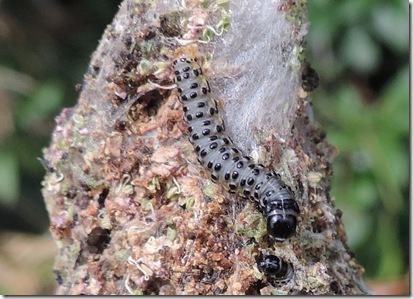 Moths may be doing poorly, but butterflies seem to be managing quite well.  Meadow browns are abundant and I have seen virtually all the species I would have expected to see by this time of the year.

For the last week or two our local hedgerows have been at their best.  With, in places, masses of wild roses, honeysuckle and elder much now giving way to bramble flowers. 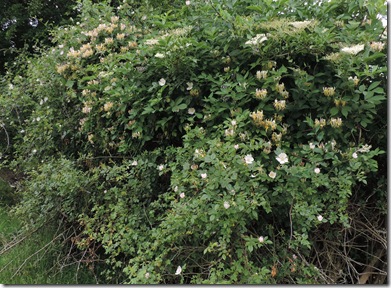 Summer flowers and grasses flourish along the hedge bottoms.  One of the most characteristic grasses is false oat-grass (Arrhenatherum elatius) with its elegantly arching silvery flowering spikes. 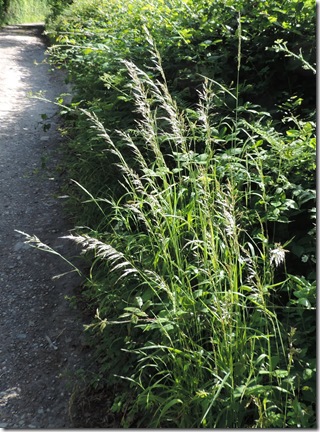 Another silver surprise was a blackthorn (below) with silver leaves rather than the normal green as on the right of the picture.  This is, I believe, a condition known as 'false silver-leaf'.  Leaves also turn silver if the shrub is attacked by a fungus Chondrostereum purpureum but this kills the plant or the affected branches and this particular blackthorn seems perfectly healthy (although the false silver-leaf is caused by one kind of stress of another). 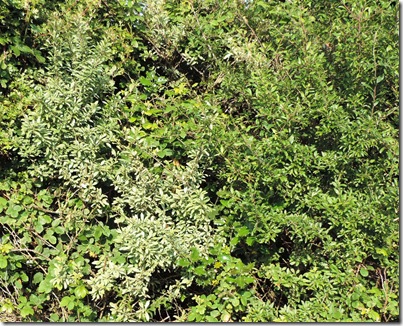 Hedge woundwort also seems to be doing well this year. 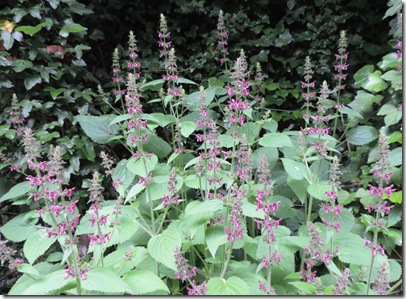 Anne Pratt (1852) remarks on the wooly properties of the plant and adds "one species of wild bee, which dwells in the cavities of trees, is skilled in using it.  Kirby and Spence remark of this little creature, that it knew what materials would slowly conduct heat, long before Count Rumford's experiments had been made; and it attacks the leaves of Wooly Woundwort (Stachys lanata), the Rose Campion and similar plants, and scraping hence the down with its forelegs, rolls it into a little ball, and sticking it on the plaister which covers the cells, renders them impervious to every change of temperature; so that, say these writers, 'this bee may be said to exercise the trade of a clothier.' "

The bee in question is the wool carder-bee (Anthidium manicatum) and is particularly common in our garden where it shows a strong liking for flowers of houseleeks (Sempervivum spp.) 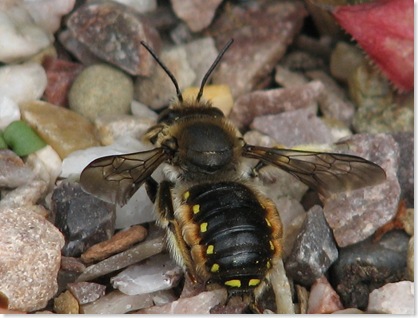 With us it mainly uses Stachys lanata to make its wool balls (see below). 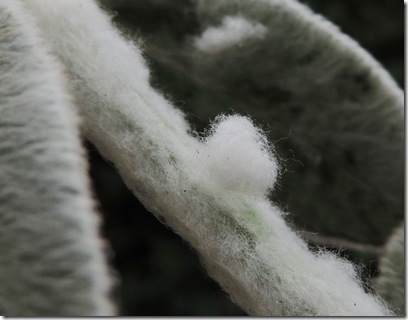 The Count Rumford mentioned by Anne Pratt was the 18th/19th C  Anglo-American polymath born Benjamin Thompson.  Among innumerable other things he investigated the insulating properties of various materials including fur, wool and feathers.  Kirby and Spence were authors of the Introduction to Entomology published in 4 volumes between 1815 and 1826.

Another insect that is a welcome visitor to our hedges this year is the small tortoiseshell butterfly (Aglais urticae).  It used to be one of the commonest species when I was young, but now seems to be rather rarely seen, though it may have been picking up a little recently.  I hope it isn't its relative scarcity that causes me to appreciate what a beautiful species it is. 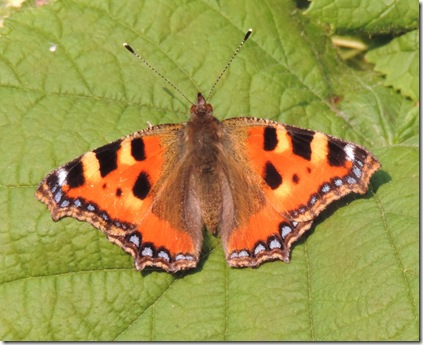 Posted by Patrick Roper at 6:02 pm No comments:

A light in the dark

Yesterday night I spotted a glowworm doing its stuff on the lawn in our garden. 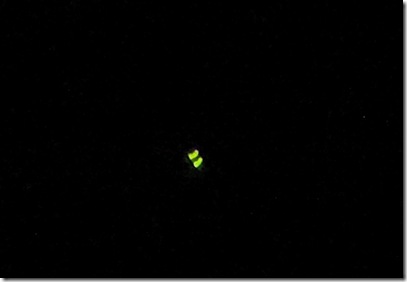 Posted by Patrick Roper at 3:35 pm No comments:

On my way home I noticed, in the woodland edge, a beautiful red filigree of herb robert (Geranium robertianum) leaves.  The plant had, I supposed, finished its flowering and was turning colour as a final flourish as the seeds set. 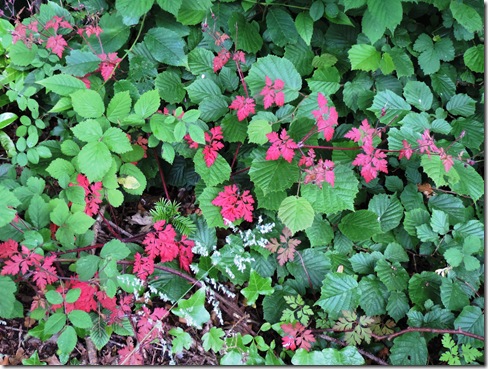 Back home I scrutinised the picture and discovered; not counting the grass and the dead oak leaf; field maple, ivy, hornbeam, bramble, yew, field rose, cherry laurel (an invasive alien) and hazel plus a couple of plants of whose identity I am uncertain, all sharing the moment.  A good example of how nature is both dynamic and intricate.

Along the same path the wood melick grass (Melica uniflora) has already gone to seed. 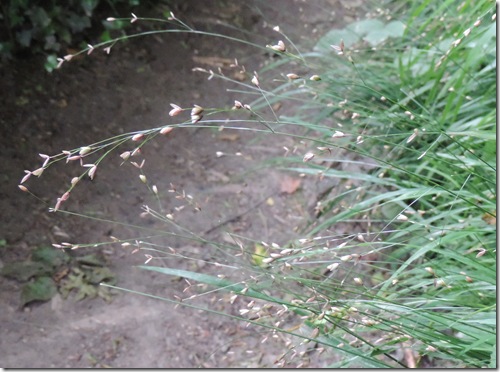 It is regarded as an ancient woodland indicator plant, though I always find it on the banks on the edges of the woods and, although it looks as though (like floating sweet grass) it might have harvestable seeds, I can find no evidence of any such use.  In the 1799 Letters and Papers on Agriculture, Planting &c, it is called 'wood honey-grass' and the anonymous author says of it This grass has beauty, and that only, to recommend it, unless to linnets, which are fond of the seed, which ripens in good time for them, being a very early grass.  It was said to occur at Prior Park, presumably the one near Bath designed by Alexander Pope and Capability Brown and probably still does since it is a common enough grass.

The linnet is one of the many birds that have declined alarmingly in recent times and they do need a good supply of seed year round so, as an early seeder, one can see how wood melick would have been sought by them.

Although we have not had much of a summer, the pond in Killingan Wood is already reduced to mud and remains a good, fish-free habitat for some of the wildlife that prefers temporary water bodies. 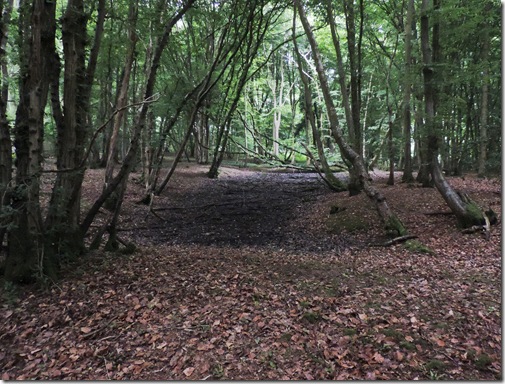 On bees and things

There has been much in the media recently on the decline of honey bees and the lack of insects generally in Britain.

This does seem borne out by my own experiences.  I have yet to see a honey bee in 2013, despite looking for them but two species of bumble bee have been doing well in our East Sussex garden

We have a nest of the tree bee, Bombus hypnorum, in the wall at the back of our house.  The plant that seems to exert a powerful attraction for them is the alder buck thorn, Frangula alnus, although it has tiny greenish, scentless flowers. 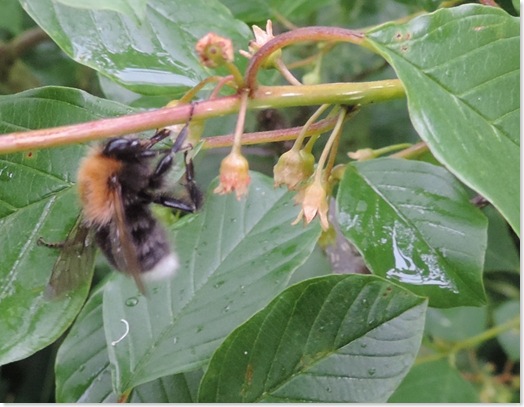 The whole of our bush trembles with them, but they do not seem very interested in larger, more colourful flowers.

The tree bee is a relatively new species in Britain.  Having first been recorded in Wiltshire in 2001, it has now spread far and wide and seems quite untroubled by whatever it is that is bothering the honey been and many other insects.

A self-sown and small flowered cotoneaster is another plant they like and on this they are joined in smaller numbers by the early bumble bee, Bombus pratorum. 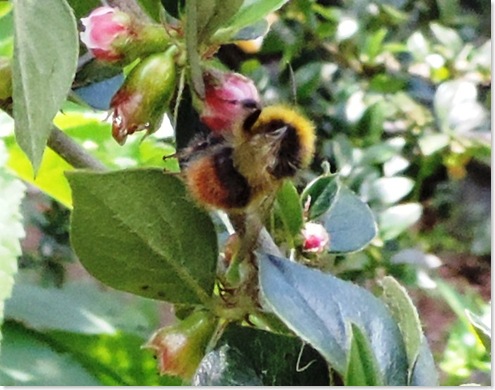 In the wider countryside there are some lovely flowering meadows like Jackson Pollock paintings. 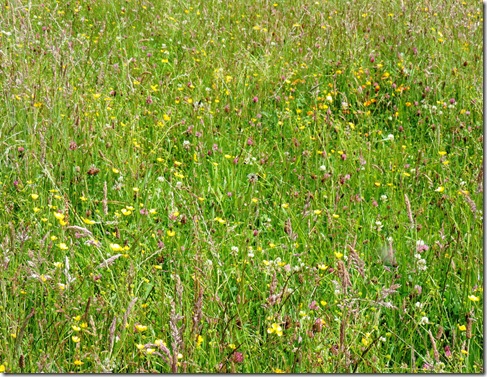 They do have insects in them, but not nearly so many as one would expect given the quantity of flowering plants.  In this afternoon's warmth I was looking at a patch of white clover, Trifolium repens, a flower normally very attractive to bees and other insects, but there was no sign of any visitors. 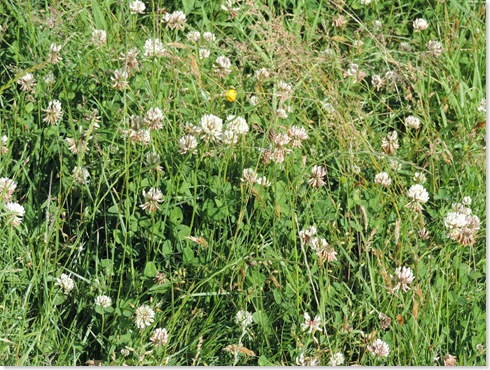 Butterflies generally are scarce, but I have seen most of the species I would expect to see during the year so far, albeit in much lower numbers than usual.  Meadow browns, Maniola jurtina, have just appeared and are usually common by now, but I only saw two this afternoon while walking through what appeared to be an ideal meadowland habitat. 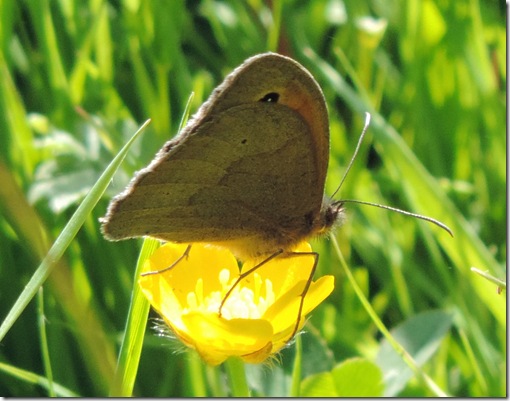 Posted by Patrick Roper at 11:11 pm No comments: