A walk to the church

Although it is generally a rather cold spring many plants are now growing quickly.  In the dark and damp recesses of the Killingan Wood stream there is a good selection of ferns including this soft shield fern (Polystichum setiferum).   the bobbles at the tips of the fronds are characteristic, but only last a short while. 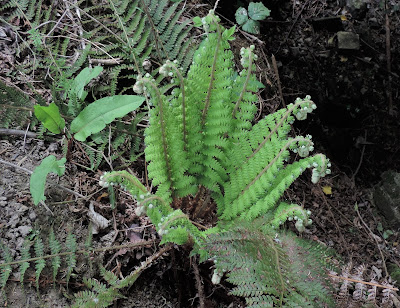 The hard shield-fern (Polystichum aculeatum) which also has tip bobbles, tends to form a rather flatter 'shuttlecock'.

In the churchyard I found five flowering spikes of  green winged orchids (Orchis morio) and it must be about fifty years ago when I first saw them here.  Their continued existence is rather precarious and dependent on who is doing the mowing but I think they should keep going. 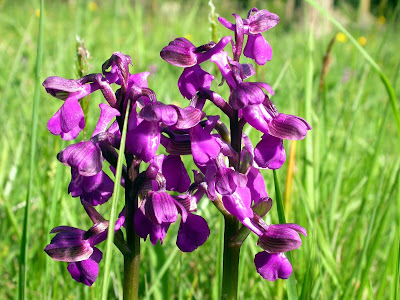 The busy road from the church to Hurst Lane is called Sandrock Hill (B2244) and has some interesting plants on its eastern side including abundant pignut (Conopodium majus) and yellow archangel (Lamium galeobdolon).  These are ancient woodland indicators and I wonder if the wooded bank alongside the road is an isolated strip of this.

In Hurst Lane I came across a shrub in the hedge the other day which runs down in Stace's New Flora of the British Isles as Tartarian honeysuckle (Lonicera tatarica) an introduced species from the Far East.  There are few Sussex records and this example, which must be quite old, was probably bird sown from a nearby garden. 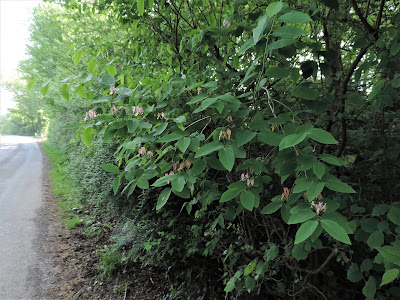 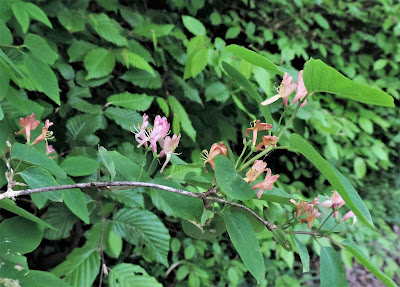 This shrub is similar to fly honeysuckle (Lonicera xylosteum) which usually has creamy white flowers and more oval leaves (I have an old plant in my garden - see below).  This was also probably introduced but has been long established at Amberley in West Sussex, with scattered records elsewhere. 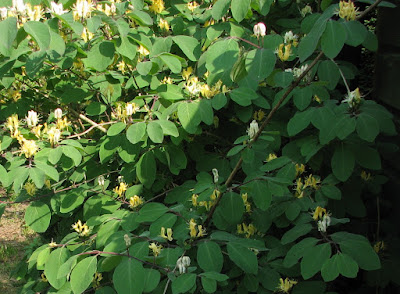 Posted by Patrick Roper at 1:35 pm No comments: