Yesterday evening a male winter moth (Operophtera brumata) was attracted to the light from our kitchen window pane. 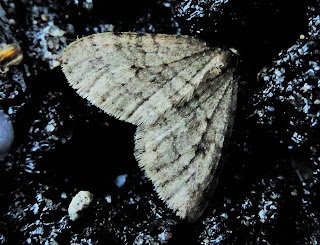 I know it is a male because the females are micropterous - almost wingless - and unable to fly.  In the past when I arrived home by car in winter I would often see dozens of males fluttering in the headlights along woodland lanes, but they do not seem to have been so common recently.

As a small boy, friends and I used to look for females of this species and mottled umber moths on the bases of tree trunks and in Canada I once saw several males similar to the winter moth fluttering round the base of a tree trunk where there were wingless females.

I used to wonder why some insects had this wingless female dimension.  Other examples are the vapourer moth and the autumn flying cranefly Tipula pagana.  The best explanation I have come across is by Malcolm Scoble in his book The Lepidoptera and I think it worth quoting at length:

Wing reduction is strongly related to environmental conditions.  Those few species where males are affected inhabit coastal habitats or small oceanic islands, areas where wind conditions are such as to prevent individuals flying directionally towards potential mates.  Jumping is a typical mode of progression in members of these species.  Wing reduction in females is strongly related to the degree of egg maturation at eclosion.  Well developed eggs leave little room for the flight muscles, which become reduced.  Reduction of flight muscles leads to flightlessness, a first stage in wing reduction,  Tympanal organs, which occur mainly at the base of the thorax or of the abdomen, also tend to become reduced or lost.  Females emerging from the pupa with well developed eggs have no need to sustain themselves while the eggs mature.  As long as males can find them, and provided eclosion occurs on a suitable foodplant, these females can lay their eggs rapidly.  Species exhibiting these characteristics are often active in the cold season (e.g. many Geometridae) where rapid oviposition, occurring before extreme conditions overtake individuals, is clearly advantageous.

In other words you can mate and lay all your eggs before you and your partner freeze to death and, since it is winter, you may be less likely to be eaten by a bird.