On the verge of the road called Gorselands in our village of Sedlescombe there is an astonishing colony of sweet violets (Viola odorata) with pale and dark colour forms. 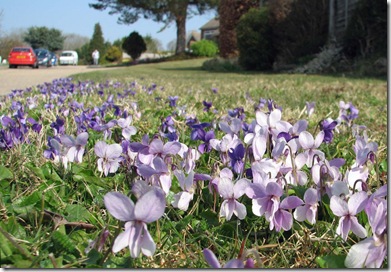 This is not a native of our area and I suspect the original plants were imported with turf, probably from the South Downs, used to make the verge.

We also get small colonies of V. odorata var. praecox which is I think always a garden escape here.  It flowers earlier than the nominate subspecies and has smaller, darker flowers.  Both types, of course, have that wonderful scent. 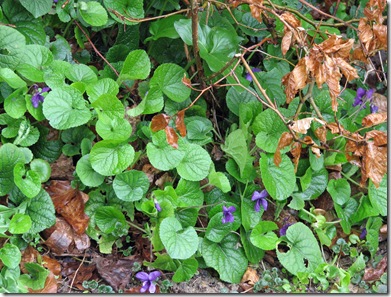 Posted by Patrick Roper at 8:36 pm No comments:

Our garden blackbirds are nesting now and I often see the female collecting bits of stick and grass for the nest.  The male tends to sit up in the bushes like this just keeping an eye on things. 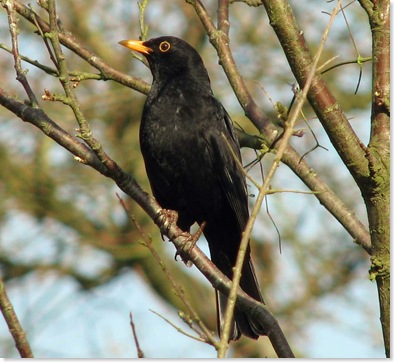 There is nearly always a pair of blackbirds active around the house and it is easy to think they are the same ones every year but, in the 35 years we have been here, there must have been many generations - sic transit gloria mundi.

Blackbirds usually stay in or near the same place all the year round but some go on longer haul journeys.  One famous bird travelled regularly some 228 miles from Norfolk to South Devon for the winter.  See: http://news.bbc.co.uk/1/hi/england/4353671.stm

Posted by Patrick Roper at 7:32 pm No comments:

I was recently presented with an old and large cormorant's nest from the Rye Harbour Nature Reserve.

Consisting of a large bundle of sticks decorated with a few strands of flotsam and carrying a rich complement of fish waste, guano and dead chicks, it came in a dustbin but has now been transferred to an Owen emergence trap. 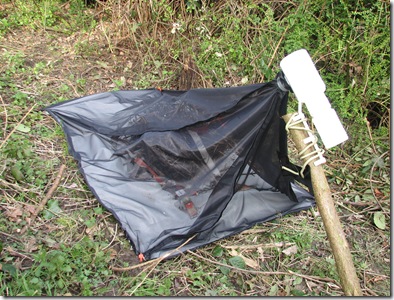 So far two insect species have emerged, both in some numbers.  One is the common overwintering greenbottle, Eudasyphora cyanella, and the other Siphunculina aenea, a tiny, rarely recorded red data book gout fly (Chloropidae) - see below. 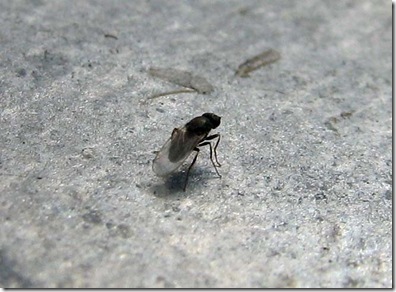 This species has been bred from bear's dung in the Orient, so it sounds as though it is not too fussy, though there has to be some reason why it is rare.

The scene below is a close up taken yesterday showing the fruiting bodies of a myxomycete, or slime mould, growing on the bark of a dead spinning gum (Eucalyptus perriniana) in our garden here in Sedlescombe, East Sussex.

It was originally a vertical picture (that is with the fruiting bodies sticking out sideways) which I have turned to horizontal.

I thought it looked remarkably like some African savanna dotted with bushy-topped trees.

Posted by Patrick Roper at 9:59 am No comments:

Scrambling along the south eastern gill in Yellowcoat Wood, near Flimwell, East Sussex (grid ref TQ 713303) this afternoon, I found some small, rusty brown objects erupting the the bark on the trunk of an old holly (Ilex aquifolium). 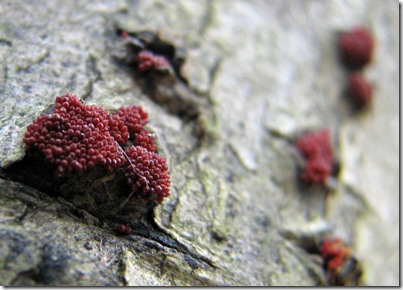 They were easily identifiable as Nectria punicea var. ilicis, a species for which I can find no other East Sussex records, though I suspect it is not uncommon.

Yellowcoat wood is, by the way, the reputed site of a medieval massacre.  In 1264 King Henry III on his way to the Battle of Lewes is said to have had 300 local archers beheaded there (it was then a field) in response to one of his retinue having been killed.

Posted by Patrick Roper at 8:03 pm No comments:

A few days ago I found, in the morning, a twin-spotted quaker moth (Orthosia munda) at rest on the white enamel front round the top of our kitchen cooker. 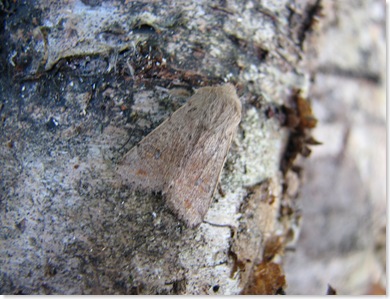 It had certainly not been there the previous evening and as no windows were open or lights on during the intervening period, I wondered how it had got in.

Orthosia species often play dead when disturbed and this makes them quite easy to photograph on any convenient bit of wood (as in the picture above).

This morning, to my surprise, I found a closely  related moth, the Hebrew character (Orthosia gothica) in almost exactly the 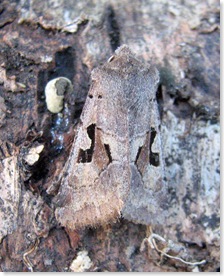 same place: on the white enamel at the top of our kitchen cooker.

Apart from the strangeness of their being there, I am surprised that they both decided to settle on a shiny white surface rather than on the numerous wooden surfaces about the house where they would be much better camouflaged.

Both moth species are common early flying creatures that come readily to light and to sallow blossom.