30 November 2017.  One of the highlights of the month was the discovery, the other day by our granddaughter when she was cutting the hedge here of the abandoned summer nest of a dormouse.  Summer nests are larger and looser than those used for hibernation and normally placed higher from the ground.  The hedge in question is only a couple of metres from our kitchen window and grows near a busy path and car parking area, so the dormice must be tolerant of a fair amount of disturbance, though we have known them in our garden and the general area for many years. 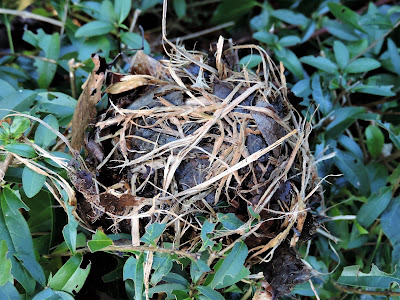 The nest was beautifully and characteristically constructed of dead leaves and honeysuckle bark, but was unusual inasmuch as most of the leaves were from the wild service tree that grows nearby and the bark was stripped from Wilson's honeysuckle (Lonicera nitida) which is major element in the hedge at this point (see November 13 below).  Interesting to reflect that this alien shrub which is so widespread as a hedging plant in gardens maybe helping to conserve dormice, a legally protected species on the edge of its range in Britain.

29 November 2017.  In Churchland Wood everything seems brown and grey in the bitter north wind which rattles dead leaves across the ground.  One spot of brightness is a couple of clumps of sulphur tuft fungi (Hypholoma fasciculare) a common poisonous species growing here at the base of an overstood sweet chestnut. 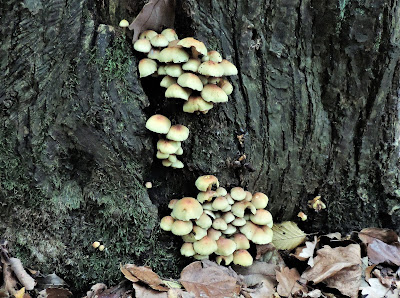 On the top and side of the root plate at the end of our garden I found some common smoothcap moss (Atrichum undulatum) also a common woodland species.  Also known as Catherine's moss, it was once in the genus Catharinea, a name apparently given in honour of Catherine the Great of Russia (but note the slightly different spelling).  Such a generic name may have been coined with an eye to smoothing the way to a research grant. 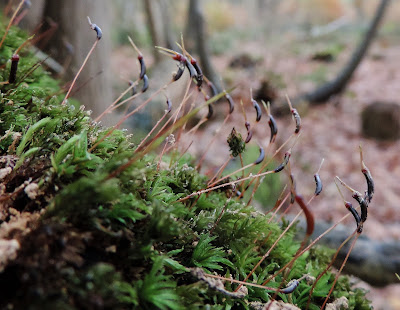 23 November 2017.  Killingan Wood is very quiet just now apart from the rustle of the deep layer of leaves as I walk through.  In one place there has been, for as long as I can remember, a hump in the path, maybe an old heap of earth that has settled to a smooth swell like the back of a whale. 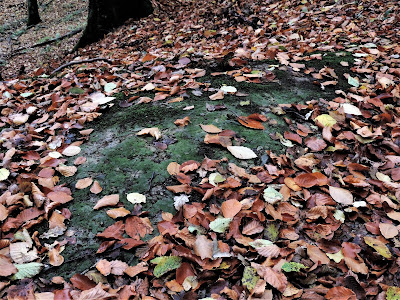 Various mosses grow around the edges but most of the surface is covered with a thin green patina which looks like an almost featureless slime under the microscope.  Maybe an alga, or the protonema, the earliest stage in the life cycle, of a moss or liverwort, but curious that it never seems to  to develop in any way.

Now that most of the leaves are down the evergreens are more obvious.  In Killingan we have ivy, holly, yew, one plant of spurge laurel (Daphne laureola) and, rather less welcome, an increasing number of cherry laurel bushes (below) sown from neighbouring gardens.  I sometimes think the wood will eventually be a species-poor mix of sycamore (another alien) with a cherry laurel understory. 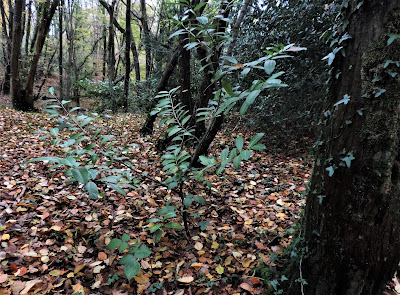 16 November 2017.  New mushrooms continue to appear on the piles of wood chipping in Churchland Wood.  Today I found two species I have not seen before.  The first is, I think, a developing hare's-foot inkcap (Coprinopsis lagopus) and I am still working on the second (maybe a Psathyrella). 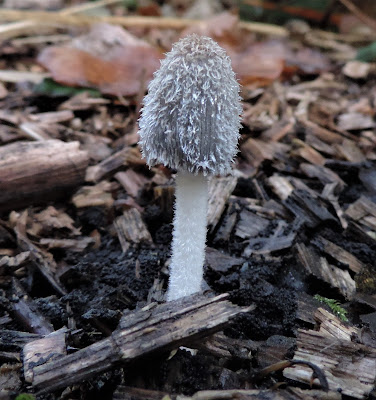 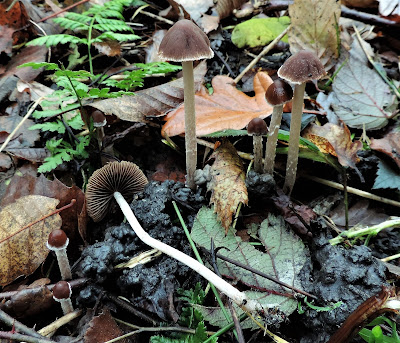 The woods are at their autumn best just now and most of the fungi are on the wood chip piles, here situated to the right of the foreground coppiced chestnut. 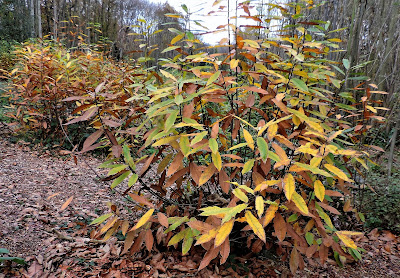 15 November 2017.  Along Jessmond Path I discovered two toadstools.  They must have been there for some time and I wondered why I had not noticed them before.  How much there must be that does not impinge on our consciousness.  One technique I use sometimes is to walk, say, 20 paces and then stop and have a really good look round.  Or to sit motionless in one place for as long as possible.  The longer one stays, the more will be seen.

Anyway, the toadstools in question are, I think, bluefoot boletes (Boletus cisalpinus), so named because if cut through the base of the stalk the flesh turns blueish.  They agree in every respect with the descriptions I have read, but one really needs to check the spores to be certain.  In the past they would have been identified as red-cracking boletes (Boletus chrysenteron) but this group has now been split into several species.  To add further to the confusion, both species have wandered in and out of the genera Boletus, Xerocomus and Xerocomellus.

The bits scattered round the bolete are the remains of sweet chestnuts eaten by squirrels or birds. 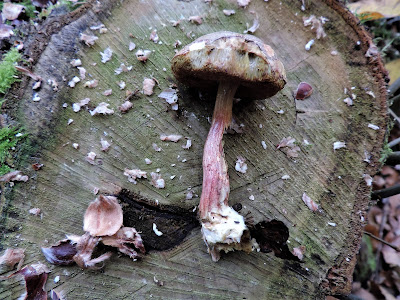 Despite the vernacular names, some authors say the bluefoot bolete has cracks on the skin of the cap (as below) whereas the red-cracking, rather paradoxically, does not.  Those who want the full story might visit this web site.  You have been warned! 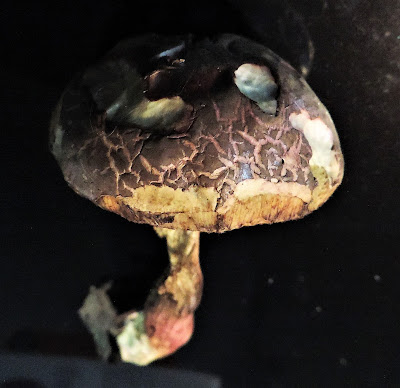 The story of this bolete continued the next day when, having tried to take a spore print, I discovered several small moth larvae under the cap.  I wondered if they might be the agaric clothes moth Morophaga choragella which used to be called Tinea or Scardia boleti (promising names), but the larvae are clearly not of this species although A. Maitland Emmet says Boletus is 'a larval pabulum'.  Fungus-feeding micro moth larvae are usually found on bracket fungi, so I have put the bolete cap into a breeding chamber to see if I can hatch any moths out.  As the picture below shows, many of the tiny caterpillars decided to leave the toadstool as soon as it was in the box. 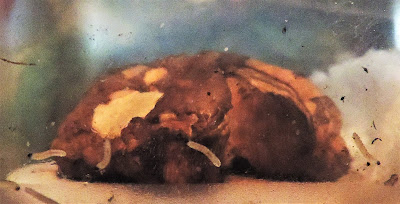 14 November 2017.  The laurustinus (Viburnum tinus) that seeded itself into our front hedge is flowering well this year and has both flowers and fruit from last year's flowers at the same time.  It is a Mediterranean shrub but seems to be doing well here, perhaps helped by climate change.  The berries are just about visible below and to the left of centre. 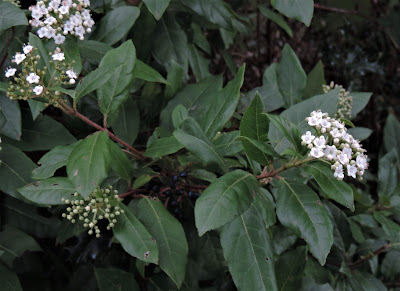 13 November 2017.  Our granddaughter was cutting the hedge today when she noticed a berry with a smaller one beside it.  It is the fruit of Wilson's honeysuckle, Lonicera nitida, a popular hedging shrub originally from China that often escapes into the wild here.  Our plants quite often have flowers, but we have not seen fruit before. 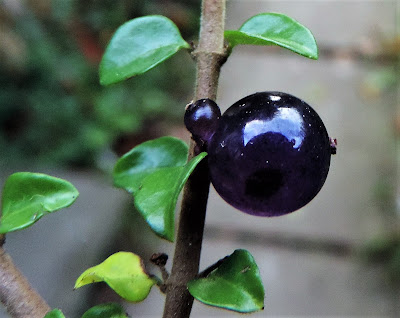 11 November 2017.  Along Columbine Path at the edge of Killingan Wood (TQ783192) I was looking for more galls on beech leaves and noticed some small tufts where branch veins joined the midrib on the underside of one leaf.  On the other side was a small bump, paler than the rest of the leaf.  These would appear to be the work of another gall mite, Monochetus sulcatus which I am sure will be quite widespread despite my being able to find any records. 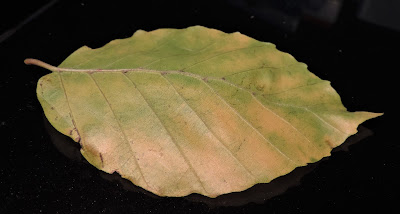 Another pleasure was seeing a grey squirrel scrambling up a tree trunk at Ariel Cottage maybe 50 metres from our house.  It is a long time since I saw one of these and they are, maybe, returning now my granddaughter has left with her cats.  I am somewhat of a heretic in liking grey squirrels.

10 November 2017.  Coming up through Churchland Wood today I found these old galls on a fallen beech leaf. 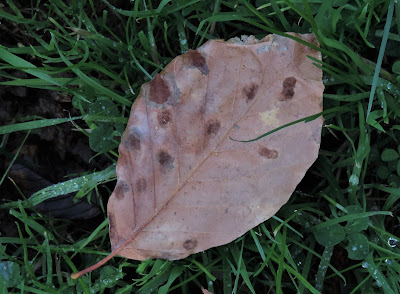 They are caused, initially on green leaves before they have fallen, by the gall mite Eriophyes nervisequus and consist of small pits between the veins on the underside of the leaf known as 'erinea' and containing a felty down in which the mites live.  This gall has also been called Aceria fagineus.

9 November 2017.   Today my granddaughter cleared away the medlar tree that had been blocking the way the my Square Metre Project (an incense cedar had fallen across it and squashed down some of the branches).  I report on this project in another blog: http://squaremetre1.blogspot.co.uk

2 November 2017.  There are two pastures near our home, one is currently grazed by cattle and the other by sheep.  All the droppings in the sheep field are attracting half a dozen of more yellow dung flies (see below) while those in the cow pasture seem completely bereft of insect life.  It is difficult to understand why this should be the case, but I will seek for explanations. 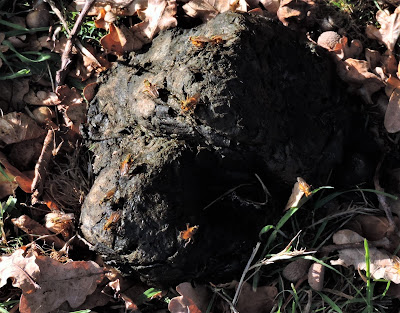 1 November 2017.  Autumn is beginning to reach its best.  Here is a view across Killingan Wood Brick Pit. 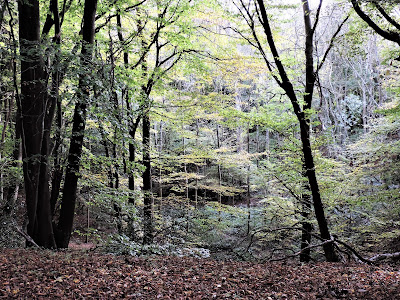 On the woodland bank on the other side of Churchland Lane I found a flourishing colony of fuchsia (Fuchsia magellanica) on a south facing bank in ancient Churchland Wood.  This native of Argentina and Chile is widespread as a garden escape in northern Britain and Ireland but seems rather less common in South East England. 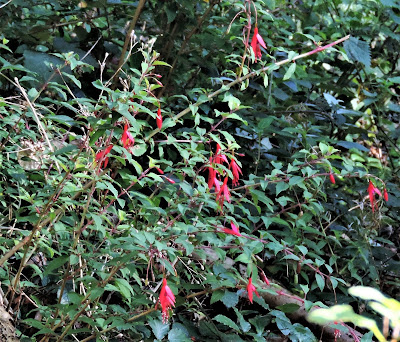 Another garden escape from that part of the world is Argentinian vervain, Verbena bonariensis, which, to my surprise, I found growing happily in a chestnut coppice in the same wood a couple of weeks ago.  One wonders if the success of these exotics has anything to do with climate change. 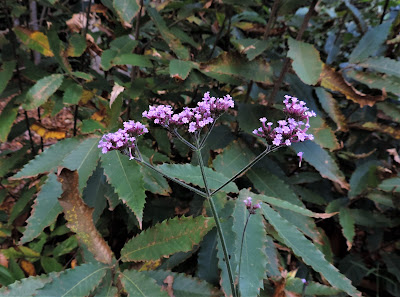 Posted by Patrick Roper at 5:06 pm No comments: