The weather was warmer today with the sun shining and no rain.  Heading down the garden I found that the spurge laurel (Daphne laureola) had opened some of its flowers.  The bush appeared here of its own accord and the next nearest example I know of is about 500 metres away in a wood and the plant seems nowhere common in this part of East Sussex. 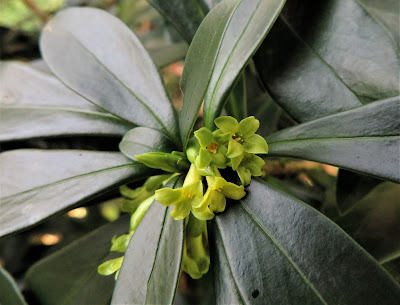 Further down the garden I found our bush of the winter flowering honeysuckle Lonicera x purpusii 'Winter Beauty' and was pleased to discover that the flowers were being attended by a couple of rather dark marmalade flies, Episyrphus balteatus. This very common hoverfly often appears here in the colder months and its presence on the honeysuckle again illustrates how important these winter flowering introductions can be to our native fauna.  Lonicera x purpusii is a hybrid between two Chinese species and I wonder what Chinese insects may be attracted to their flowers. 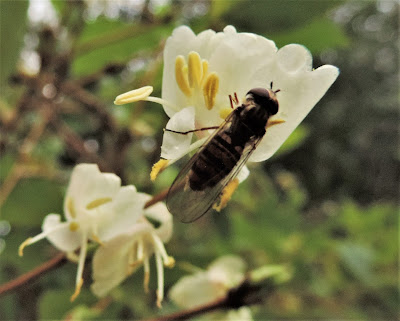 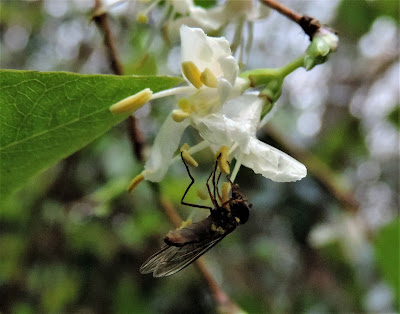 In Churchland Wood I photographed this single-stemmed hornbeam.  These trees are nearly always coppiced, but there are two or three that have been left to grow naturally in the wood and I often wonder why.  Maybe there was a use for larger pieces of the wood. 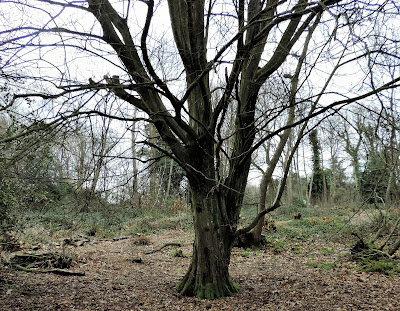 Underneath the trees the green leaves of bluebells are rising through the leaves as a reminder that spring is not far away.  Noise levels are increasing too with, today, several great tits calling loudly and a great spotted woodpecker drumming on an oak tree. 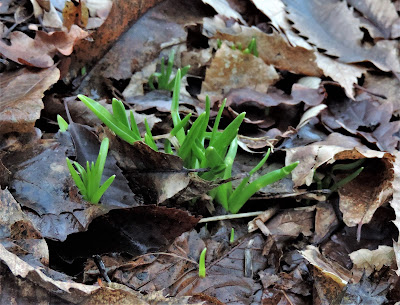 Posted by Patrick Roper at 8:18 pm No comments:

We have a witch hazel bush halfway down the garden making a fine show with its bright yellow, sweetly scented flowers contrasting with the cold and damp. 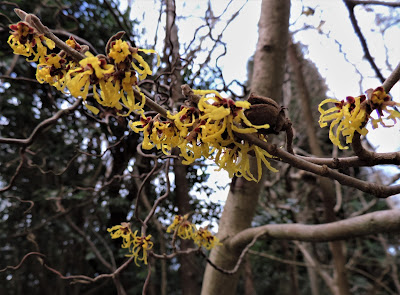 In 1993 I wrote a note (about the same garden) for the Entomologist's Record: Nocturnal invertebrates visiting flowers of Witch Hazels, Hamamelis mollis pallida and Hamamelis japonica cultivars, in January and I have posted an edited version here:

On 20th January 1993 I walked around our garden with a torch and inspected our Wintersweet, Chimonanthus fragrans and Witch Hazel, Hamamelis mollis pallida bushes both of which were in full bloom with their sweetly scented, pale flowers.

I found nothing on the Wintersweet, but the Witch Hazel had a variety of Diptera (two-winged flies) on the flowers. There was the mosquito Culiseta annulata quite clearly feeding; two species of fruit fly (Drosophilidae), Parascaptomyza pallida and Drosophila subobscura, the latter the more common of the two; an Anthomyiid and the Common Yellow Dung-fly, Scathophaga stercoraria.  Culiseta annulata, with its distinctive white-banded legs, in one of our commonest mosquitoes and is often found in winter in outhouses or caves.  Parascaptomyza pallida is also an extremely common fly that seems to be about in most months of the year.

The centre part of the Witch Hazel flower seems to be constructed for insect pollination and is relatively flat and open allowing easy access to the nectaries by short-tongued species. The pollen is sticky and, in the flowers I examined closely, had been successfully transferred from anthers to styles. Most of our Witch Hazels usually set a good quantity of viable seed and it would appear that they are adapted to pollination by nocturnal invertebrates. On day-time visits I have found only Sepsis fulgens and two non-biting midges, Smittia aterrima and Limnophyes prolongatus. The last two were, I suspect, simply sheltering in the bushes rather than feeding on nectar. 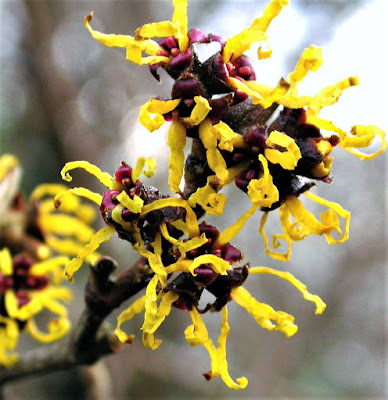 Posted by Patrick Roper at 5:23 pm No comments:

In my post on January 11th I posted a picture of a resupinate orange crust fungus.  I think this was probably Stereum hirsutum.

Today I found a much more luxuriant colony of what I think is probably the same species in Killingan Wood (TQ783192).  There is much fallen wood in this area, but only one - a large ash branch - carries such a display of fruiting bodies. 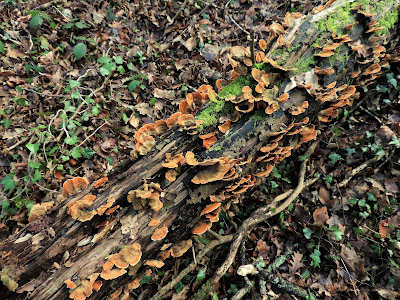 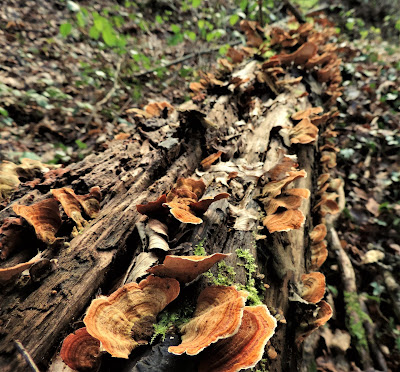 Posted by Patrick Roper at 7:31 pm No comments:

On a wind chill walk today I found the first expanded hazel catkins: always a sign to me that the wildlife season has started (though it never really finishes of course).  Soon the hedges will be thick with these catkins shedding their pale yellow pollen. 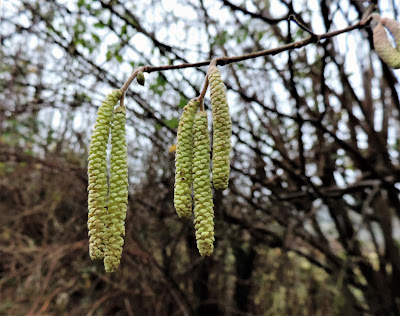 Also on hazel, this time on dead, usually standing, trunks is the common and widespread ascomycete fungus known as hazel woodwart (Hypoxylon fuscum). 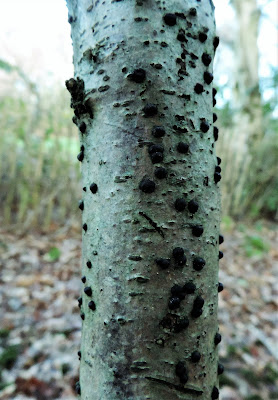 In the very sheltered Killingan Wood brick pit I found precocious flowers on a primrose and beside it on the wet leaves a dead male mottled umber moth (Erannis defoliaria) a winter-flying species whose season is nearly over.  It used to be very common when I was young, but is thought to have declined in recent years.  Like the winter moth, the females have very reduced wings useless for flight. 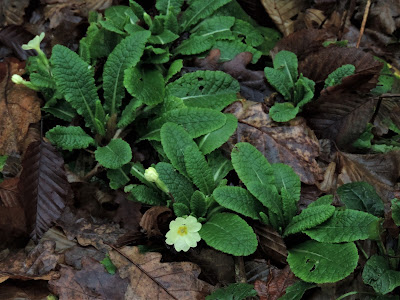 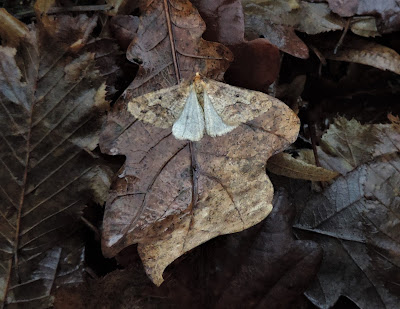 Posted by Patrick Roper at 7:27 pm No comments:

Although the countryside is bleak grey-green washed by a cold winter wind, there are still moments of brightness.  One of the best is the flowers on the gorse hedge that runs across Churchland Fields.  In warmer weather these scented golden blossoms attract bees and other insects, but it is too cold for any to be on the wing at the moment. 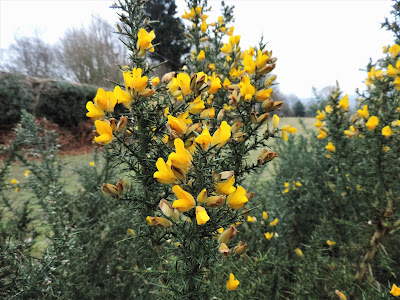 There are a few splashes of colour provided by fungi like this resupinate Stereum species on a a chestnut trunk that was cut down last March. 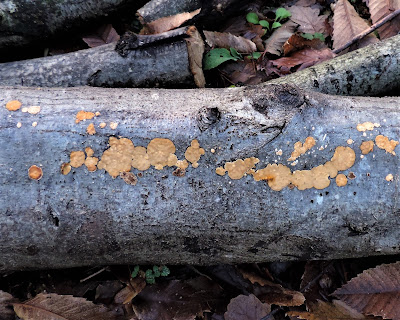 Or purple jellydisc (Ascocoryne sarcoides) growing here on a dead, but upright hornbeam trunk in Killingan Wood.  This was kindly identified by Nick Aplin via the Sussex Fungi Group 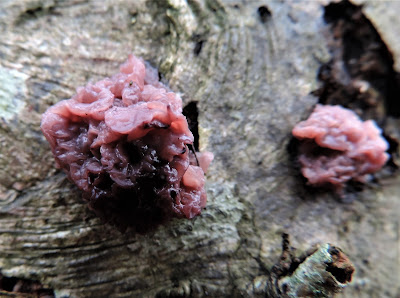 .
On the fauna side, one of our daughters spotted a well-camouflaged green caterpillar on a fern leaf that was pressed against our kitchen window pane.  The nearest look-alike I can find is the larva of the copper underwing (Amphipyra pyramidea).  There appears to be some feeding damage on the pinnae of the fern but the copper underwing should be a pupa at this time of year.  One fern-feeding noctuid is the small angle shades (Euplexia lucipara), but it isn't that.  It seems to enjoy its place between glass and frond, so I will leaves it to see what happens. 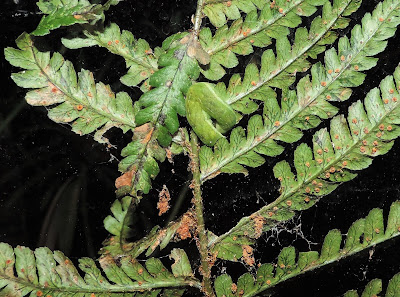 We seem to be experiencing a minor population explosion of what I think is the amphipod landhopper Arcitalitrus dorrieni.  This is a native of forests in New South Wales, Australia, but has become widespread here.  It occurs frequently in gardens and the pair of dead ones illustrated here were found on our sitting room floor - the first time we have seen the creatures indoors.  In life they are normally darker coloured than this. 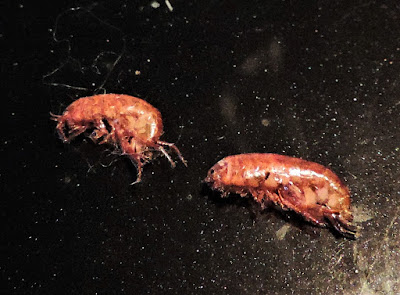 Posted by Patrick Roper at 7:46 pm No comments: