I have, this year, grown some crimson-flowered nasturtiums in a pot and, needless to say, the white butterflies soon found them.  Before long both large white (Pieris brassicae) and small white (Pieris rapae) caterpillars appeared, the large whites (below) being particularly obvious on the leaves and flowers. 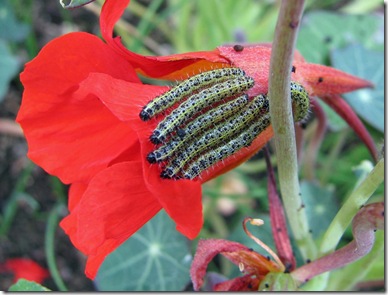 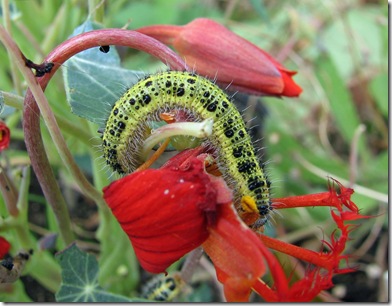 This morning nearly all these caterpillars had disappeared and a couple of wasps were spotted searching the plants for more.  By the evening all I could find was a solitary small white (below) that had survived, perhaps, because of its more cryptic colouring. 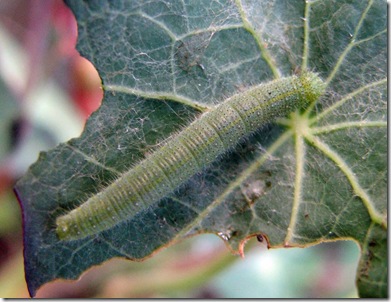 Caterpillars of the white butterfly family, the Pieridae, store toxic chemicals derived from their foodplants within their bodies making them distasteful to some of their predators, mainly birds.  That is why the large white larvae feel safe to feed openly on the foodplants and have a black and yellow pattern of colour that acts as an " I taste nasty" warning.

While it may offer some protection against birds it does not stop the wasps and various other creatures that eat large white and other caterpillars, indeed the bright colour may even help them find their prey.

Since wasps and large whites have probably been around together for thousands of years, it makes one wonder about the survival of the fittest dictum.  Constant removal by wasps does not seem to have resulted in better adapted caterpillars, yet somehow they evolved to their current colour and shape.

The last laugh, perhaps, will go to the nasturtiums who have survived the onslaught and have plenty of summer time left to set seed.

Posted by Patrick Roper at 12:46 am No comments:

This year seems to be a good one for crickets.  This afternoon I found this female speckled bush cricket (Leptophyes punctatissima) on a leaf of our nasturtiums.  (Much better than Mr Pooter finding a brick in the middle bed of geraniums). 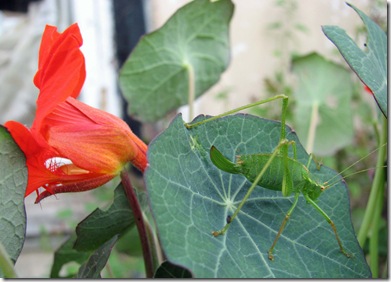 I wondered if it might be eating the burgeoning population of large white caterpillars, but apparently they are wholly vegetarian.

It is remarkable how difficult it is to see such a large insect.

Posted by Patrick Roper at 9:59 pm No comments: