On inspecting some rose hips growing over our garden shed, I was pleased to discover that the plant is a small-flowered sweetbriar (Rosa micrantha) rather than the common dog rose.  Note the small, white glands on the hips and elsewhere  It is a much more straggling plant than the normal sweet briar (Rosa rubiginosa) - there is a good coloured illustration of three of the sweet briar species here: https://www.delta-intkey.com/angio/images/ebo04681.jpg

It is the main wild rose in part of Brede High Woods a mile or so away and the plants scent the air with an apple-like fragrance after rain. 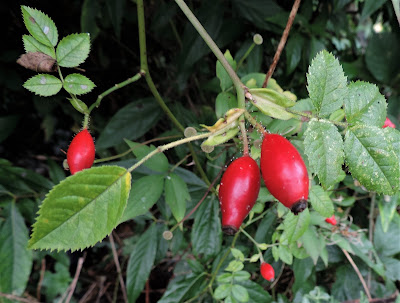 Another pleasant surprise was the discovery of a baby wild service tree (Sorbus torminalis) at the end of the garden.  It looks like a seedling, but I suspect it is a sucker shoot from trees that grow a few metres away to the west.  The separate leaflets on some of the leaves is a variation that occurs occasionally in wild service trees and will not necessarily persist as the tree matures.  It shows the affinity with the rowan (Sorbus aucuparia) which, of course, has all the leaflets separated. 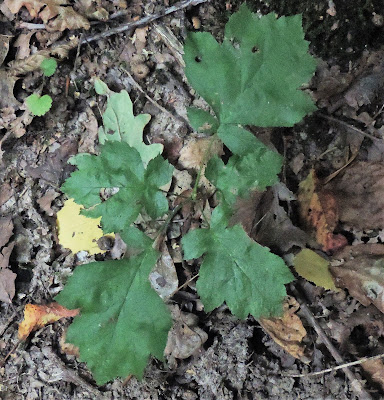 In Killingan Wood up the lane, there is a small group of Crataegus x media, the hybrid between common hawthorn (Crataegus monogyna) and the Midland hawthorn (C. laevigata).  The shrubs have a distinctive leaf shape, halfway between that of the parents and the fruits vary between having one or two styles.  The C. monogyna is common locally, but I have not come across the other parent C. laevigata here. 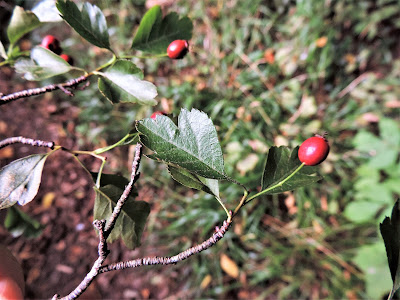 We have several self-sown Cotoneaster spp. in the garden and the one below is, I think, C. simonsii, but it is a difficult genus with many species grown in gardens and very ready to hybridise. 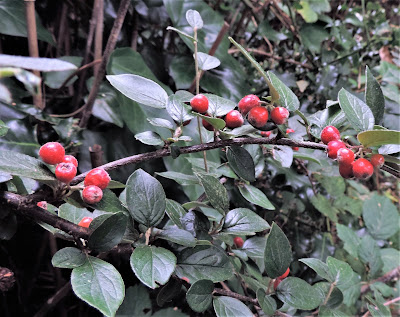 At the end of the warmer months a plant of wild marjoram (Origanum vulgare) still has plenty of flowers and is a welcome port of call for the hoverfly Helophilus pendulus, sometimes known as 'the footballer' because of the stripes on the thorax.  The early stages occur in all kinds of water bodies from lakes to muddy puddles and marshy areas.  Sometimes the larvae are found in cow dung too. 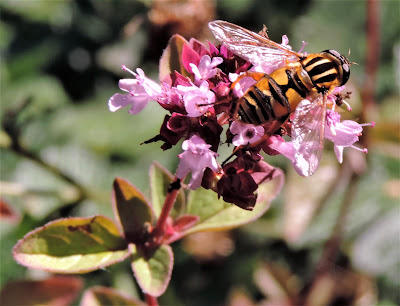 Posted by Patrick Roper at 6:00 pm No comments:

This season was a brilliant one for the ivy bee, Colletes hederae and I think it is now the most abundant bee in our garden.  Strange for a relatively new arrival in this country with a rather specialised habitat - it visits almost entirely ivy flowers. 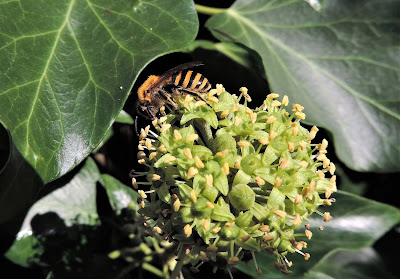 Plants of the great mullein often pop up in the garden.  This year one has been heavily colonised by the larvae of the leaf mining fly (Agromyzidae) Amauromyza verbasci.  The mines show as pale patches. 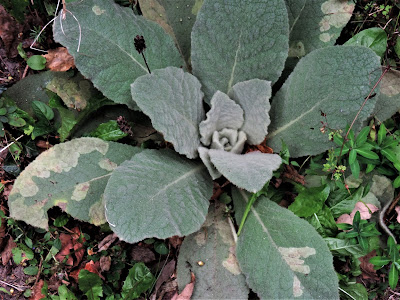 As usual a dark bush cricket, Pholidoptera griseoaptera, decided it would be better to live indoors now the colder weather was arriving.  These crickets wander about in the garden and sometimes one or two come indoors where they prowl around the siting room for a few weeks before disappearing into the silent warmth of death.  That in the picture below is our female visitor with her sword-like ovipositor at the rea 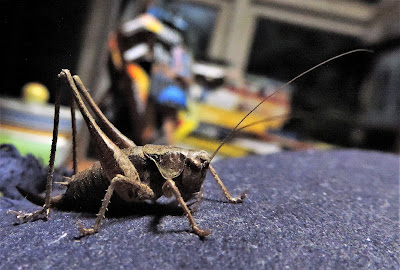 Other insects enjoying the last warmth of the year included several dragonfly species, such as the one below.  It is a common darter, Sympetrum striolatum, very well camouflaged as it perches on dead bracken fronds, using them both as a lookout post and a basking opportunity in the late sun. 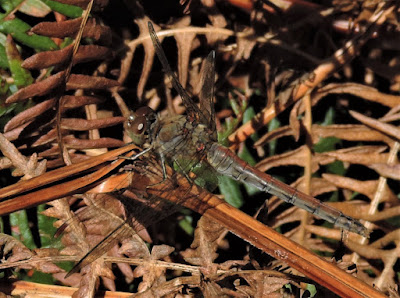 There have been late butterflies too.  Mostly red admirals on the Michaelmas daisies but also the occasional speckled wood and, in a neighbour's garden a small copper on a stunted knapweed.  Whether by mowing or grazing, the flowering of knapweeds and other plants can be extended over a longer season than if they are in a meadow cut for hay. 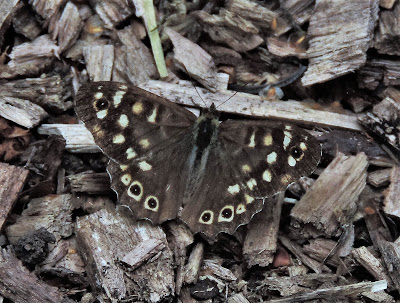 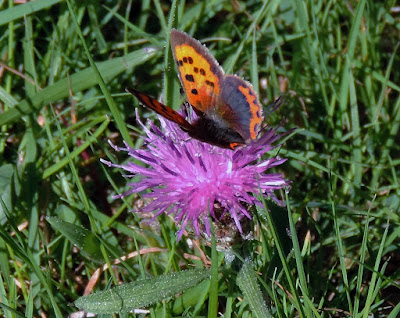 Posted by Patrick Roper at 1:40 am No comments:

The fungus season has started with the usual crop of species that are often hard to identify.  One of the first, found on wood chip in our garden, is shown in the picture below. 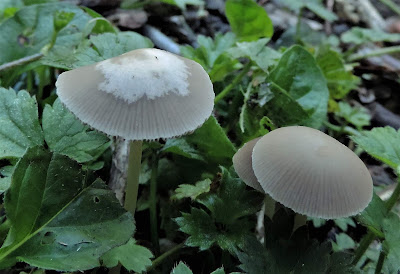 Nick Aplin of the Sussex Fungus Group thinks it is probably a Psathyrella species.  This discussion group is very useful on the mycological front:  http://sussexfungusgroup.co.uk/  Trouble is things cannot always be identified from pictures or without detailed microscopic examination of the spores and other structures.

The next one I feel reasonably confident about: dead mens' fingers, Xylaria polymorpha.  These are growing through the moss on a fallen log in Killingan Wood where there are still very few ground fungi compared with former years. 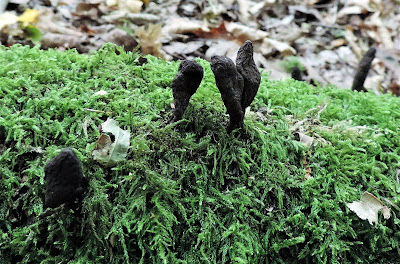 Also in Killingan Wood (TQ7819) was a cluster of toadstools (below) at the base of a coppiced oak.  The Sussex Fungus Group people reckon it is the spindle toughshank, Gymnopus fusipes (= Collybia fusipes),  'Fusipes' means 'spindle-shaped' and the photo below shows a stem that is widest in the middle.  One author writes "The distinctive shape of the stem makes it almost impossible to confuse this species with any of the other common woodland mushrooms." Spindle toughshank is parasitic or saprobic mainly on oak and can cause the death of trees, though it usually favours already weakened or unhealthy specimens. It is a species that favours drier woodlands and is said to be increasing. 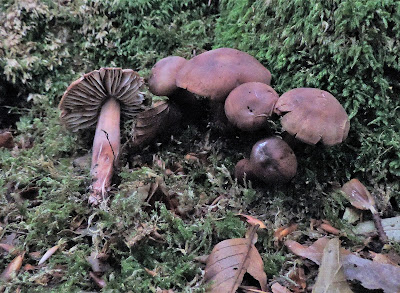 Back to the woodchip.  Theis one below is, I think, hare's-foot inkcap, Coprinosus lagopus, growing on woodchip, a habitat it prefers.  These toadstools are very ephemeral, dissolving into spore-filled liquid almost as soon as they have appeared. 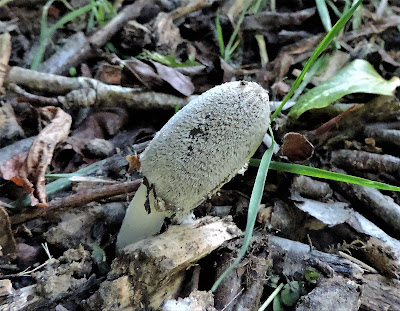 In Churchland Wood there is a good showing, as in most years, of  yellow brittle cap, Russula ochroleuca, a common species found in both broadleaf and coniferous woodlands and which usually does well here. 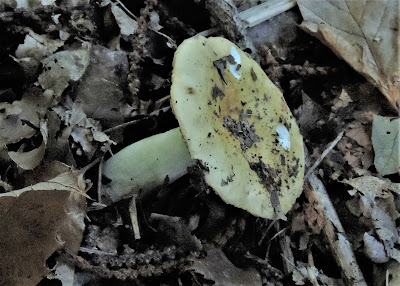 I also found a number of interesting microfungi in September.  One that was new to me was a dematiaceous anamorphic fungus (sic) that forms these reticulated patches on elder leaves. I have identified it as Cercospora depazeoides. If you look very carefully, you will see little black dots in the 'islands' which are the spore-bearing bodies. 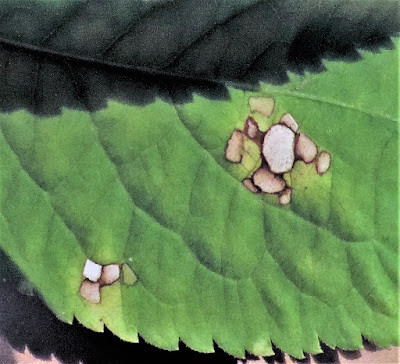 In Killingan Wood there is a young ash tree infected with a bacterial canker (not a fungus) that rejoices in the name of Pseudomonas syringae ssp. savastanoi pv. fraxini (pv is short for 'pathovar', a bacterial strain).  Although unsightly to all but a bacteriologist, these deformities seldom kill the tree unless they ring the trunk.  They do not seem to spread much either and I am only aware of two or three infected trees in our area. 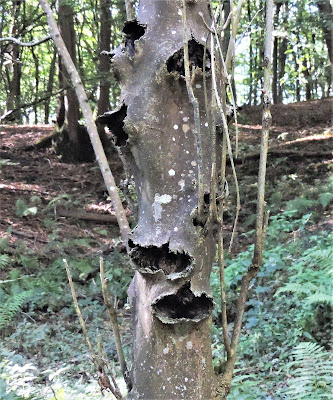 Posted by Patrick Roper at 2:37 pm No comments: