One of the most striking plants in late autumn and winter is Italian lords-and-ladies (Arum italicum) whose leaves appear in October or November whereas the commoner lords-and-ladies or cuckoopint (Arum maculatum) do not appear from the ground until late winter, January of February.

In our garden we have two subspecies of A. italicum: subsp. italicum and subsp. neglectum.  The latter plant is a native from West Sussex westwards, usually close to the coast, while the nominate subspecies is a garden plant that has escaped into the wild quite widely.  It has very distinctive leaves marked with white along the veins (sometimes described with the longer name Arum italicum subsp. italicum 'Marmoratum') whereas the veins in subsp. neglectum are far less of obvious.

The native species does not grow wild in our area so far as I know but A. italicum italicum occurs in a number of woods and hedges locally (some may be hybrids between the two subspecies).  Some of these are a long way from the nearest gardens and may be bird sown.  The plant depicted below appeared of its own accord on the shady side of a hedge in our garden and is steadily increasing in extent.

The second picture is of native subsp. neglectum and the third of common lords-and-ladies photographed in February in an earlier year.  The italicum were photographed earlier today and the leaves have been up for some weeks. 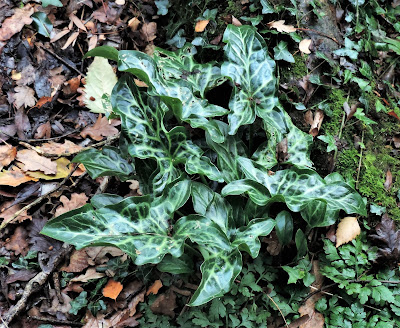 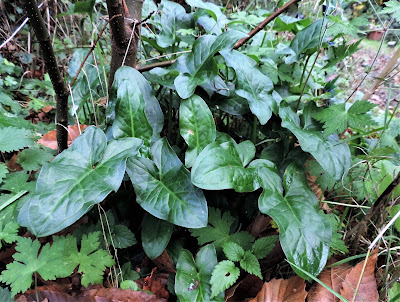 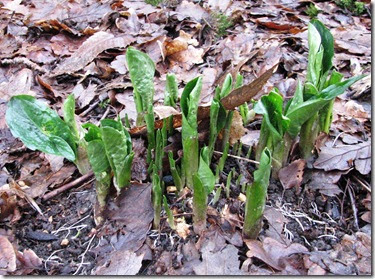 Refreshing my data on lords-and-ladies sent me to the bookshelf for Cecil Prime's wonderful monograph, largely on the British Arum species.  It covers not only the biology, ecology and distribution of the plants but includes fascinating information on its economic uses, folklore and vernacular etymology.  A masterly study -do get a copy: Prime, C. T.  (1960 and 1981)  Lords and Ladies. Collins New Naturalist series.