Every year I try to capture with the camera the feeling that comes when the male hazel catkins, the lamb's tails, at last extend to their full stretch. 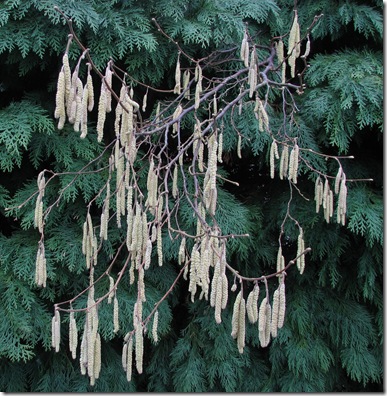 The above show a branchful in our front garden in Sedlescombe.  They show up well against the foliage behind which is that of the tamarisk-leaved false-cypress, Chamaecyparis  lawsoniana Tamariscifolia, at least, this is what it was sold to me as many years ago and I have no reason to disbelieve the supplier, a local conifer nurseryman in Whatlington.

Posted by Patrick Roper at 8:01 pm No comments:

It has rained and rained all day with twin rivers of water pouring down our road and constantly lowering skies with black, threatening clouds.

This picture shows the landscape in the rain from the corner of Killingan Coppice looking west towards Sedlescombe church. 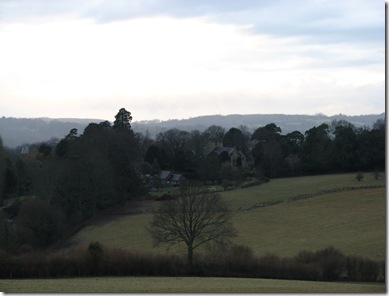 In the hollows of the coppice, the shallow pits caused by past opencast mining operations, probably for iron, will hold water for a few days, but not for long enough to be colonised by any wetland flora and fauna. 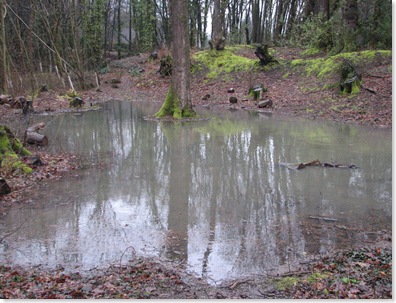 The pale green moss growing on top of the bank on the left is a fine landscape feature in the open coppice at this time of year.

Posted by Patrick Roper at 8:58 pm No comments:

Yesterday, walking through an oak and chestnut wood between Battle and Rye in the East Sussex Weald, we noticed some luminous green plants towering above the wet brown fallen leaves. 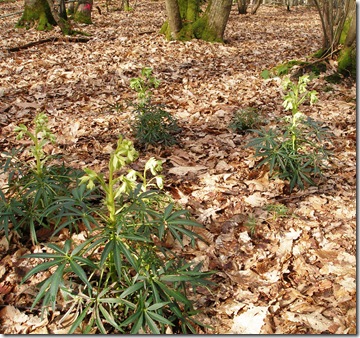 (All photos were taken by my friend Andy Redford who was with me - I left my camera at home as I did not think there would be any worthwhile subjects).

The plants were stinking hellebore or setterwort (Helleborus foetidus), a very rare species in East Sussex, and there were maybe one hundred of them large and small scattered over quite a wide area and clearly doing well.

I have walked through this piece of woodland dozens of times and not seen these plants before, nor do they seem to have been recorded by others, but they must have been here for a long time (perhaps only really obvious early in the year).

There is a story that the first hellebore grew from the spot where a little girl's tear dropped onto the snow because she had no gift for the Christ child.  With all the snow and frost we have had recently and seeing these plants coming up to their best so early, it is easy to understand how such an idea arose.

Another bonus was the discovery on many of the plants of mines of the leaf mining fly Phytomyza hellebori (see below) first recorded in Britain in 2002.  So far as I know this a new species for East Sussex. 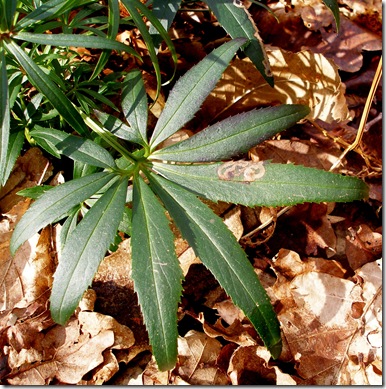 The stinking hellebore is a popular garden plant with an Award of Garden Merit from the Royal Horticultural Society.  In the wild it normally grows on chalk or limestone, so the question as to whether the plant is a garden escape in this wood arises.  Though I do wonder quite how it got there, there are no houses immediately adjacent and all the plants are in natural places, not in spots where garden rubbish might have been dumped.

The name 'stinking' comes from the fact that the leaves smell of decaying meat when bruised, though the flowers have a pleasant honey scent and are good for early insects, especially bumble bees.  All parts though are toxic and though it has been used medicinally, the result may often have been fatal.

A moving postscript to all this is that I found a fine piece of writing on the stinking hellebore penned by my old friend Dr. Tony Hare, the founder and first chair of Plantlife:

Sadly he died at an early age in January and I think this essay is a very fitting tribute to a remarkable man and a great conservationist.  I know he would have been very pleased that we had stumbled upon a flourishing colony of this one of our more remarkable wild flowers.

Posted by Patrick Roper at 7:05 pm No comments:

Despite the cold and snow with continuing hard frosts overnight, there are many signs of spring in the coppice.

Bluebells are sending their small pointed shoots through the leaves. 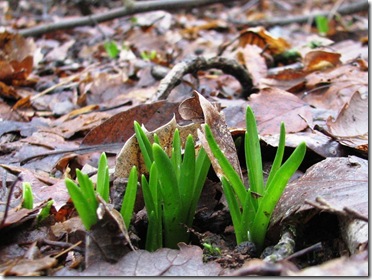 As are the fat shiny rolls of cuckoopint (Arum maculatum) leaves. 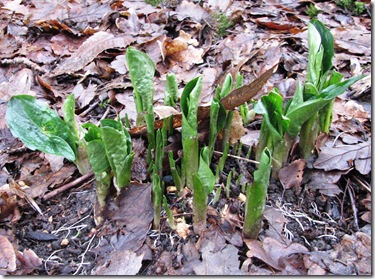 I even found a primrose (Primula vulgaris) in flower. 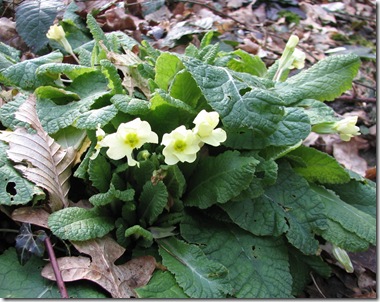 It all makes me wonder if the phenologists are wasting their time.  Here, after the hardest winter in years, many plants are, unsurprisingly, not as advanced as normal.  Snowdrops are still struggling into flower and hazel catkins at the beginning of their season.  Other plants though scarcely seem to have been held back, although I suspect the primrose above may have a bit of exotic blood from a garden Polyanthus which may affect its performance.  It certainly is not typical - just an early flowering form and to use it statistically would, in my view, be somewhat dishonest.

Proper phenology should be done by monitoring the same individual plants season by season, but even this would, I reckon, prove very little about climate change.  As it is people expend much effort looking for the 'first'  this or that of the season without acknowledging that most  plant species produce individuals that are somewhat ahead of the game.

In the case of the hawthorn (Crataegus spp.) there are two native British species one of which flowers about two weeks before the other and many derived from exotic seed that may have strange foreign habits when they are mature.  Phenology recorders are not asked, so far as I know, to differentiate.

Posted by Patrick Roper at 9:40 pm No comments: