9 February 2022. Although the daytime temperature has been hovering between 9 and 12 degrees, I managed today to do some useful work in the garden.  Quite suddenly snowdrops have appeared on the far side of our lane and there are several lesser periwinkle flowers by the pond.  I pottered about in the Square Metre, propping up the Cotoneaster franchetii and pruning hazels, oak, holly and hornbeam into more manageable shapes.  On the holly I though I had spotted a leaf mine of Phytomyza illicis but it is very small and I will have to wait a bit to be certain. 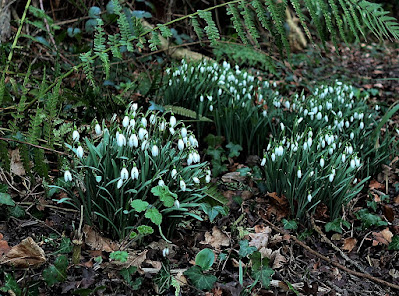 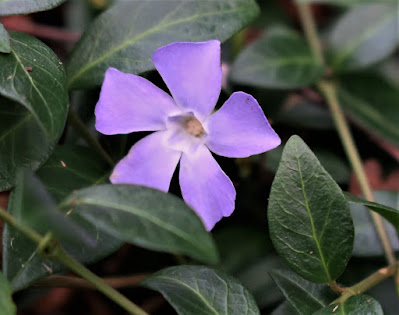 Rather less conspicuous are the tiny green flowers on new shoots of dog's mercury now appearing in Killingan Wood. 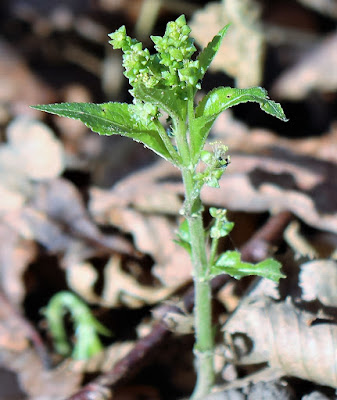 As well as dog's mercury the new bluebell shoots are starting to green the leafy woodland carpet, though the two plants grow in different places in the wood for reasons I cannot fathom. 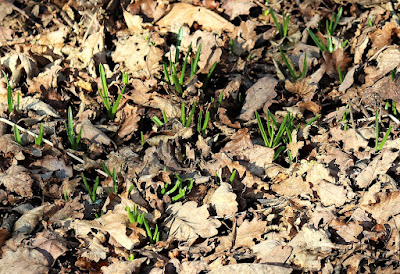 Despite the early signs of spring there are still the remains of autumn and winter.  Some beech trees have not lost their dead brown leaves but this only seems to be the case with young trees and those that are used in hedging.  Leaves are long gone from the larger beech trees. 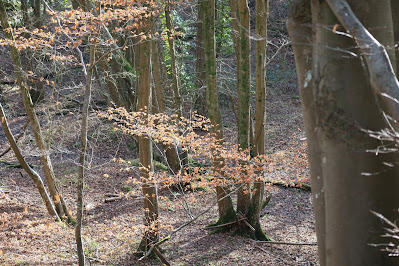 The evergreen shrub Euonymus japonicus or Japanese spindle tree is much used for hedging along our lane and in gardens, but it fruits poorly or not at all.  However, I found a fine crop of fruit in a south facing hedge in a nearby garden.  Most of the fruit are now just an outer capsule, but the inner seeds covered with a bright orange pulpy aril can be seem in some.  In our native spindle tree this aril is "richer in nutriment than the pulp of any native fruit" (Snow, B & D. Birds and Berries). The seed inside the aril is toxic. Robins are said to be very fond of the arils and I imagine the fruit of the Japanese species has similar qualities.  Originally from Japan, it was introduced to Britain in 1804.  Trees and Shrubs Online says "It is a handsome and cheerful evergreen much used in south coast watering-places for hedges, where the sea air seems to suit it." 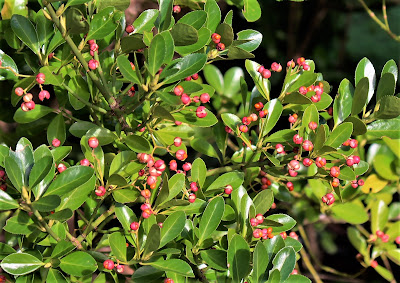 People look out eagerly for the first spring flowers and I also enjoy the earliest leaves like those on the elder below. 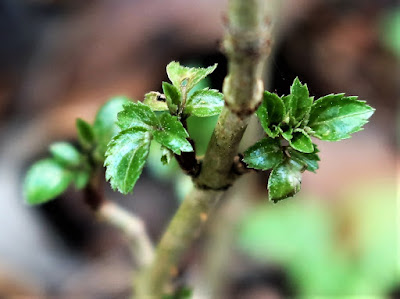 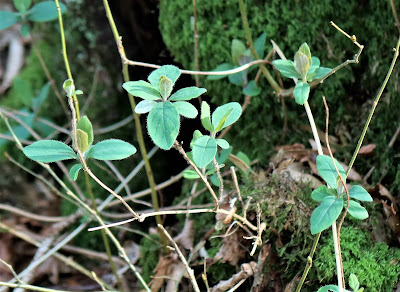 Next door the 'tommies', or elfin crocuses, Crocus tommasinianus are outting on their annual display and there are hundreds of flowers in a small front garden.  Also the plant has started to seed itself outside the curtilage of the garden plot.  Where will this stop? 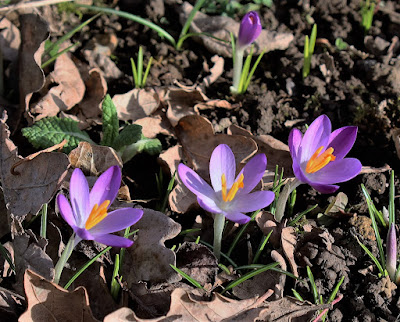 12 February 2022  The first spring flower, a rather battered lesser celandine, came out in our lane today.  The stalk bisecting the picture is a bracken stem and the black marks on it are, as far as I can determine, the common microfungus Rhopographus filicinus. 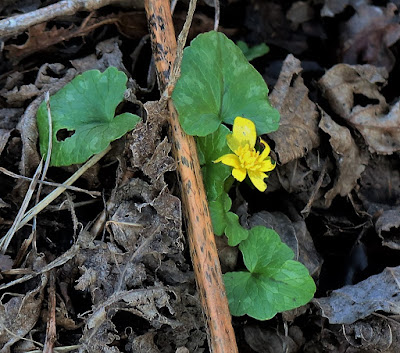 16 February 2022  The wind has risen and the temperature had risen too, reaching about 12 degrees C.  It was wet underfoot and slippery in places as the mud returned.  There were coffee-coloured puddles in the lane and deeper pools of cloudy water in the various pits in the wood.  Here the bluebell leaves are now making a continuous green ground cover  Leaves of wood anemones are also appearing often close to the base of trees where, perhaps, there is a slightly gentler microclimate.  One or two are showing flower buds head down in the centre of the frond like small eggs. 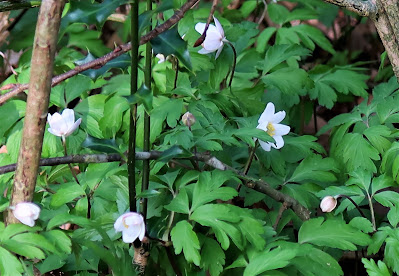 On the western verge beside the lane I counted four celandine flowers rather outshone by a growth of bright orange jelly fungus (Tremella mesenterica  see below) on a small fallen branch. Where the vegetation has been cleared back to the hedge, leaving a wide strip with rich looking soil there are no flowers yet but there are rich green carpets of young goosegrass and dozens of very healthy looking tufts of cuckoopint (Arum maculatum) leaves now reaching some 10 or 15cm above the ground. 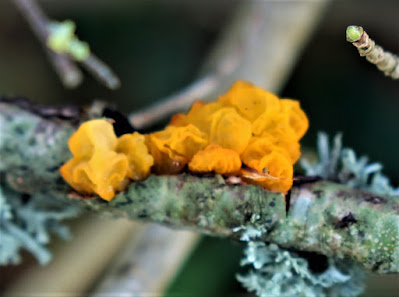 18 February 2022 The storm Eustace, pronounced one of the worst storms in three decades, travelled from the West Country to London and the South East.  The MET Office issued a red warning (the highest danger) from 10am to 3pm.  At 10.25am the electricity went off for a while and we were left with just the sound of the gusting wind though, at the beginning of the 'red' period it seemed little worse than many winter gales of the past.  Later there was some thin guttering sunlight between gusts that bent our garden trees but did not topple any.   I was worried about the tall birch tree in the Square Metre, now 18 years old, and I watched as the trunk slalomed in the wind like an ice dancer.  It survived undamaged.
As the storm drifted away in the mid-afternoon and the danger level fell to amber, I wandered down the garden tottering slightly in the remaining buffets of wind.  A few hellebores were out as were primroses and the Tenby and February Gold daffodils.  Despite the stormy weather, much seemed to have advanced in the last few days. 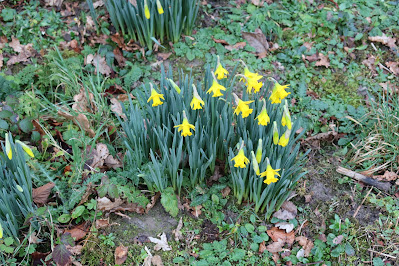 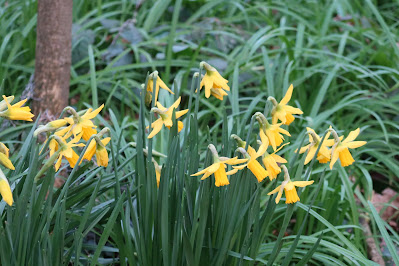 Apart from a scatter of small branches and twigs the garden had suffered little appreciable damage.  In the Square Metre the dead ash maiden had broken and fallen right across the square, where I will leave it.  The tree appeared originally at the western edge of M3 and grew for perhaps 8 or 10 years before succumbing to what I thought might be ash die back disease.  It remained upright, propped by the lower branches of the medlar, until today.  Its continued transformation as dead wood will give me much to think about. 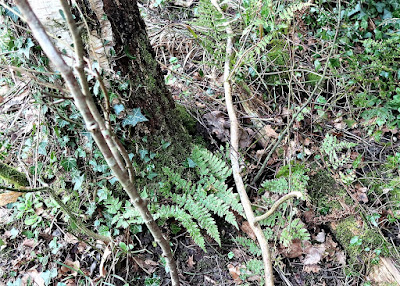 At about 8.15pm the electricity went off again and stayed off through the night of the 19th and the following day until a quarter past midnight on the 20th.  I slept in my clothes like a large pink worm in a cocoon of layers of clothes.  It was dark and cold, but boredom was the worst problem as we had no radio and the light was too dim to read by.
The 20th February was still very windy but, apart from a morning interruption of the mains water supply, life had returned to normal and the news switched back to the Russian threat to the Ukraine, the future of Prince Andrew and the Queen's infection by the Covid virus.  Around midday I battled my way through what has now been named storm Franklin to the entrance to Killingan Wood where a large branch of oak had fallen.  A huge chunk of the Maryland poplar had blown off into a garden but there was little damage in the part of the Killingan Wood I explored apart from some fallen small birch trees. Later I discovered a large oak that had blown down in Churchland Wood revealing in its broken trunk a large quantity of rich red and brown rot. 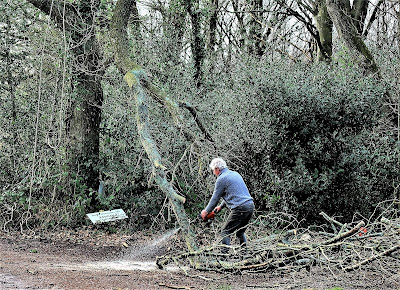 I struggled home with the wind roaring like a train in savage bursts through the trees and over the hedge.  The weather forecast suggests little change before the end of this month, but in the calm between the storms I found this marmalade hoverfly (Episyrphus balteatus) enjoying an early lesser celandine.  The larvae feed on aphids and the adults have been said to be the only fly known to be able to crush pollen grains for food.
This verse from a poem by Robert Frost seems appropriate:
But the flower leaned aside
And thought of nought to say
And morning found the breeze
A hundred miles away. 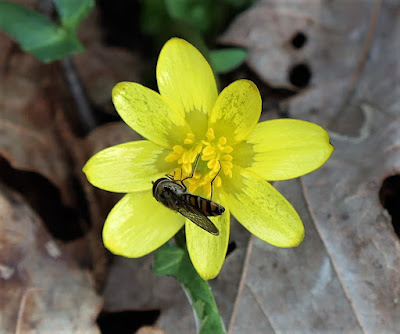 24 February 2022  Around 4 o'clock in the morning I woke to hear on the radio that the invasion of Ukraine by Russia had started.  Huge commentary all day on the media highlighting how this might lead to a different world with currently unknown characteristics.  My almost daily walks to Killingan Wood or Churchland Wood acted as some sort of antidote to the alarming news from the east, but I am too old now to be greatly worried, though I feel for those who are, or will be, adversely affected.
Little Oaks has some very early flowering daffodils and I discovered a surviving Iris reticulata in a tub.  Normally they do not seem to survive outdoors in British conditions.  There were also some Cyclamen coum flowering in a shady spot underneath some fir trees. 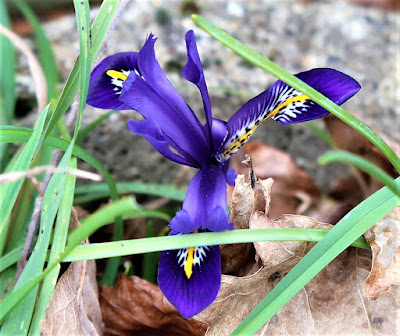 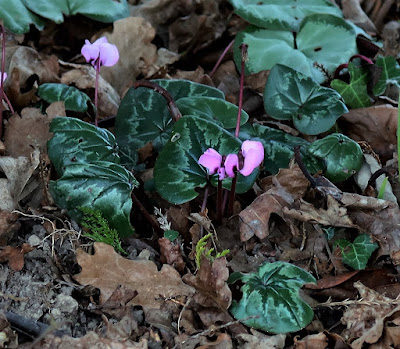 28 February 2022  One of my granddaughter's 18th birthday: sadly it looks like troubled times ahead and I hope her generation will be able to construct a more peaceful world.
Watching the development of the conflict in Ukraine, especially seeing the pre-school refugee children, brings back many memories of a similar period of my own life.  I was born in 1938 in Chingford on the north eastern outskirts of London, so World War II started when I was one and a half and went on until I was seven.  I remember most of the things we are seeing on TV now.  The German bombs that nearly demolished our house, the barrage balloons and fighter aircraft overhead, the food rationing and immense journeys with my mother on slow, overcrowded trains.  My father disappeared into the army and I did not see him again until the war was over.  Only in later life did I appreciate the stress my mother must have been under contemplating the possibility of invasion, with a small child and a husband in harm's way in some unknown overseas place.
People today say how children are being traumatised.  Apart from the fact that nobody seemed to use that word in those days, I don't think I was unduly affected largely because I had scarcely known anything other than wartime conditions.  I felt okay so long as I was close to my mum. Air raid sirens do, however, tend to wake me up with a start and I have memories of having to go and sit in crowded underground shelters in the middle of the night with frightened people.  Since the Ukraine war started my concentration has been poor and I think some deeply buried memories of those early years of my life have arisen in a subconscious but disturbing way.  In 1939 we had six years of war ahead without husband or father and more years of subsequent austerity. It wasn't really until the 1960s came along that the clouds seemed to lift and what fun that was. In the war my mother used to like a tune called We'll gather lilacs by Ivor Novello.  I hated it, but now I understand:
We'll gather lilacs in the spring again
And walk together down an English lane
Until our hearts have learned to sing again
When you come home once more.
www.youtube.com/watch?v=OvC8gz-cq88
Posted by Patrick Roper at 4:00 pm