1 March 2022 It has been a generally rather cold and drab start to the month with the mood not being helped by Russia's war on Ukraine.  I am lucky in having a small area of wood, lane and field to enjoy away from the news.  In his speech to the Commons on 8th March Ukrainian president Volodymyr Zelensky said his people would fight in the fields, the forests and on the riversides perhaps indicating how important these places are as emblematic of a home country. However, when the wind comes from the north, rattling the bare branches in Killingan Wood, it is difficult not to be saddened by the plight of those distant people in much deeper cold who have no home left to go back to. 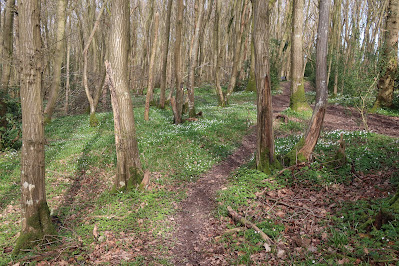 9 March 2022  A gratefully warm day at last.  There was enough afternoon sunshine to warm my back. On my walk my spirits were lifted by the patches of sunny celandine flowers along the verges of the lane.  In the woods the white anemone flowers are a landscape feature and some of them have pink reverses to the petals and occasionally they are wholly pink. 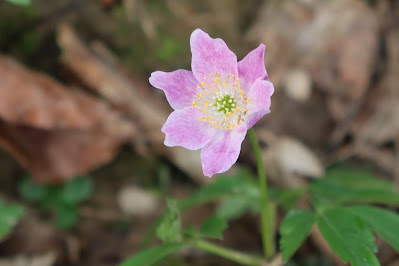 I found several rosettes of heavily spotted early-purple orchid leaves and the Euphorbia robbiae (Mrs Robb's bonnet spurge) is at its best in the patch by Churchland Lane.  New leaves are greening many of the trees like this hornbeam. 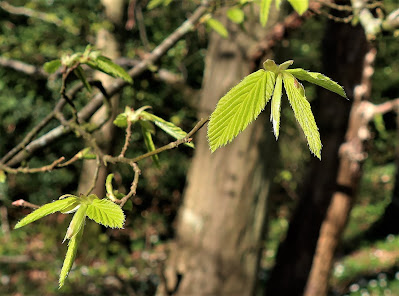 The garden in brightening up rapidly with several camellias now in flower as well as the Pieris 'Firecrest' at the end of the garden.  In my Square Metre Mark 2 I found a small plant of bristly ox-tongue.  This is, I think, the first time I have noticed this species in the garden and I wondered where it might have come from.  The camellia below is the white semi-double 'Yuki-botan'. 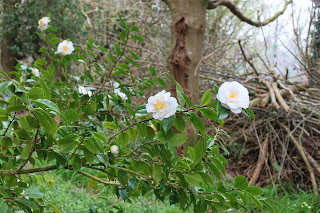 15 March 2022  At last the weather feels more spring than winter and today I saw the first brimstone butterfly on the wing - a male.  That flake of intense citrus yellow searching the garden air, looking for bluebells and buckthorn is like a flag from a starter  - spring cannot be stopped now.  In the garden it found our only plant of the grape hyacinth Muscari armeniacum. 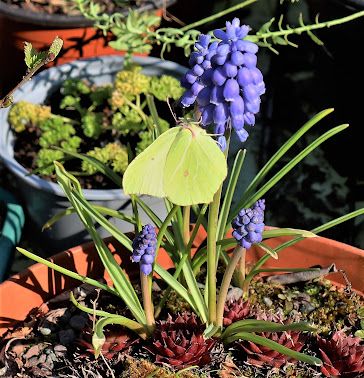 Yesterday I found a large patch pf spring snowflake on the wood bank at the end of Churchland Lane.  A surprise as I have been past the spot a thousand times without noticing it. 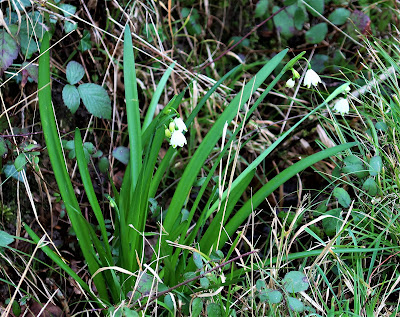 Later I ventured into Churchland Fields where the gorse is at its best and photographed a grey willow that stands alone.  One seldom sees a free-standing tree of this species as they are normally muddled up with the scrub vegetation in regenerating secondary woodland. 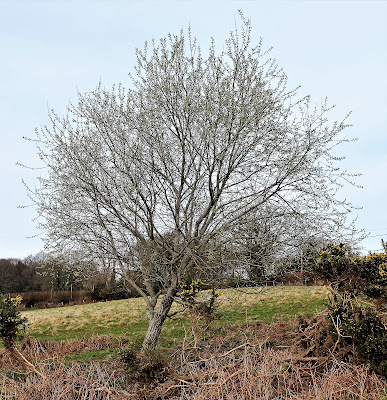 20 - 31 March 2022.  The spring progresses and there are many dandelions out along the verges.  On one I saw a small sallow mining bee, Andrena praecox, the first solitary bee of the year but sadly they seem to be less common than usual. 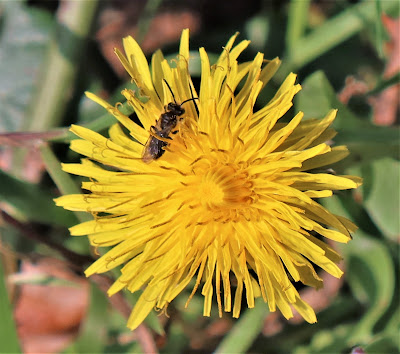 By 23 March the first black bryony shoots were snaking upwards, horse chestnut buds were breaking and I found an extensive colony of common dog-violet, Viola riviniana, in the north east corner of Churchland Fields. 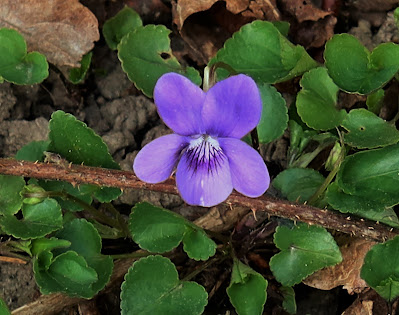 The warm, sunny weather continued until 30th March.  On 26th I saw my first greater stitchwort flower in Churchland Lane and the first bluebells in Killingan Wood.  On 31 March we had hail and snow showers and there was an overnight frost, one of the sharpest in the generally mild darker months.  In April we learnt that March had been the sunniest on record in parts of the north and Scotland. 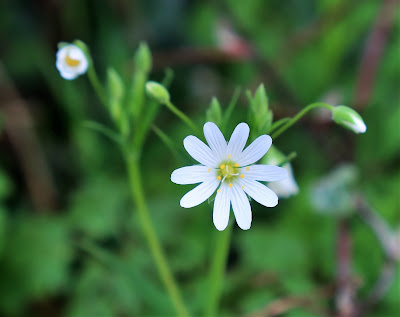 Posted by Patrick Roper at 6:19 pm