21 January 2022  While the earth, covered in dead autumn leaves, waits for the green sprinkles of spring, the leaves of stinking irises (or gladdons), Iris foetidissima, make lovely sunshot fans.  This is a plant that continues to increase locally. 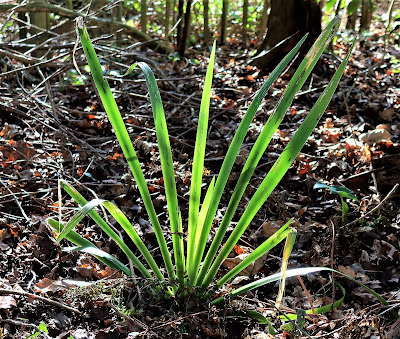 Another plant that comes into its own in winter is a large variegated Persian ivy, Hedera colchica Dentata Variegata.  Here it has climbs high up an oak tree in our garden and makes a good winter shelter for small birds and, no doubt, various insects.
If I walk around the footpath that passes to the south of Saul-Hunt's paddock I often see their free range chickens, brown feathered bundles like animals in a child's farmyard.  Although we often don't treat them very well, they are endearing  creatures as they walk jerkily across their patch looking for seeds and insects. 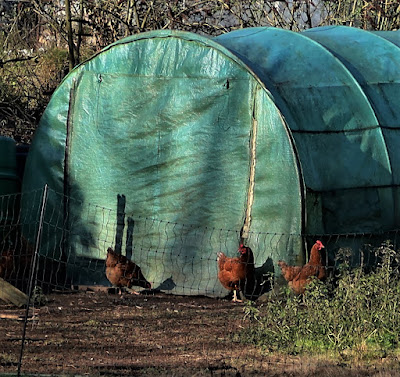 A little further on there is long overlap board fence.  The local badgers can't be bothered to go round this and have dug a hole under it.  Such animal runs are known as 'smeuses'. 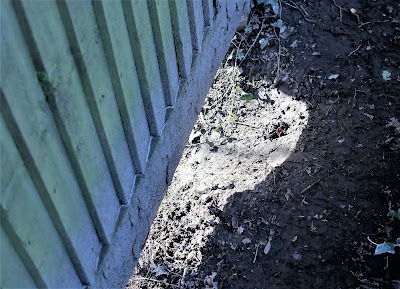 In winter natural patterns become more obvious as there is not so much to see.  I liked this debarked branch (below) with snake-like markings, perhaps trails of insects that lived under the bark when the branch was alive or recently fallen. 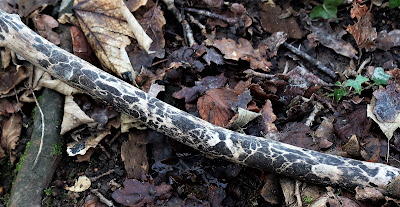 20 January 2022  A sequence of frosty nights and sunny days has slowed the onset of pre-spring.  In the lane new tufts of nettles are showing and it will soon be time for nettle soup, zuppa di ortiche. 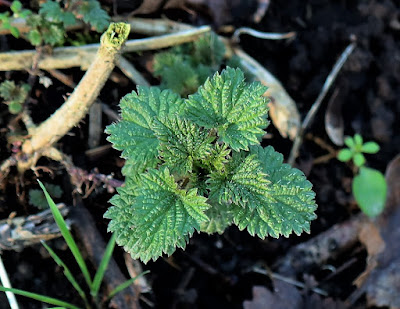 A few bluebell leaves poke through the ground ahead of the main flush and I wonder if they sare hybrids with Spanish bluebells or have some other genetic quirk. 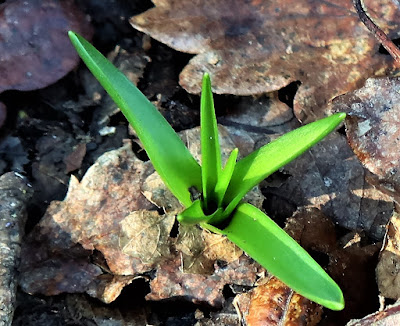 In Killingan Wood I found what looks like a bush of Highclere holly, Ilex x altaclerensis.(see below). Some of the leaves look like the cultivar Cameliifolia as illustrated in Johnson & More, Collins Tree Guide, but in online picture the leaves of Cameliifolia are spineless, or almost spineless.  The Killingan Wood bush may be a hybrid between our native holly, I. aquifolium, and one of the Highclere cultivars of which there sre probably many in local gardens. 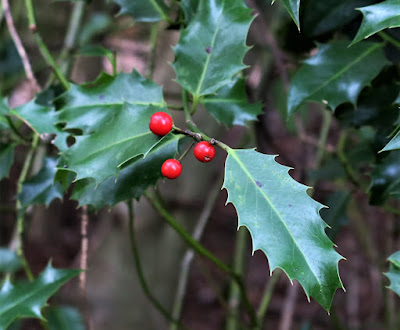 17 January 2022  Cold nights but sunny and cool days.  A badger has been digging for worms in the newly exposed stretch of verge alongside Churchland Lane 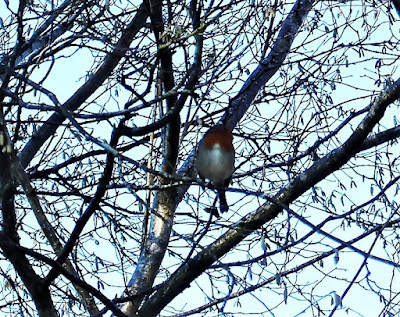 Birds are warming up for the breeding season.  The robin above was in full song in a hazel bush (with developing catkins in the background), a tawny owl was hooting in Churchland Wood and a great spotted woodpecker drumming in the trees along the stream on the western side of Churchland Fields.

The hazel catkins in the picture above mostly are closed, though higher up the bush they are starting to open (see below), while on the opposite side of the lane, in another bush, they are fully open. 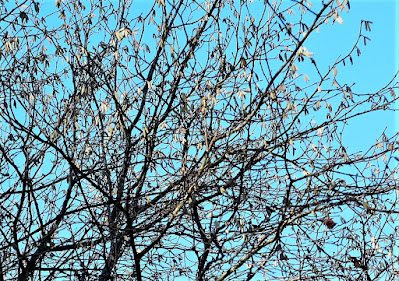 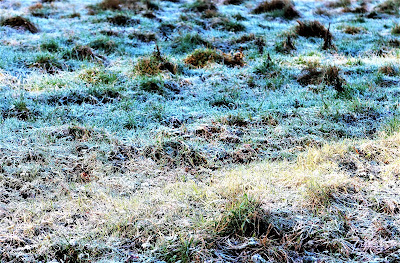 A sharp frost overnight whitened the grass in Churchland Fields and covered creeping buttercup leaves in my second Square Metre with Ice crystals like a scattering of sugar. 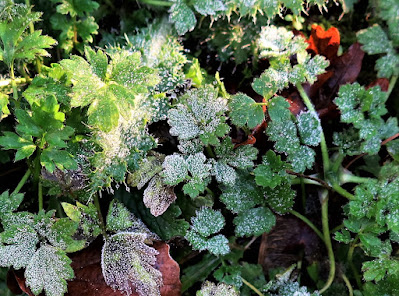 I noted two leaf mines in a frosted bramble leaf halfway down the garden.  I am pretty sure these have been made by the larvae of the tiny moth Stigmella aurella (there are some similar species that mine bramble leaves).  The larvae and pupae can survive frosts and, if occupied mines are brought indoors and kept in a jam jar, the moths like sooty, black sparklets will emerge often quite quickly. 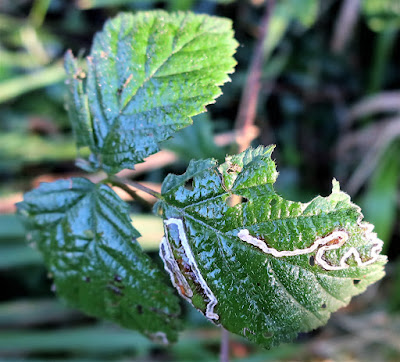 I had a moment of delight when I found a single dandelion in full flower despite the hard weather.  As Wordsworth wrote:
To me the meanest flower that blows can give
Thoughts that do often lie too deep for tears. 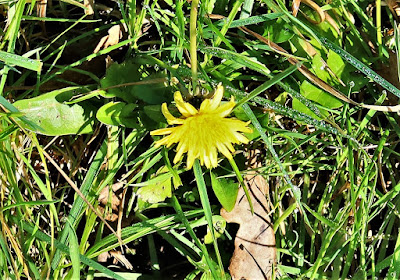 13 January 2022  I often wonder why some red berries are consumed by the birds much faster than others.  Those of rowans or hawthorns are stripped very quickly, for example, but black bryony and holly berries often stay in place well into the new year and there is a small bush in our lane of a rose cultivar covered in hips this mid-January (below). 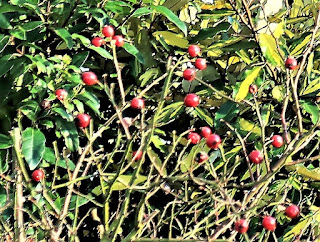 One of my favourite books Birds and Berries by Barbara and David Snow (T & A D Poyser, 1988) says that black bryony berries are eaten, usually after they have been on the vine for some time, by blackbirds and thrushes, though robins will occasionally tackle them though they are rather too large to swallow in one go. 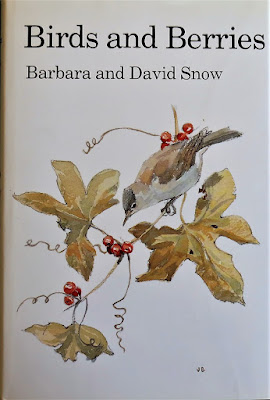 Black bryony berries (below) are toxic to humans but perhaps simply rather unpalatable to birds.  The problems with humans and, presumably with other mammals, is that the berries (and root tubers) are full of calcium oxalate that forms tiny needle-sharp crystals that can penetrate skin and cell walls causing irritation which can be dangerous internally. 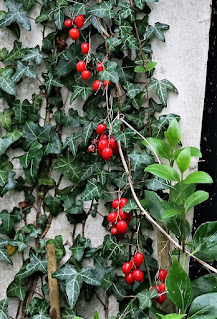 Two hollies in particular have caught my eye this autumn and winter .  One was an example, probably of garden origin, with an exceptionally rich crop of berries hanging over a fence in Broad Oak Brede (below). 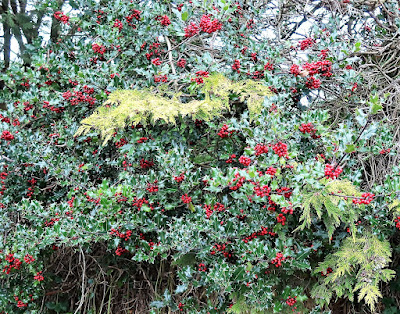 The other is a young plant on the fringe of my Square Metre project where it has been bird-sown from the overhanging medlar tree (see below).  It looks like a form of Highclere holly, Ilex x altaclerensis,  Judging by the shape and texture of the leaves and the prickles it is probably a hybrid between a garden form of Highclere holly and our native species, what is known as introgressive hybridisation.  The I. x altaclerensis of horticulture is a hybrid between Ilex perado (probably from Madeira) and our native species.  It is widely planted in gardens usually as a variegated clone with almost or completely spineless leaves. 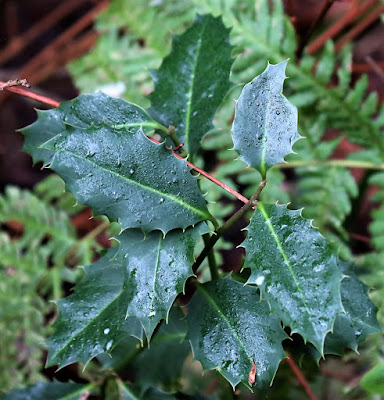 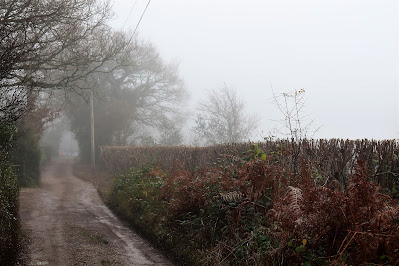 A lot of my 'ramblings' are now confined to Churchland Lane (above), the unadopted road to my house.  It is a cul-d-sac 833 metres long and it rises from 60 to 75 metres to the north of the East Sussex village of Sedlescombe.  There are good views to the west as far as the forest ridges to the north and south of Battle.  The horizon in picture below shows the highest part of Dallington Forest some 8km (5 miles) to the west of the lane with Sedlescombe parish church in the foreground. 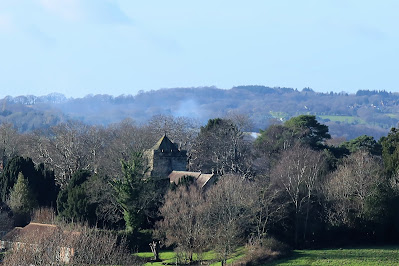 I also like the view, also to the west, across Churchland Fields to the bright buildings with their mix of evergreen and deciduous trees on Sandrock Hill.  They often catch the afternoon sun.

8 January 2022  Cold, hard rain all day and all night.  I didn't venture forth.  Instead I took this picture, blurred with rain, through the French windows out into the patch of garden I spend much of each day contemplating. 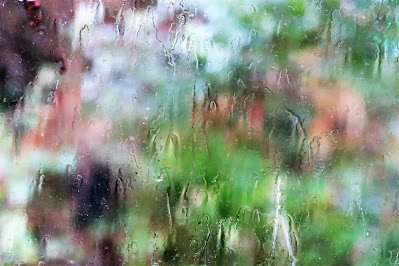 I wondered where the birds I usually see were sheltering.  The commonest species (I don't have bird feeders) are blackbirds, hedge sparrows, wrens, robins, thrushes, wood pigeons and magpies.  All the finches, except that occasional goldfinches and bullfinches, have disappeared and, of course, there are buzzards and things flying overhead that I cannot see. Indeed when the windows are covered with raindrops and my glasses are dirty I cannot see very much at all. It's cold indoors too.

6 January 2022  A sharp overnight frost leaving a white sheen over the lawn and silvered fallen leaves on the wooden ramp outside my window.

The terminal leaves of the spurge Euphorbia amygdaloides ssp. robbiae (Mrs Robb's bonnet) start to expand, in their bent over way, at this time of the year like narrow hop cones and contrasting with the old, darker green foliage.  In a few weeks they will have grown into flower heads. This is one of the earliest signs that things are starting to move towards spring. 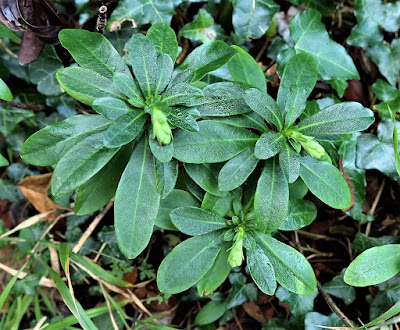 5 January 2022  A sunny, mild morning.  In the hedge on the eastern side of the lane I found a single plant of Berberis darwinii.  Though not very obvious, I was surprised at the number of times I must have walked past it without noticing it.

We have a very active thrush, perhaps a pair, in the garden that looks as though they will soon be starting to build a nest.

3 January 2022  A change of walking route took me right to the end of Churchland Lane (nearly half a kilometre from home). A few metres up Hurst Lane, in the front garden of Tresco, I stopped to look at the fragile blossoms on the winter flowering cherry, Prunus x subhirtella 'Autumnalis Rosea'. 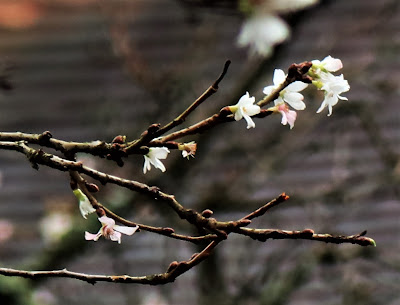 This cherry is a very long-lived species and there are some massive and very old specimens in Japan where it originated. There is, for example, an 1800 to 2000 year old  tree called the Jindai Zakura in the grounds of the  Jissō-ji temple in the community of Hokuto in Yamanashi prefecture. Some stones of this were taken into space by NASA and circled the earth for 8 months.  One of those which germinated produced flowers with six petals instead of five.

Must get more done this year.

On the western side of Churchland Lane there is a 30 metre stretch of verge that has been cleared right back to the hedge. This has left a 2 metre wide stretch of somewhat disturbed, dark and rich looking soil with a variety of low growing plants and the saw-shattered stumps of young trees and shrubs. A distinctive feature on New Year’s Day was the many shiny green tufts of emerging Arum maculatum, cuckoopint, leaves perhaps a hint that this newly uncovered section of this verge will reveal much of interest in coming months. 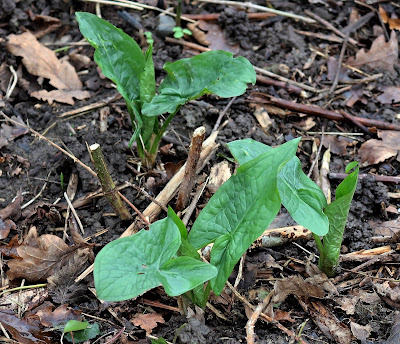 In the garden the pink, single camellia (Camellia × williamsii 'J.C. Williams') always the first, has started flowering. My late wife used to refer to this as "her camellia", though there were many more varieties in the garden. I assume it was because she could see it from the kitchen window.  The wintersweet (Chimonanthus praecox, là méi) in the flowerbed where the old shed used to stand is in full flower and casting its powerful scent on the air on milder days.  This year it has perhaps the best display I have seen but the blossoms turn to a dowdy speckled yellow if there is much frost (so far this winter we have had only one or two nights of light frost and today the temperature reached 14°C, very high for the time of year). 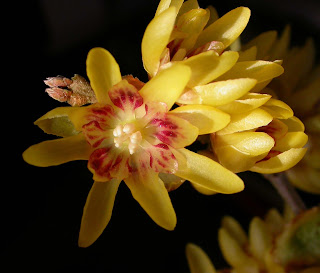 Wintersweet is found wild in China where it is also widely grown, both for its winter scent and various medicinal properties.  The flowers can be sprinkled into tea.

Killingan Wood was calm and damp, a silent army of grey trunked hornbeam trees, with a carpet of decaying fallen leaves braided by muddy tracks.

On my walk I saw very few insects. Over most of my life warm winter days like this have seen numerous small swarms of many insect species that are adapted to flying only in the winter months. But they seem to have gone. This will affect birds and spiders as well as the many small creatures that must have fed on their fallen bodies and earlier stages. The consequences for biodiversity are unknown.

Many writers reflect on the decline of the cuckoo, or the pearl bordered fritillary, but this morning I would like to pay homage to an absent friend: Gymnometriocnemus brumalis a winter flying, non-biting midge.

Maybe, if we have a cold spell, there will be a belated emergence, but I hope 2022 will not be the year when we have to say goodbye to this small winter flying insect. 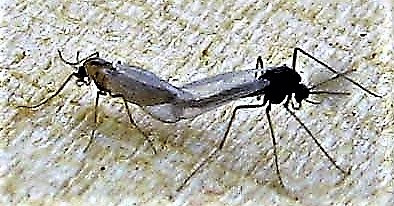 Posted by Patrick Roper at 7:34 pm