In an obscure corner of the garden the light caught a small conifer maybe 5cm tall.  An adventurous seedling that is probably a yew, but possibly something else. The leaves go all round the central stalk, though I expect this is just a characteristic of a seedling. In Bean's Trees and Shrubs it says of the mature plant "leaves spirally attached to the twigs, but by the twisting of the stalks brought more or less into two opposed ranks."  This made me look more closely at the mature yews in the garden with their bipinnate branchlets unlike the newly found seedling. 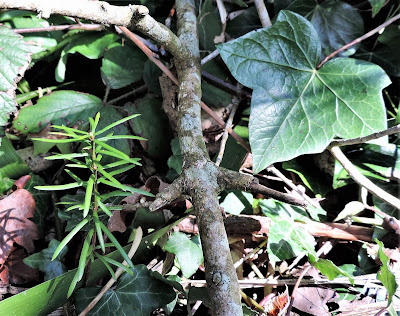 Not far away from the conifer there is a mound, the remains of many bonfires.  Tana grew potatoes on this last year and there is a fine selection of weeds each summer, well nourished by the chemicals in the ash.  Wood ash is a variable substance but usually composed mainly of calcium carbonate.  However, there is often around 4% potash and 1% phosphate plus various trace elements.  But I digress, the find of the day was a solitary flower of coltsfoot (Tussilago farfara) growing on the side of the mound. 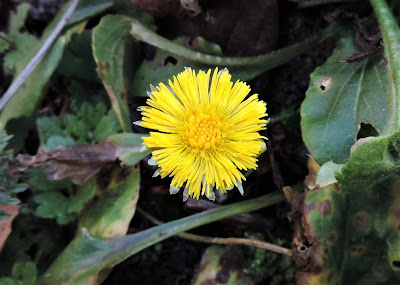 Coltsfoot flowers appear at this time of year before the large leaves (shaped vaguely like colt's feet) and they are not at all common in our immediate area, preferring heavy clay soils.  I have never seen any in or near our garden.  A piece of root might, I suppose, have been brought in from somewhere else, but that seems unlikely.  As it is a native plant, arrival by seed would seem the most probable explanation.

An infusion of the leaves was once widely used as a remedy for coughs and, in some places, the dried leaves were used as a substitute for tobacco and smoking it was said to help asthma sufferers.  The plant is also used to flavour coltsfoot rock made, over the last hundred years, to a secret recipe by Stockley's Sweets of Oswaldtwistle in Lancashire.  The aniseed/liquorice flavour is said to be 'strangely addictive' and it appears to be quite popular still.

Posted by Patrick Roper at 5:05 pm