The old sallow tree in the middle of the garden died last summer and is now sporting a fine crop of Daedaleopsis confragosa the thin walled maze polypore or blushing bracket, the second name referring to  the pores (botanically described as 'daedaloid') on the underside that 'blush' pinkish if they are pressed with a finger.  The fungus is often found on willows and sallows (Salix spp.) but also occurs on many other trees where it causes white rot. 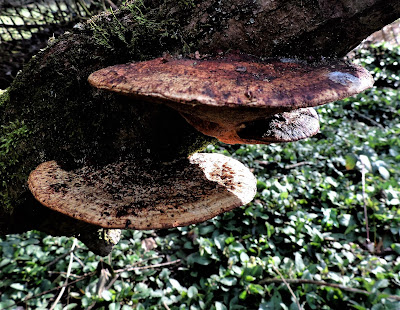 The fungus is named after Daedalus, a Greek architect and inventor who was commissioned by King Minos to build the labyrinth on the island of Crete.  Author James Joyce sometimes used the name Stephen Dedalus or Daedalus in an autobiographical sense perhaps referring, among other things, to the labyrinthine qualities of some of his writing.  'Confragosa, simply means 'rough' and refers to the upper sides of the brackets. 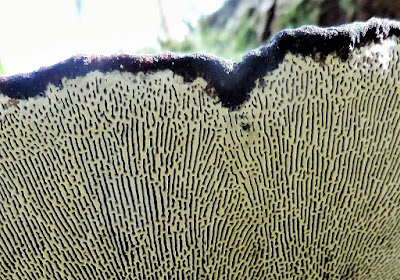 Posted by Patrick Roper at 5:09 pm