The mouse and the cherry stones

Underneath a large wild cherry tree (Prunus avium), in a small open area enclosed by protruding roots, I found a large horde of cherry stones.  Each one had a hole chewed in the top.  These holes had been made by a wood mouse, or mice, (Apodemus sylvaticus) to extract the kernel within.  In summer the ground beneath this tree is strewn with fallen fruit and I wondered if the mice had collected these, maybe eaten the pulp, and then stored the cherry stones for later use.  Though there were no stones that had not been opened, considerable effort must have been involved in making such a large midden, so maybe each one was brought from a store concealed nearby and dropped outside once its contents had been consumed. 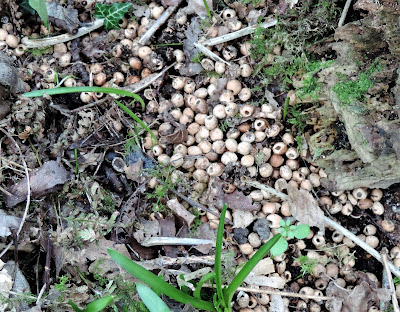 As well as wood mice, cherry stones can be holed by dormice and voles although the markings made by the animals' teeth around the rim differ for each species.  There are a several illustrations of this online; a good one is at: https://ptes.org/wp-content/uploads/2014/07/chewed-nuts.jpg

Cherry stones have a reputation for toxicity as they contain amygdalin which converts to cyanide in the body if ingested.  The amount of amygdalin in the kernels seems to vary considerable and there is a wide range of commentary on the Internet as to their relative danger to humans.  One commentator claims that "A single cherry yields roughly 0.17 grams of lethal cyanide per gram of seed, so depending on the size of the kernel, ingesting just one or two freshly crushed pits can lead to death".  Others recommend they are used to flavour cherry jam.

However, according to Adriano Chan et al., mice are more resistant to the effects of cyanide than humans (see https://tinyurl.com/2snymrvy) so it would appear that our wood mice have not been in danger of poisoning themselves.

Posted by Patrick Roper at 1:05 pm