I found this army of small toadstools on the outskirts of Sedlescombe village today. 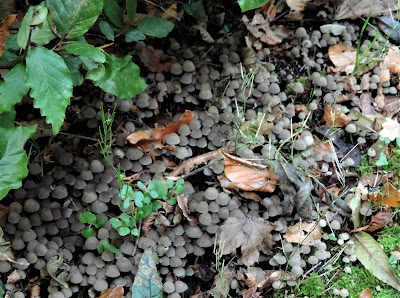 After suggestions from Clare Blencowe and Martin Allison of the Sussex Fungus Group it looked as though they are fairy inkcaps. Coprinellus disseminatus (there is a lookalike in Psathyrella pygmaea but the Coprinellus has minute erect hairs on the cap) so I walked back to the site and checked with both hand lens there and microscope later at home.  The hairs are present so it seems C disseminatus  is the correct species.

Fairy inkcaps are pale buff or white when young as in the picture below, which was taken a short distance further up the path.  Also they do not, like many other inkcaps, dissolve into black liquid as they age. 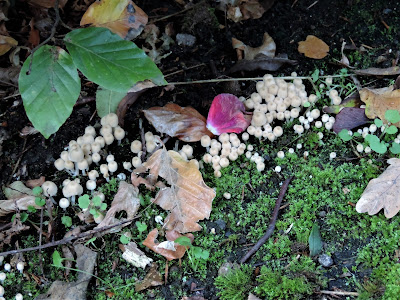 And here is a close up (though the hairs are scarcely visible). 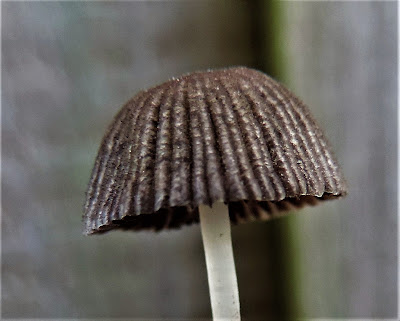 Walking to the site I passed someone's front lawn with many blackening waxcaps (Hygrocybe conica) and a neat little ring of orange waxcaps (TQ783184).  Via a quick trespass I retrieved one of these (see below) but have found it impossible to name.  Waxcaps come in a variety of colours including yellow, orange and red and are quite variable.  I would call mine orange.  It has a dry cap and stipe and white edges to the decurrent gills.  The black is made by spores of other fungi.  Using the Quick Waxcap Key this suggests Hygrocybe pratensis, H. turunda or H. cantharellus.  It isn't pratensis and I am not convinced by the possibility of turunda or cantharellus so it will be left unidentified. 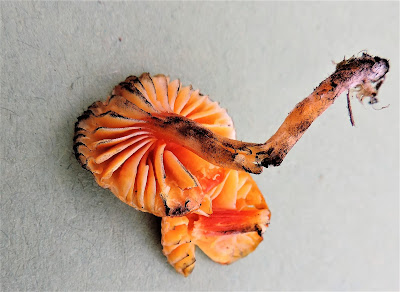 On the southern side of Brede lane as I headed home(TQ784181) I found several of these 'little brown jobs' of the toadstool world growing on the grass verge.  My books have dozens of species that look like this, so I am not even having a guess at its identity. 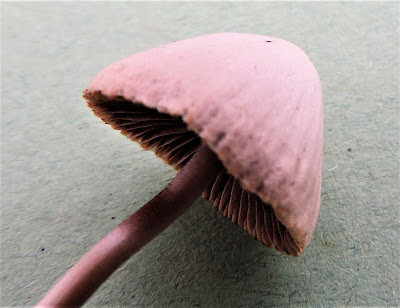 On the banks of the Gorselands Estate I found several waxcaps like the one below.  I suspect that they are meadow waxcaps (Cuphophyllus pratensis) that have had close encouters with a strimmer, but there are other possibilities. 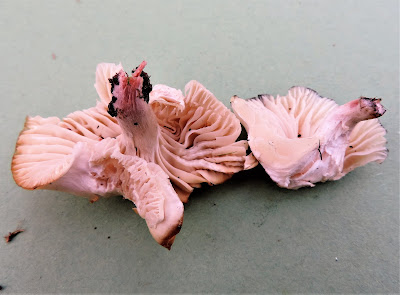 Not far from these on a mossy lawn edge there were some tiny toadstools that, so far as I am concerned, could be anything.  Again the books have lots of pictures of these tiddley things, but much more is needed than pictures to make any progress I think. 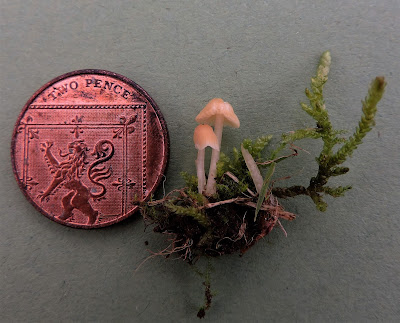 My next encounter was at the corner of a field (TQ784185) where I was obliged to get out of the way of a rather savage-looking dog.  It looks like an ink cap, as it is starting to deliquesce, possibly Parasola plicatilis. 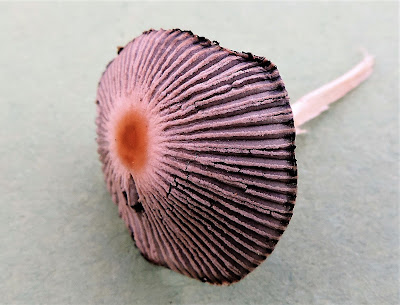 Carrying on with my impromptu foray I found this clustered species on one of the piles of woodchip left by the men clearing the transmission lines in the spring.  I ought, I feel, be able to identify them but, with so many unidentifiables already my brain was beginning to hurt. 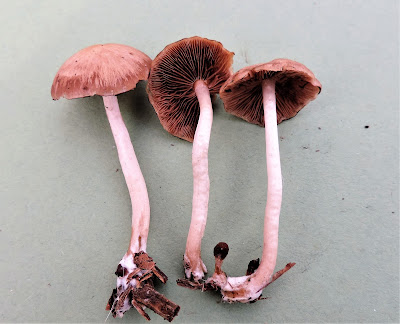 Talking about brains, my last find was of a lonely coral fungus in Churchland Wood (TQ783188).  I managed to find a Fennoscandinavian key to this group, but clear determination was dependent on what the spores were like and I am not quite sure where to find the spores on fungi like these.  And even if I could I am not certain I would be confident of an unequivocal determination.  It does rather make me wonder how many fungi have been misidentified by people leafing through books of coloured pictures that normally contain only a selection of British, European or American mycoflora and no details of spores or other important structures. 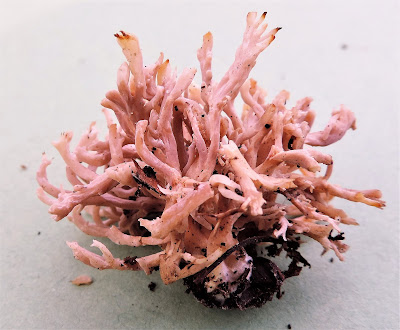 Anyway, If anyone can suggest identities for any of the above, I would be grateful to hear from them.

Posted by Patrick Roper at 6:51 pm