Since last year my interest in the genus Hylotelephium has grown.  Hylotelephium includes many species and varieties that used to be in the genus Sedum but in most cases they are quite large plants with ovoid fleshy leaves, often grown in borders and beds.  Some, but not all, have flower heads that are attractive to butterflies, bees and other insects during their period of bloom which stretches from the end of July well into October.

My personal interest was aroused by the occasional patches of orpine (Hylotelephium telephium subsp. fabaria) I came across in Brede High Woods, East Sussex.  Where it occurs it seems to grow and flower quite well in shade or semi-shade and is considered to be an indicator of ancient woodland.  It also grows by wayside hedges and ditches and I know several sites where it occurs in our parish of Sedlescombe.  It is our only native species of Hylotelephium though some others have escaped into the wild from gardens and parks.

The picture below shows how it grows in Horns Wood near Brede.  The stems lay themselves down naturally and, as they can root and produce new plants from the leaf nodes, the species is able to spread vegetatively.  Seeds also germinate quite freely in the spring after they have set. 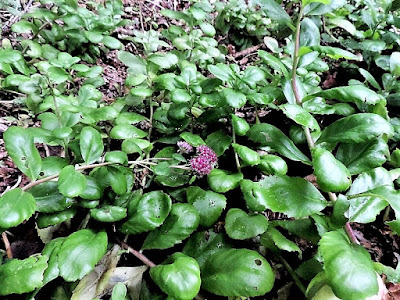 The flowers last for several weeks and are attractive to a wide range of insects, particularly bees, butterflies and hoverflies.  I have several plants in my garden and the meadow brown butterfly below was nectaring on the flower heads for over an hour. 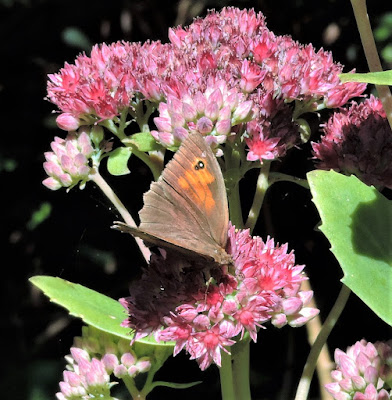 An interesting garden plant related to H. telephium fabaria is Hylotelephium 'Matrona' with upright stems and purple stained leaves and pale pink flowers in compact heads that are also very popular with butterflies and bees, especially in my garden, carder bees.  It has an Award of Garden Merit from the Royal Horticultural Society. 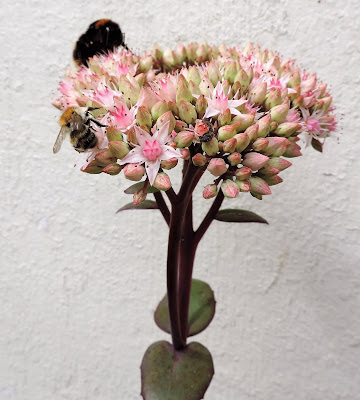 Another garden variety that must have much H. telephium in its genes is Hylotelephium 'Rosetta'.  This has the most beautiful rosettes (hence the varietal name I suppose) of blue green foliage as it develops in early spring and summer followed by rather small pinky-white flower heads.  It attracted few bees and no butterflies, but I did find the moth in the photo below busily imbibing nectar from the flowers.  It is a beautiful plume (Amblyptilia acanthadactyla), a species well-established in our garden and quite well-camouflaged on the flowers. 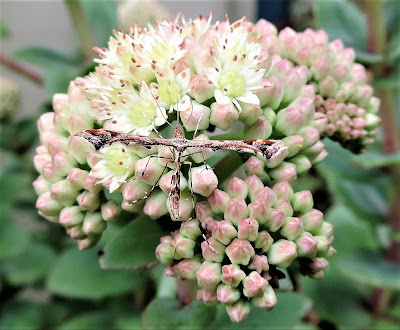 I have two other H. telephium varieties: the nominate subspecies H. telephium telephium and H. telephium maximum.  Both came from a seed distribution organised by the Sedum Society.  In the case of the nominate subspecies I raised seven seedlings several of which flowered in the same season, the flowers varying from pale to darker pink.  They were smaller that our native H. t. fabaria and had a tendency to spread sideways rather than grow upwards.  The mother plant grew by the 'river Ourthe, Warempage' in Belgium and I ought to try and investigate it further.

I found a small caterpillar on one of these plants and it turned out to be a migrant species, the pearly underwing (Peridroma saucia) which I bred to maturity and released. 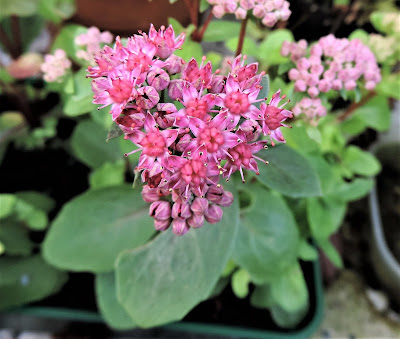 Hylotelephium telephium maximum is a white-flowered plant of mainland Europe, often growing in rocky places or on waste ground.  It has larger leaves and is generally more robust that the other subspecies of H. telephium I have seen.  I grew my plant from seed collected in Lozere in the south of France.   In Norway it is called smørbukk - butterball - perhaps because the creamy white flowers look slightly like a rounded lumps of butter.  As it is in its first year it has flowered quite late, but so far does not appear to be attracting any insects. 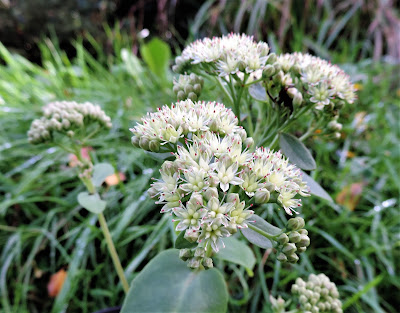 The real insect-attracting ice plants are Hylotelephium spectabile and its various forms, still generally sold as Sedum spectabile.  They seem to have a plentiful supply of nectar and are constantly visited by bees and butterflies.  However, because they get so efficiently pollinated they tend to go over quite quickly whereas the well known hybrid H. 'Autumn Joy' aka 'Herbstfreude' has longer lasting flowers but lacks nectar and is seldom visited by insects.  'Autumn Joy' is also sometimes the only Hylotelephium on sale in nurseries and garden centres and gets itself wrongly billed as attractive to insects.

The upper of the two pictures below is of Hylotelephium spectabile 'Brilliant' with a peacock butterfly and the lower of of H. 'Autumn Joy/Herbstfreude'. 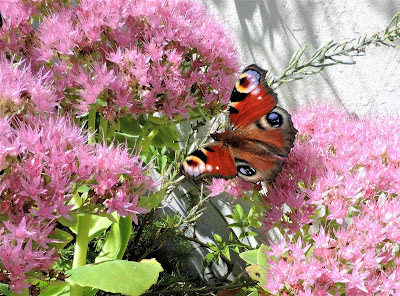 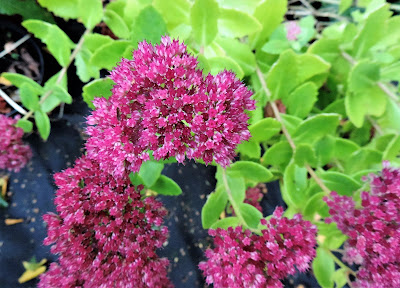 Posted by Patrick Roper at 4:41 pm