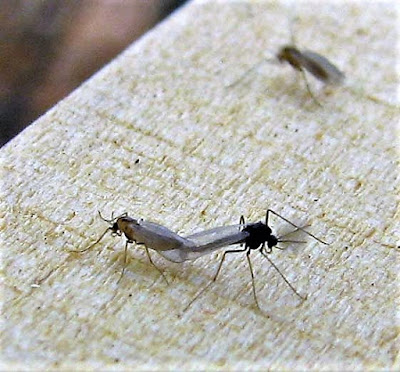 The decline of (flying) insects over recent years has once again hit the headlines following a study of 60 sites in Germany: http://www.bbc.co.uk/news/science-environment-41670472

I, and many other entomologists, have been aware of this for a very long time.  In the early 1960s I lived on a farm at Robertsbridge in the East Sussex Weald and spent much of my time collecting and studying mostly flying insects around the fields, hedges, woods, ponds and rivers in the area.  In most weathers there were swarms, often very large ones, of non-biting midges, short-palped craneflies and other insects in sheltered places alongside hedges, in woodland rides and around the wetlands.  I must have come across several hundred species most of which, fortunately, I recorded in notebooks which I still have.

One very abundant non-biting midge was Smittia aterrima, a species that breeds in cow dung.  Mainly in the cooler months of the year this would swarm in the lee of the field hedges in one continuous band many metres long.  It must have been a boon for any birds, bats and spiders that were about and I imagine that the little corpses that would have littered the ground were much appreciated by shrews, ground beetles and I am sure other animals.  These in turn supply food for predatory birds and mammals.  This midge has gone into steep decline since the widespread use of ivermectins to control internal parasites in cattle.  It effectively kills most, if not all, the many insect species that would have bred in the dung.  It should also be remembered that many bee species are thought to be in decline because of the use of neonicotinoids as dressings for crop seeds.

In the late 1970s we moved to the Peak District in Derbyshire and made many journeys around the area and to Wales, the Lake District and Scotland.  As recently reported, the cars' windscreens were thickly spattered with flying insects after most journeys, but this no longer happens.

Flying insects have also declined elsewhere.  Due to work and family pressures I stopped my entomological work from the late-1960s until the late-1970s.  On my first foray back into the field in Brede High Woods in East Sussex, I wondered where all the insects had gone.  The large swarms that were so familiar a decade before had vanished, though there were a few familiar species hanging on in small numbers.

Since then I have occasionally found sites with a fairly rich insect life, but never like those places I was familiar with in my youth.  I have, however, noticed that one or two species seem to be suffering less than others.  Those whose larvae live in mud, for example, rather than in water, dead wood or dung.  I am not sure why this should be.  One little warrior I am very fond of, and which is still quite common, is the winter-flying non-biting midge Gymnometriocnemus brumalis whose picture I have posted at the top of this page.  It is sexually dimorphic with yellow females striped with dark brown, and black males.  It is thought to breed in wet fallen leaves.  It can be very common, especially in woodland, and I have often seen small swarms on sunny mornings after hard frost.  It also occasionally forms a small swarm, of the kind that now seem so scarce, outside our sitting room window.  I have seen these gyrating lazily up and down in cold, hard rain and still do not quite understand how the midges avoid being hit by raindrops, though I surmise that each drop has a bow wave of air that can push a fragile flying insect out of the way.

In some cases species have no doubt declined to a low level but are still about and may recover once conditions are more to their liking.  Others I am sure will be locally and even globally extinct.  I think all we can do about it is continue with the good conservation work that has been developing and keeping a very close eye on the effects of agrichemicals on insect life and the food chain generally.  Whatever the case, the insects may often seem insignificant but the part they play, or no longer play, in our wider environment will bring changes that affect us all.
Posted by Patrick Roper at 2:15 pm