Along the garden path there is a place where an old, dead elder tree (Sambucus nigra) has fallen across a smaller, living example of the same species. 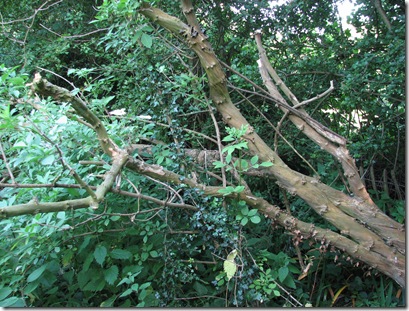 Together they make an attractive architectural and wildlife feature.  The dead tree has plenty of ear fungi on its upper branches and elsewhere and the smaller, living example has ivy ascending the trunk which holds up its dead sister.  It has a few flowers (centre left) but is also sending up some strong shoots for the future.

A good place to sit and meditate on life and death and an interesting little wilderness to try and mould into a semi-designed feature.

Posted by Patrick Roper at 8:01 pm